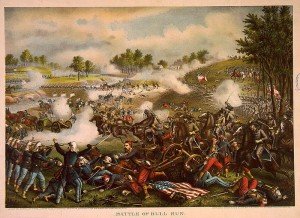 On Friday, March 30, historian Matt Atkinson will speak on the First Battle of Bull Run at the Harrisburg Civil War Round Table.  The meeting will be held This first major battle of the Civil War was a contest between inexperienced armies that resulted in a humiliating defeat for the Northern forces. It is also where General “Stonewall” Jackson earned his famous nickname. The talk will serve as an introduction to the Round Table’s May 19 field tour of the Bull Run battlefield which will be led by our speaker.

Matt hails from Houston, Mississippi,–a town which experienced Grierson’s Raid in the spring of 1863. He attended Ole Miss and graduated with a Bachelor of Business Administration and Bachelor of Arts in History. Matt is currently pursuing a Master of Arts in History at the University of Louisiana – Monroe. His thesis is on the Battle of Chickasaw Bayou or, as he would like to call it – “Dead Yankees in a Swamp.”

Growing up in Mississippi, Matt’s parents took him to nearby battlefields such as Vicksburg and Shiloh. Matt always asked, “Dad, did we win here?” and Dad always responded, “No, not here.”

Matt has published a manuscript by a Confederate staff officer entitled Drennan’s Letter. William Drennan witnessed many important events during the Campaign and Siege of Vicksburg. He will have copies of his book available for purchase ($8) after the program.