George F. Nagle’s two-volume The Year of Jubilee examines the black history of Harrisburg, PA, from colonial times through the Confederate invasion of Pennsylvania during the Gettysburg Campaign.

“Cold Pennsylvania nights and winter winds chilled freedom seeker Robert Brown, who escaped from Martinsburg, Virginia just before Christmas 1856. His wife and children had been sold away from him just days before, and when Brown realized he had no hope of preventing their sale, he ran away, crossing the Potomac River on horseback on Christmas night. He rode another forty miles before abandoning his horse and continuing on foot, arriving in Harrisburg after two more days. Local Underground Railroad activists discovered him and took him to their homes to feed him and exchange his freezing clothing for dry, nondescript clothing.”

So writes George F. Nagle in his fascinating new two-volume study The Year of Jubilee, which is certainly the most exhaustive and thoroughly researched study ever compiled on the black history of central Pennsylvania. His sweeping narrative in volume 1, Men of God, follows the legacy of slavery in Pennsylvania from the 1700s through its abolition in the early 19th century, and then the decades that the Underground Railroad provided passage for escaped slaves through the Keystone State. Volume 2, Men of Muscle, picks up the story through the climactic years of the American Civil War.

Nagle’s focus is on his native Harrisburg, but he nicely places the events within the context of the broader picture of black relations not only in Pennsylvania but also in the nation as a whole. It adds depth and perspective to his text and enables the reader to get a perspective on how Harrisburg’s black compared and contrasted with the situations faced by black men and women in other towns and places. 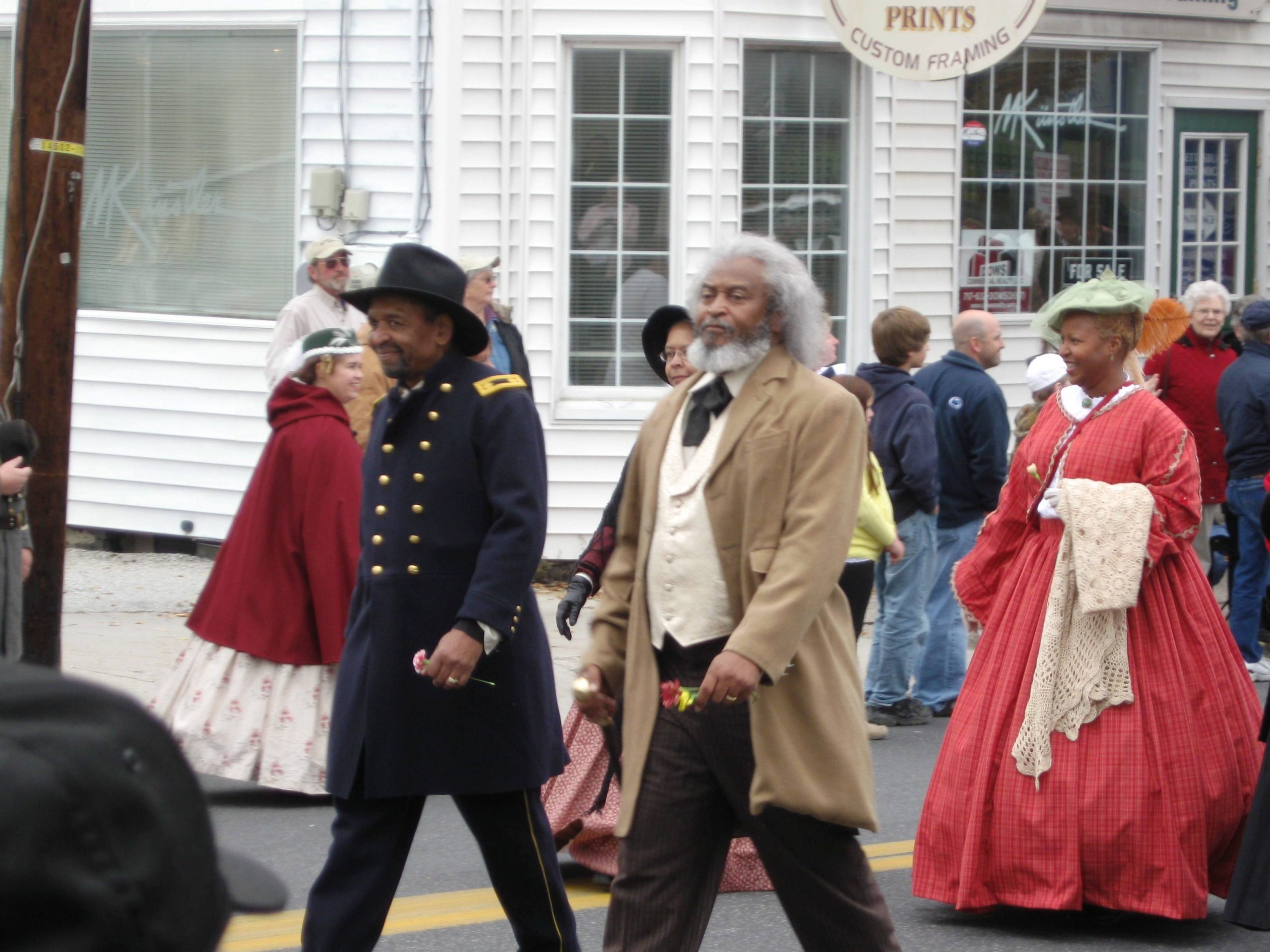 Author George F. Nagle, whose detailed website for the Afrolumens Project gives much more background on the quest to illuminate and preserve the black history of the Harrisburg region, summarizes his work thusly.

“Book description: In late June of 1863, Harrisburg’s African American community witnessed the influx of refugees streaming into town from the Cumberland Valley, fleeing the rapidly advancing invasion forces of General Robert E. Lee. Among the panicked and footsore mobs were hundreds of people of color like themselves who had abandoned their homes and businesses, most escaping with little more than the clothing on their backs, all in the hope of preserving the one possession that was most dear to them: freedom.

This book tells the story of the struggle faced by African American people in and around Harrisburg to establish their freedom, and to maintain it over the decades against the corroding effects of racism, economic hardship, and civil war.

It traces the beginnings of that community as it emerged from a legacy of slavery in the mid-1700s and follows it through the development of social institutions, ultimately achieving social and economic independence. The constant struggle by this community to defend that independence, and its resulting freedom, against everyone from paternalistic local lawmakers to predatory kidnappers, is a theme that runs throughout the book, culminating in the momentous decision in June 1863 to make a stand in Harrisburg against the Confederate invasion.
Volume one, Men of God, examines the institution of slavery in central Pennsylvania and explores the laws, social dynamics, and cultural forces that shaped that institution in this area. It follows the beginnings of a free black community in Harrisburg, including the appearance of black entrepreneurs, churches, social institutions, and beneficial societies. Later chapters cover the struggle waged by Harrisburg’s African American community in combating slavery, colonization schemes, and regular incursions by slave hunters and kidnappers. The gradual development of anti-slavery activities in conjunction with local white activists is covered in great detail, culminating in the development of the regional Underground Railroad network. Volume one concludes with the heady decade of the 1840s, a time of great excitement and successes by local anti-slavery advocates.

Volume two of The Year of Jubilee, Men of Muscle, picks up with the passage of the Federal Fugitive Slave Law of 1850. This volume further explores the complex relationship between Harrisburg’s black and white abolitionists, details the efforts and activities of each group as they worked separately at first, then learned to cooperate in fighting against slavery, and covers the role that each played in the shadowy and fast-changing world of the Underground Railroad. The violent decade of the 1850s brings the sobering realization that the forces of slavery will not be easily opposed.

The book concludes with the invasion of Pennsylvania by the battle-hardened troops of the Army of Northern Virginia, in June 1863, and the reactions of the local African American population to that cataclysmic event. It is a book filled with heroes, heroines, and villains, murderers, kidnappers and victims, courtroom drama, and secret plots. It places Harrisburg, Carlisle, York, and Lancaster in the middle of some of the most dramatic events of the antebellum era involving high treason, street riots, sensational kidnappings, and the potential for one final climactic battle that could forever change the lives of everyone in the capital city and possibly the entire North.
Topics include the 1850 Fugitive Slave Law, the Christiana Resistance, the James Phillips incident, the murder of William Smith, the various plots to rescue the Harpers Ferry raiders, Wide-Awakes, recruitment for the U.S. Colored Troops in Harrisburg, the invasion of 1863, and much more.”

“The Afrolumens Project exists to promote the collection, study and interpretation of data relating to African American slavery and freedom in central Pennsylvania and is dedicated to the idea that all Pennsylvania residents share a common history regardless of race, belief, or gender. The focus of this website is on the historical period that begins with European colonization and African slavery in Pennsylvania and ends with the American Civil War. In addition to being a repository and interpreter of historical data, the Afrolumens Project seeks to facilitate communication among scholars, educators, and researchers by making the collection accessible on this website without cost, to everyone interested.”

Free blacks, refugees from the Shenandoah and Cumberland valleys, and white residents of Harrisburg, Pennsylvania, dig earthworks to protect vital bridges and roads leading to the capital city in this 1863 illustration. Courtesy of the Library of Congress.

Essays by historians Peter Vermilyea, Ted Alexander, and others have touched upon the black history of Pennsylvania during the Civil War, focusing on the blacks of Adams and Franklin counties respectively as they struggled for survival of their way of life during the Gettysburg Campaign. Roving patrols of Confederate soldiers often rounded up the blacks and took them to the South to be sold into slavery. George F. Nagle’s two new works are a very worthy expansion of the historiography of the plight of blacks in Pennsylvania, not only during the war years, but in the decades leading up to America’s defining event.

Brilliantly researched, compellingly written, and thoroughly fascinating, The Year of Jubilee will leave the reader with extensive knowledge and understanding of the turbulent years when Pennsylvanians first owned slaves, then helped protect runaways from the South (or helped capture them and turn them in for bounties), and finally reacted as a community, both black and white, to prepare Harrisburg’s defenses as Lt. Gen. Richard S. Ewell’s Second Corps threatened in June 1863.

But this is more than the definitive work on central Pennsylvania’s race relations during the latter part of the 18th century through the middle of the Civil War. Much more. It is a microcosm of the entire Northern reaction to the growing issue of slavery, and how to deal with a changing political and social landscape where acceptance and mutual trust were slow to be adopted between not only races but ethnicity as well. Nagle sweeps aside prejudices and stereotypes to present a narrative history that neatly captures the essence of the times.

The Year of Jubilee is available on the Internet from amazon.com for a list price of $29.95 per volume. For those Cannonball readers in the Harrisburg area, both volumes of the Afrolumens book are available at the Mid-Town Scholar Bookstore, 1302 N. Third Street, Harrisburg, for only $24.95 each.