The Civil War: The Story of the War with Maps 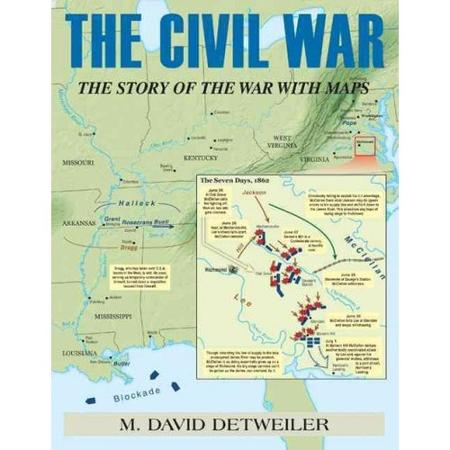 Harrisburg, Pennsylvania, author and researcher M. David Detweiler is perhaps best known for his interesting book Gettysburg: The Story of the Battle with Maps which came out in 2013. Now, a year later, he is back with a similar effort covering the entire Civil War. He uses the same style of maps and text to tell the key events of the war, beginning with “Bloody Kansas” and continuing through the final days of the Appomattox Campaign and the assassination of Lincoln. It does not cover the surrender of Johnston or the western armies.

The Civil War: The Story of the War with Maps (Stackpole Books, 2014; ISBN 978-0-8117-1449-5) checks in at 158 pages, nearly all of which feature one large overview map or two or more smaller battle detail maps. Chapters are arranged chronologically by year, following a brief introduction and prelude.

The maps (more than a hundred of them!) are all in full color and useful in giving a sense of the grand tactical situation as the campaigns and battles play out. The accompanying prose is succinct in describing the actions of the opposing armies and their principle commanders.

M. David Detweiler graduated from Yale and has worked as a journalist and editor and published short stories and novels.  Detweiler is an amateur military history buff, composer, and sometime fly angler. President and CEO of Stackpole Inc. for the past quarter century, he lives in Harrisburg, Pennsylvania, with his wife and enjoys chasing the unsolvable what-ifs of history.

Here some of the advance praise for this new book:

“A lucid narrative plus clear, easy-to-read maps that portray both strategic and tactical operations make a splendid combination in this valuable volume. It can be read cover to cover as a complete military history of the Civil War, or consulted as a reference work on specific campaigns and battles. It is a book that Civil War experts as well as novices will find indispensable.”–James M. McPherson, author of Embattled Rebel: Jefferson Davis as Commander in Chief

“Any reader–or historian!–who has yearned for a simple, comprehensible, vivid map to accompany the story of a military campaign, a battle, or a mere skirmish, need now look no further than David Detweiler’s useful and highly attractive compilation. It is good to have a volume that combines an understanding of military movements of the period and accessibility to modern technology to create understandable cartography of the scenes.”–Harold Holzer, Roger Hertog Fellow, New-York Historical Society

“The American Civil War is of course intimately linked with the American landscape. Understanding that topography, and visualizing the movements of armies over it present a constant challenge even to seasoned readers. M. David Detweiler’s The Civil War: The Story of the War with Maps presents a fresh and invaluable companion for anyone who wants to understand what happened whether reading in an armchair, or touring on the battlefield…The approach is innovative, and very effective.”–William C. Davis, author of Crucible of Command: Ulysses S. Grant and Robert E. Lee

“For readers addicted to histories or novels about the Civil War, a common challenge is the lack of adequate maps. This excellent volume satisfies that need, once and for all: It’s the clearest, fullest collection of strategic and tactical maps available, a fine volume on its own and an indispensable aid to understanding many another book. Few works truly are ‘must-haves’ for a Civil War collection, but this one’s essential.” –Ralph Peters, author of Cain at Gettysburg and Hell or Richmond

Update: Sadly I have learned that author David Detweiler passed away recently before his book was published. His contributions to this field will be missed.