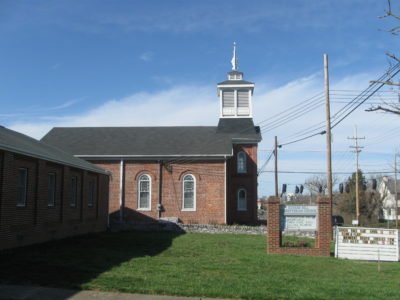 One of the two churches at Bunker Hill, WV, that the 87th PA defended during the 2nd Battle of Winchester. (Scott MIngus photo)
Posted by Scott MingusJune 14, 2018October 4, 2020 Battlefields, Confederates, Yankees, York

On Friday, June 12, 1863, elements of the 87th Pennsylvania Infantry, raised primarily in York County, engaged in a sharp firefight with Confederate Maryland cavalry under Maj. Harry Gilmor along today’s Route 11 south of Winchester, Virginia. This skirmish marked the opening shots of what became known as the Second Battle of Winchester, culminating in the early morning hours of June 15 with the surrender of almost half of the regiment at Carter’s Woods after Maj. Gen. Robert H. Milroy desperately tried to get most of his 8,000-man division of the Eighth Army Corps out of the growing encirclement at Winchester. He failed miserably. In total, Milroy, who abandoned the field with his staff and cavalry escort during the ill-fated fighting, lost more than 4,000 prisoners.

On Sunday, June 14, Milroy had stayed put in Winchester, against the orders of the War Department in Washington, D. C. “All day Sunday Milroy was up on a look-out forty feet above the works with a field glass in hand watching Lee’s veterans closing around our brave and devoted little army,” the 87th Pennsylvania’s Lt. Col. James A. Stahle later penned. “What an uncomfortable time we had,” he lamented. “No sleep, nor rest, for two days, rations getting short, everybody wet to the skin, all ready for immediate action, with the outlook anything but assuring. We knew we were being surrounded on all sides,” Stahle continued, “that rebel pickets were out on every road, is it any wonder that men became despondent and lost heart.” 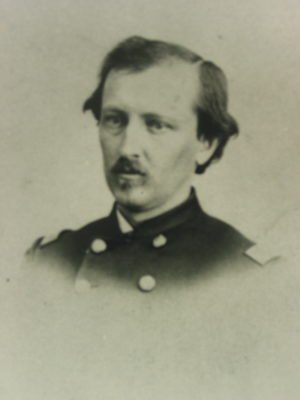 York merchant and civil engineer John W. Schall served as the colonel of the 87th Pennsylvania and was Stahle’s immediate commander. Photo is courtesy of the United States Army Heritage and Education Center in Carlisle. Schall, a native of Berks County, had enlisted in 1861 at York. He was 27 at the time he became a soldier.

Part of Schall’s combat-inexperienced regiment, which had largely been on guard duty since their inception, was posted at Bunker Hill to protect the road network there, while the rest was in Winchester with Milroy’s main force. The latter force, under Schall’s immediate supervision, spent most of June 13, manning rifle pits south of Winchester. Confederate cavalry drove the companies away from Bunker Hill. They retired to rejoin the regiment at Winchester, but not before losing several men and officers.

On the 14th, as the Rebels encircled Winchester, the reunited 87th Pennsylvania fought with the Marylanders and other Confederates in often-bitter street fighting. Lieutenant Colonel Stahle later reported that the Rebels were firing from the rooftops and windows at his men before they secured the town, at least temporarily.

Some of the 87th’s men later entered a nearby cemetery and took shelter to snipe at the enemy troops. The regiment later retired to the Main Fort (also known as Fort Milroy), where they witnessed the fall of the nearby West Fort to the Louisiana Tigers, a Confederate group that would later be part of the forces that would occupy York two weeks after Second Winchester.

On June 15, Milroy’s men retreated after abandoning Winchester, leaving behind their artillery and wounded/ill soldiers in the care of army doctors and chaplains, including those of the 87th. A few miles north of town, they found their path blocked by Johnson’s Division of Confederates. Milroy’s force, including Schall, Stahle, and the 87th PA, tried to cut their way out to safety. Half failed and were captured. The remaining men made their way to Harpers Ferry or to Everett, PA. Some returned to York, where they helped defend the Columbia-Wrightsville Bridge against many of the same Rebels that they had fought on June 13-14 at Second Winchester.

To learn more about the 87th Pennsylvania’s fighting at Second Winchester, I recommend three books.

* The Second Battle of Winchester: The Confederate Victory That Opened the Door to Gettysburg, by Eric J. Wittenberg and Scott Mingus (the definitive recent study of the Second Winchester fighting)

* From Home Guards to Heroes: The 87th Pennsylvania and Its Civil War Community (an award-winning study of the entire wartime service of the regiment written by Dennis W. Brandt)

* History of the Eighty-Seventh Regiment, Pennsylvania Volunteers, by George R. Prowell (a 19th-century history based upon interviews with surviving veterans).