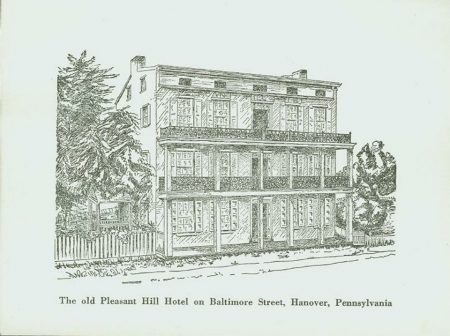 The battle of Hanover, fought June 30, 1863, remains the bloodiest and largest military conflict in the history of York County, Pennsylvania. Casualties amounted to more than 300 men. That tally paled, of course, with the subsequent three-day battle fought at Gettysburg in Adams County less than 15 miles west of Hanover. Still, the savage fighting at Hanover, which at times swirled through the streets, created an urgent need for medical care for the fallen troopers. Hanover, like its much larger neighbor York, did not have a public hospital at the time. Union cavalry commander Judson Kilpatrick left a handful of surgeons and stewards behind to treat the wounded. At least six local civilian doctors (George Hinkle, Henry Eckert, Horace Alleman, Jacob Smith, John Culbertson and William Bange, a dentist) volunteered to assist.

Some of the wounded, both blue and gray, were initially taken to the Dutch Reformed Church. Citizens such as Karl Forney, on whose farm some of the action occurred, also opened their doors. On July 1, the army began more formal arrangements. Dr. Perin Gardner of the 1st West Virginia Cavalry secured the use of Eckert’s Concert Hall in Centre Square, Marion Hall on Foundry Alley, Albright’s Hall on Broadway, and the Pleasant Hill Hotel on Baltimore Street. Local carpenters constructed sturdy wooden bunks for the patients housed in Marion Hall. Over time, the Pleasant Hill Hotel became the primary army hospital in Hanover, with Dr. Gardner in charge. Townspeople furnished food and drink for the 150+ remaining convalescents, many of whom were recovering from major surgery including amputations.

According to one newspaper reporter (biased by his anti-Lincoln political views), within a few weeks, some citizens became weary of the burden of feeding and ministering to these wounded men. That led, according to the newsman, to the army packing up the hospitals and moving the men and supplies elsewhere. Army records suggest other reasons, including the desire to consolidate the wounded from the Gettysburg-Hanover area and reduce the number of temporary sites scattered across several counties.

Here is the story, from the Hanover Citizen as reprinted in the York Gazette of August 18, 1863.

“The wounded soldiers who were in the Hospital of this place, were removed yesterday to the Hospitals of Baltimore and other places. The horses and equipments are to be taken to Gettysburg. This Hospital was under the charge of Surgeon P. Gardner, through whose strict attention to business and capability as a Surgeon, the wounded and sick were rapidly improving.  Surg. G. labored hard to render his men comfortable, and was much esteemed by all his men who were under his care. Through his strict attention to the wounded and sick, and gentlemanly conduct he has won many warm friends during his short stay in this place. We understand the object or cause for the removal is owing to some of the citizens of this place trying to prevent the furnishing of eatables, &c., to the wounded. The individuals who are the instigators, or leaders of this affair, are those brave ‘patriots’ who denounce all persons who possess purer principles than themselves, as ‘Copperheads’ and ‘traitors.’ However, such acts as these must be attributed to a lack of a sound mind or a want of pure patriotism.”

NOTE: Mark your calendars for Wednesday, October 16, 2019, when I will present a PowerPoint presentation on the various Civil War hospitals in York County, including the 1,600-bed hospital at what is now Penn Park. This free lecture is at 7 p.m. at the York County History Center’s museum at 250 E. Market Street in York. The sponsor is the York Civil War Round Table.