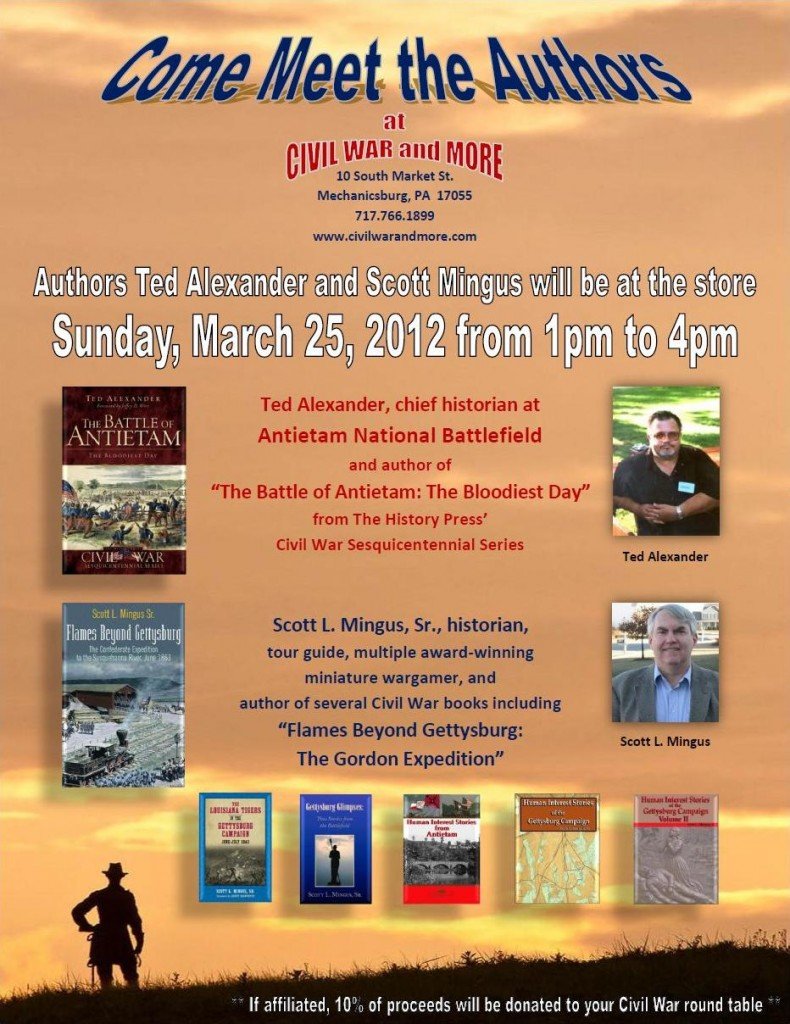 Ted Alexander, Chief Historian of Antietam National Battlefield, and Scott Mingus, an author who had three family members fight at Antietam, will hold a joint book signing on Sunday, March 25, 2012, from 1:00 until 4:00 p.m. at the Civil War and More Bookstore in Mechanicsburg, Pennsylvania (near Harrisburg). If you mention that you are a member of a local CWRT store owner Jim Schmick will donate 10% of the profits from your book purchase to that particular Civil War Round Tables.

Come out and talk Antietam, Gettysburg, or any other Civil War topic with Ted, Scott, and Jim. pick up a few great books, and support the CWRT.

One of the books for sale at this very special signing, Flames Beyond Gettysburg: The Confederate Expedition to the Susquehanna River, June 1863, is a finalist for the U.S. Army Historical Foundation’s 2011 Distinguished Writing Award for the reprint category. Ted’s fine new book on Antietam has drawn rave reviews in this, the 150th anniversary year of the battle.

If you go: Civil War and More is located just off U.S. Route 15 and not far from the Pennsylvania Turnpike/I-76, I-81, and other major roads leading to the Harrisburg region.

The store is located at 10 South Market Street in downtown Mechanicsburg, Pa.

From I-81, exit at Route 114 and travel toward Mechanicsburg (about 5 minutes).  At the traffic light on Main Street in Mechanicsburg turn left.  Turn right at Market Street.   Civil War and More is on the right, across from the PNC Bank.

From Route 15, exit onto Route 114 and travel toward Mechanicsburg (about 5 minutes).  Civil War and More is on the left, just before the square, across from the PNC Bank.