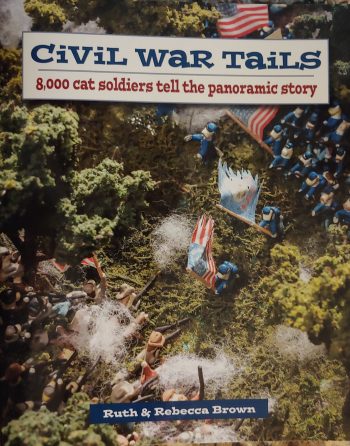 Your Cannonball editor has been enjoying some vacation with the family, engaging in a series of talks in various states on some of my Civil War books, and catching up on yard maintenance. I have also been reading several books over the past month that might be of interest. Perhaps the strangest, most unusual, and certainly entertaining of these summer reading books is Civil War Tails: 8,000 cat soldiers tell the panoramic story.

Twin sisters Ruth and Rebecca Brown since childhood have been fascinated with cats and with Civil War history. They began combining these seemingly unrelated topics by creating two small clay model cats in June 1995 and fashioning them as Robert E. Lee and Ulysses Grant. From there, they made a handful of soldiers and began having tabletop battles with them. Over time,  the sisters modeled hundreds of cats with tiny muskets, swords, drums, bugles, etc., and began in set them out in stationary  diorama-type settings. Examples includes Fort Sumter, Pickett’s Charge, the Andersonville prison, etc.

Their collection grew considerably (more than 8,500 clay cats!) to the point where they decided to enlarge it even further and put in on public display in Gettysburg for others to enjoy.  The Browns moved to Gettysburg in 2013. Two years later, they opened Civil War Tails at the Homestead Diorama Museum in the former 19th-century orphanage on Cemetery Hill. The address is 785 Baltimore Street if you want to see this impressive, through definitely eclectic, collection.

If you can’t go, Stackpole Books in 2018 published a full-color, lavishly illustrated and well-composed book of the Brown sisters’ creations. The picture book checks in at 200 pages, with almost each one having at least one photograph of the ladies’ clay cats and their supporting cast, including 400+ sculpted tiny horses. Ruth and Rebecca have created buildings (such as Fort Sumter), trees, fences, hills and valleys, tents, campfires, and all sorts of supporting diorama features.

Here are sample pages from this engaging book. 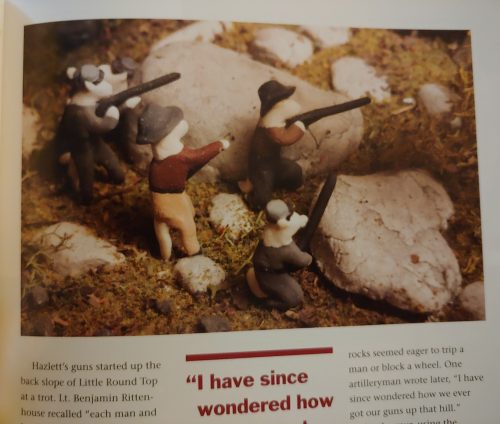 A clay officer directs the fire of Confederate sharpshooters from the rocks at Devil’s Den toward distant Union artillerymen on the military crest of Little Round Top. The Browns not only provide photos of their creations, the accompanying text is interesting, combining pertinent battle narratives with the history of the dioramas. 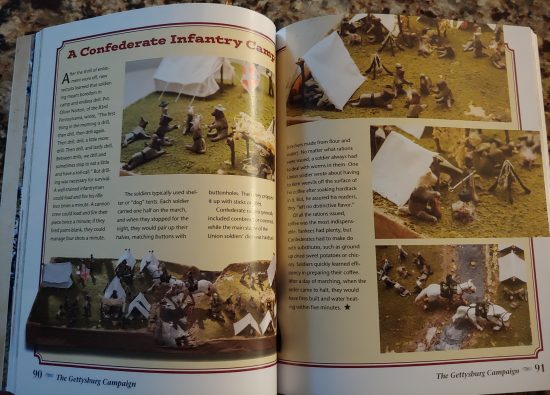 The book is chockfull of pages similar to this one, which shows a group of cat soldiers lounging in their tiny campsite somewhere on the battlefield.

The museum is certainly out-of-the-ordinary. Some observers have criticized the Browns for displaying the dioramas as a mockery of the battle. However, the majority of viewers seem to enjoy the light-hearted displays, which the twins has fashioned in their own unothodox way as their own personal tribute to the soldiers of the past. I am a miniature wargamer who creates diorama-like settings for refighting Civil War battles (see my Charge blog at https://scottmingus.wordpress.com/ for many examples of my wargames and my friends’ games). As such, I have some appreciation for the time and effort it took the twins to lay out their 40-square-feet “Fate of Gettysburg” diorama and their even larger 11-foot-long detailed model of the fighting on Little Round Top.

Well done, ladies, well done. And, kudos to Stackpole for documenting the twins’ creations for all to enjoy.