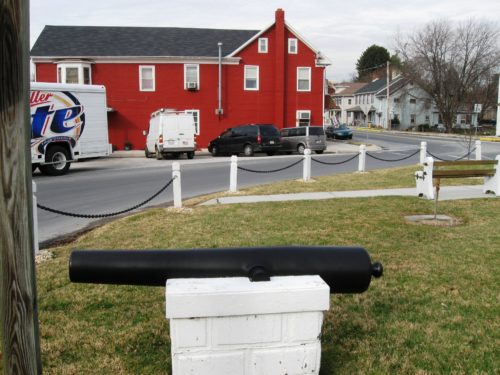 A view of the town square in Jefferson, Pennsylvania, (also known as Codorus Post Office during the Civil War) looking to the northwest down Berlin Street. The unusual iron Napoleon cannon tube was the subject of an earlier Cannonball entry. William T. Crist’s dry goods store once occupied the large brick building during the Civil War. Rebel troopers paid a visit to this building during Maj. Gen. J.E.B. Stuart’s June 30, 1863, pause at Jefferson. The white house in the upper right was the home of the G. Kraft family. Most photos taken by Scott Mingus on December 18, 2008.
Jefferson, a small village in southern York County, saw three different armed forces of cavalry pass through its town square during a single week in the Gettysburg Campaign. It was first visited on June 27, 1863, by Lt. Col. Elijah V. White and the 250-man 35th Battalion, Virginia Cavalry, which had trotted into town from Hanover Junction to the northeast and then took the road in the upper right of this photo northwesterly toward Spring Forge (now Spring Grove). On June 30, twenty times the number of Confederate cavalrymen would ride through the town square… and then on July 1, it would be Union cavalry that passed through Jefferson, this time to the welcome of the townspeople. 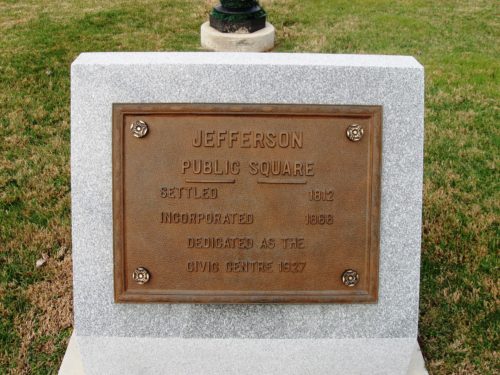 In 1863, of course, Jefferson’s very nice traffic circle and its adornments were not present. The town square was a dusty (or muddy, depending upon the prevailing weather) open area, surrounded by several large brick multiple-story houses and businesses. Several of the very same buildings from the Civil War-era still exist. 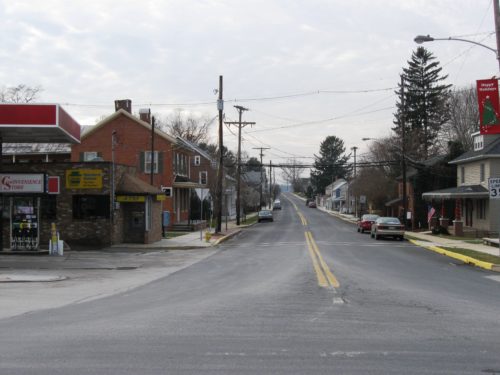 View looking southwesterly on Hanover Street. Stuart’s 4,500 men (accounts vary as to his exact strength following the Battle of Hanover on Tuesday, June 30, 1863) wearily departed Hanover in a series of movements timed to withdraw from the battlefield while protecting the rear of the column. About four o’clock in the afternoon, the lead elements of his cavalry corps, Brig. Gen. Fitzhugh Lee’s brigade) entered Jefferson’s square from the southwest using this road. The gasoline station sits on the site of the 1863 Elias Schwartzbaugh pottery. Young Eli was to become one of the town’s wealthiest citizens as his business grew. The house of his father, John A. Schwartzbaugh, was next door to the pottery. John had founded the business in the 1830s, and also farmed in Manheim Township. He purchased the land on the town square in 1856 and moved his pottery there.

The red brick house to the left center was the home of businessman Henry Rebert. He owned a tannery, and “Lige” White’s Confederate raiders on June 27 had set fire to a railcar sitting at Jefferson Station. The car was filled with tanbark destined for Rebert’s usage. it would be one of the few cases of arson in the Jefferson area by the Confederates.
Upon his arrival, Stuart “immediately took possession and planted cannon on the hills north and south of the village, expecting soon to be attacked by Gen. [Judson] Kilpatrick’s cavalry. Guards were stationed all around the town, and no one permitted to leave it,” according to John Gibson’s History of York County (1886). 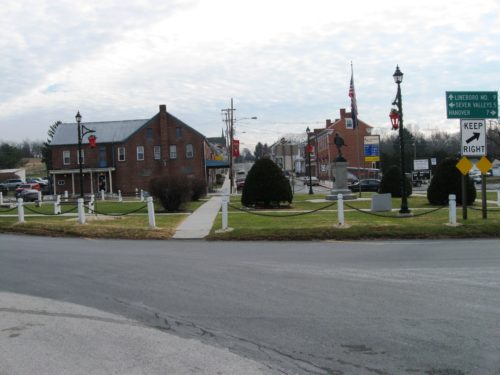 Stuart’s column would have passed from right to left in this modern photo, shown looking southeasterly toward Baltimore Street, which becomes the road to Glen Rock and eventually LIneboro, Maryland. Albert Kraft‘s dry goods store (formerly Jacob Spangler’s) occupied the brick building on the left. Rebels also paid a visit to this establishment, which was also the Post Office. Next door was S. Hoffman’s blacksmith shop, a popular stop for the Rebels while in Jefferson.The brick home diagonal across the street to the right was the J. Runk house in 1863. York lawyer John Gibson continues his 1886 narrative, “Many persons of this locality had been deluded by the pretensions of a league, which claimed to be able to protect them from injury and their horses from capture if they joined it. In consequence of this, very few horses and valuables were taken eastward to avoid capture. It was a rich harvest for the marauding hordes, and about 100 horses were taken in the town and vicinity.” 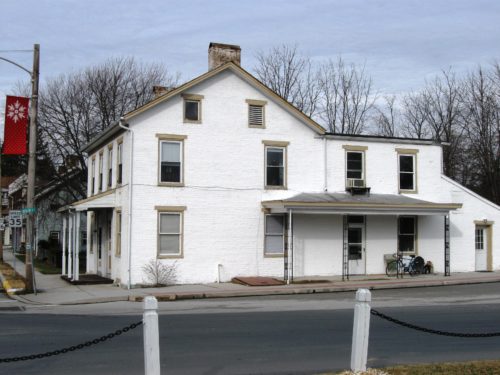 Some Confederates took advantage of an opportunity to pause and relax a little. A few asked for food, and some Jeffersonians complied or were forced to comply. Among those Rebels seeking nourishment and a welcome break from the monotony of the hours of riding up and down York County’s undulating hills was Capt. John Esten Cooke (see my earlier blog entry for specifics of his meal in Jefferson), who arrived just before dusk and entered a building on the square, possibly this very house on the west-northwestern corner of the square). Cooke related, “The young hostess had placed my supper on a table in a small apartment, in which a side door opened on the street; through this some felonious personage had entered–hot bread, milk, coffee, eggs, and ham, had vanished down some hungry cavalryman’s throat.” Certainly this house fits Cooke’s general description, and the side apartment even today opens onto the street where the main column would have passed that warm summer afternoon and evening. 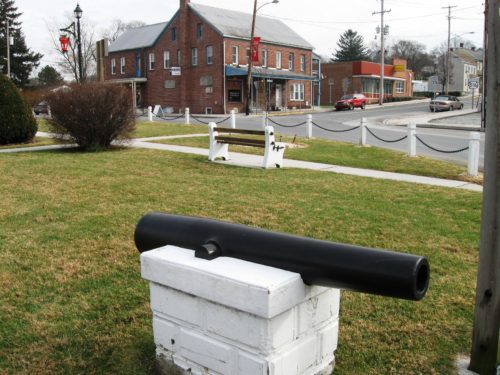 Stuart’s column headed northeasterly from Jefferson along York Street (which becomes Green Valley Road) seen to the extreme left of this photo. For several hours on June 30, 1863, first Fitzhugh Lee’s brigade, and then Col. John R. Chambliss’s brigade and a captured train of 125 Union supply wagons, passed by en route toward York (later that night they would be diverted to Dover when news came that the infantry division of Jubal Early had already departed York). Finally, well after dark, Stuart’s rear guard, the brigade of South Carolina planter Wade Hampton III, wearily rode through Jefferson’s square. The tail end of the Rebel column passed through town nearly 11 hours after Fitz Lee’s vanguard. They had fought a minor skirmish with a Union reconnaissance patrol southwest of Jefferson. 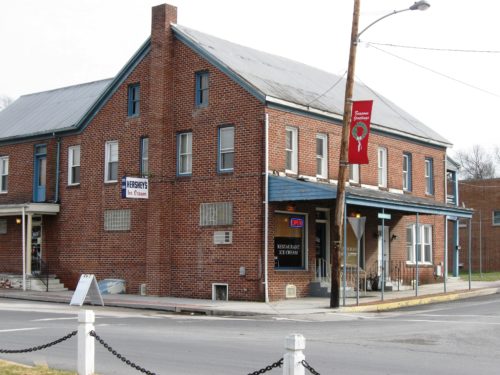 As of December 2008, this Civil War-era building on the town square along Baltimore Street housed Wolfanoto’s restaurant, where the author had an excellent submarine sandwich for his lunch before returning to his office in nearby Spring Grove. Back in 1863, this was another store, Albert Kraft’s, and scores of Confederates paused to take advantages of the goods sold at the time (which did not include delicious Italian cold cut submarines!). 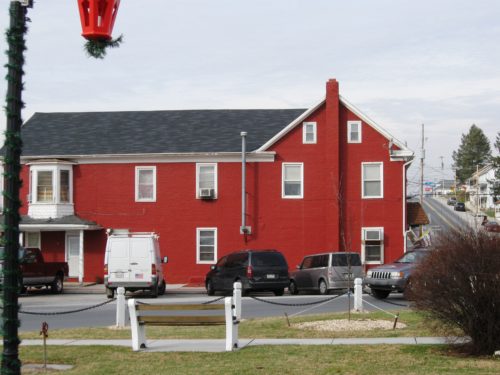 Another view of the 1863 store on the west-southwestern side of the town square. John Gibson related, “The behavior of the Confederate soldiers here was not in keeping with their conduct elsewhere in the county. Many of them were exceedingly tired and hungry from the exhaustive march. They demanded all the food that could be obtained, stopped several market wagons, and robbed them, even went to the bee-hives and took the honey, and ransacked the stores of William Crist, Albert Kraft and Jacob Rebert.”
William T. and Louisianna Crist lived n Wiota (a hamlet between Jefferson and Spring Forge). They had moved there in 1856 after selling their house and land on Jefferson’s square to John A. Schwartzbaugh (the potter). Jacob Rebert’s store was at Jefferson Station (on today’s Kraft Mill Road; he also was the postmaster and the father of tanner Henry Rebert, whose house was shown earlier in this entry). Rebels took 2 barrels of rye whiskey from the store. 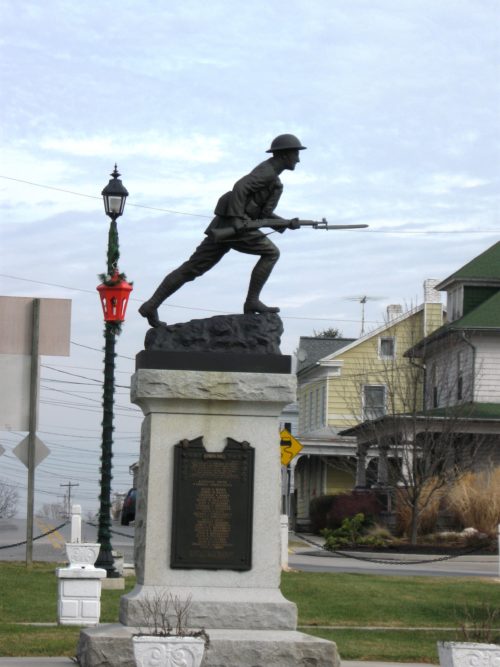 This view was taken looking northeasterly on York Street / Green Valley Road, which leads toward Hanover Junction, New Salem, and York. Gibson concluded his brief description of Stuart’s pause in Jefferson, “The last of this army passed through the village about 3 A.M., Wednesday, from thence to New Salem, to Dover, to Dillsburg, to Carlisle, and from thence to the battle of Gettysburg.” 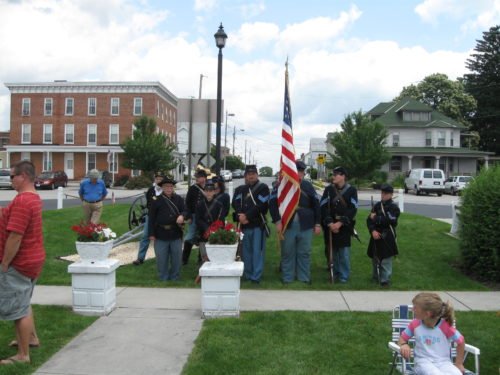 The modern traffic circle in Jefferson’s town square has the fore-mentioned Civil War artillery tube, as well as this impressive memorial to area residents who served in the Great War, World War I. Some of these soldiers were direct descendants of Jefferson’s 1863 families which had been touched by the Civil War passage of three distinct cavalry forces. On the last Saturday in June 2009, I will be speaking at the dedication of a new memorial in the traffic circle that commemorates Jefferson’s Civil War heritage.