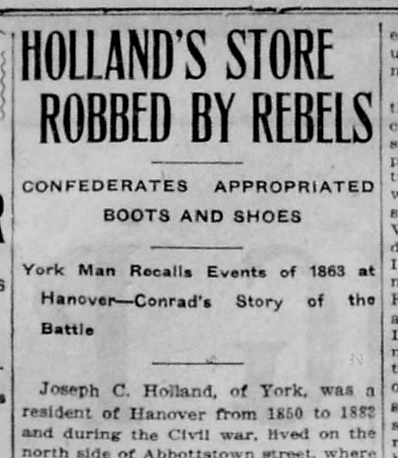 On the morning of June 17, 1863, Joseph C. Holland, like his fellow businessmen and shopkeepers in Hanover, Pennsylvania, could not have imagined the trouble that lay ahead in the days to come. Way down in Northern Virginia, more than 65 miles away, Lt. Col. Elijah V. White saddled his favorite warhorse and led some 150 men of the 35th Battalion, Virginia Cavalry out of their camp at Snickersville. They headed north to raid the B&O Railroad at Point of Rocks, Maryland, an event that would warrant only a few lines in the Hanover weekly newspapers. White’s men chased off Union cavalry defending the depot, severed the telegraph lines, and burned a locomotive and train of cars before returning to Snickersville to rest, re-equip, and recruit dozens of new soldiers to replenish the ranks depleted since the battle of Brandy Station.

Little did Holland, a small-town shoe salesman by trade for more than a decade, or White, a graduate of Kenyon College out in Ohio and a participant in the late-1850s fighting in “Bloody Kansas,” know their paths would intersect just ten days later.

In July 1905, York County historian George R. Prowell sat down with an aged Joseph Holland at his home in York and recorded his memories of “Lige” White’s long-ago wartime visit to Hanover, as well as the battle of Hanover a few days later.

“Joseph C. Holland, of York, was a resident of Hanover from 1850 to 1882 and during the Civil war, lived on the north side of Abbottstown street, where Valentine Wentz now resides. In 1863, he kept a shoe store on the west side of Baltimore street, near the square. When Colonel White’s Virginia cavalry came to Hanover on Saturday, June 27, 1863, some of the soldiers entered his store and took, without permission, a number of boots and shoes. A large portion of his stock, however, he had taken to a house in Pennville and to the cellar of his residence on Abbottstown street. He was standing in the square when Colonel White and his men approached that portion of the town and while the entire band of about 240 mounted men were halting for a time in the square, a few soldiers rode in front of his store.

“Harry Rentzel then had a tailor shop adjoining the Holland shoe store. The confederate soldiers demanded that Rentzel should open the store and let them in. Mr. Holland was called down to his store. The soldiers still on horseback, pointed a revolver at him. Mr. Holland said, ‘I don’t like that, and you are cowards if you continue it. If you want to go into my store, I will open it.’ A few of the soldiers quickly dismounted and ransacked the whole store. Soon afterward Colonel White and his troopers moved on toward Hanover Junction, where they burned bridges and the next day joined General Early’s division at York.

“On the morning of June 30, 1863, when General [Judson] Kilpatrick’s [Union] division entered Hanover, coming up Frederick street, Mr. Holland, with many other citizens, watched the cavalrymen passing through town out Abbottstown street. When the citizens began to feed the tired and hungry soldiers, he went up to his residence on Abbottstown street, where his family were preparing lunches for the union soldiers. He handed out these lunches to soldiers as they passed by, until all the bread and cakes in the house were given away. When the rear of the Fifth New York cavalry passed his house a squad of them stopped in front of the residence of Major Frederick Metzger situated on the same side of the street a few doors below Mr. Holland’s home.

“Major Metzger had commanded the Hanover infantry, a company of eighty soldiers in the War of 1812, and took part in the battle of North Point [in Baltimore County, Maryland]. At this time, the major was nearly eighty years old.  The arrival of the troops aroused his military ardor and his patriotism. Standing upon his doorstep, he began to address the New York cavalrymen, urging them to be true to their colors and their country, as their forefathers had done in the Revolution and in the War of 1812. Some of the soldiers dismounted, while others remained on their horses. When the aged man had finished his brief speech, the soldiers all mounted their horses and gave three cheers for the ‘Veteran of the War of 1812,’ and passed out Abbottstown street, telling the citizens that the Eighteenth Pennsylvania cavalry was in the rear and that they too should be fed.

“Not long afterward the Eighteenth Pennsylvania cavalry, or a part of this regiment came dashing out Abbottstown street closely pursued by the Second North Carolina cavalry firing their pistols and shouting like demons. The Confederates drove the Union troops as far out the street as the railroad. Here the union troops reformed and quickly drove the enemy back across the square and out Frederick street. Meantime the Fifth New York cavalry had formed in line of battle on the north side of the public common and soon afterward charged through the town, helping to drive the enemy out the Westminster road. During a lull in the fight, a Union soldier in front of Mr. Holland’s house, was placing caps on his carbine when Mr. Holland told him that there were two Confederates in the alley back of Abbottstown street, near the schoolhouse. He immediately went to find them. After a few shots had been exchanged from the carbines a hand to hand encounter took place, in which sabres were used. The three soldiers were all wounded, but not fatally. When the fight was over they were removed to the hospital.”

NEW THIS SUMMER AND FALL! Guided tours of the battle of Hanover are available to the public for a nominal charge. Contact host Marc Charisse for current times and pricing. Phone: 717-739-8364. Email: hanoverheritage@gmail.com.