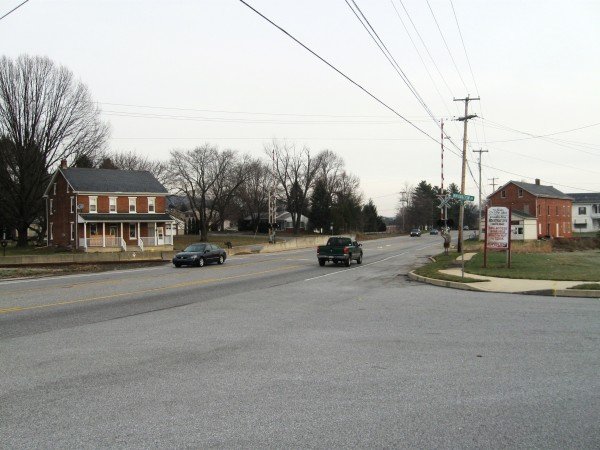 Stony Brook is a small neighborhood east of York, Pennsylvania, near the intersection of the old railroad from York to Wrightsville and today’s State Route 462 (at the time of the Civil War the York-Wrightsville Turnpike).  On Sunday afternoon, June 28, 1863, almost 2,000 Confederate soldiers from Georgia, fronted by Maryland and Virginia cavalrymen, marched through this intersection headed to Wrightsville in what turned out to be a futile attempt to seize the strategically important bridge over the Susquehanna River.

Back in 1863, this area boasted a few sturdy brick homes, barns, a blacksmith shop, and other buildings. The name Stony Brook does not appear on period maps, and first came into widespread usage in the two decades after the war. A scattering of these old buildings still remain, along with a few structures erected in the second half of the 19th century.

Shortly after the Confederates marched back through the area on Monday, June 29,  one of the wartime residents wrote a letter to a relative in Baltimore describing the interplay between the civilians and the soldiers. A portion of this note appeared in the July 8 issue of the Baltimore Daily Gazette and remains the only known written account of Brig. Gen. John B. Gordon’s Georgians as they passed through the vicinity. 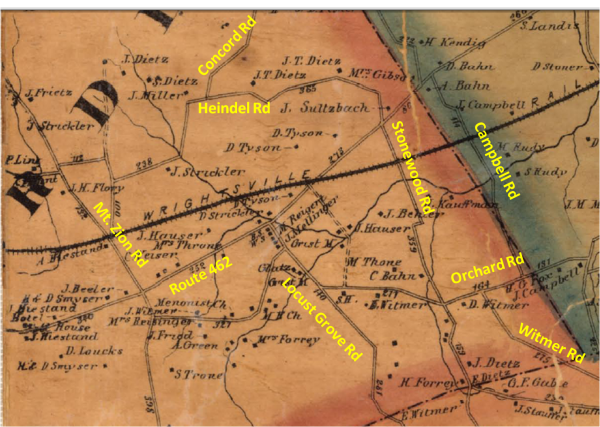 This portion of the 1860 Shearer & Lake map of York County shows the Stony Brook region. The wartime turnpike is now Route 462. One of the residents shown on this map likely was the author of the following letter which was republished in the Baltimore newspaper. 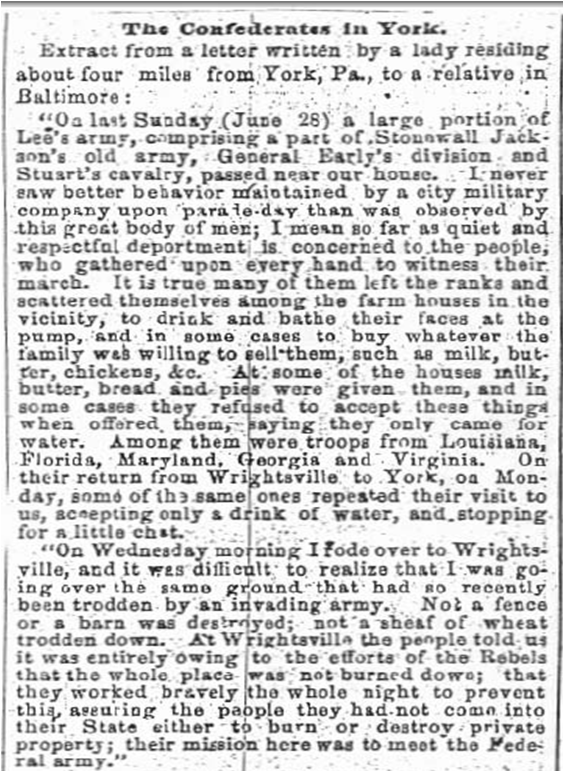 The woman wrote, “I never saw better behavior maintained by a city military company upon parade day than was observed by this great body of men; I mean so far as quiet and respectful deportment is concerned to the people, who gathered upon every hand to witness their march.

It is true many of them left the ranks and scattered themselves among the farm houses of the vicinity, to drink and bathe their faces at the pump, and in some cases to buy whatever the family was willing to sell them, such as milk, butter, chickens, &c. At some of the houses milk, butter, bread and pies were given them, and in some cases they refused to accept these things when offered them, saying they only came for water… On Monday, some of the same ones repeated their visit to us, accepting only a drink of water, and stopping for a little chat. 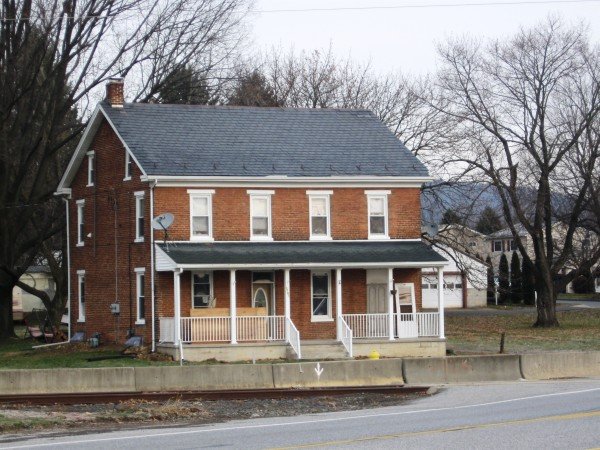 The writer journeyed to Wrightsville on Wednesday morning (July 1) and “it was difficult to realize I was going over the same ground that had so recently been trodden by an invading army. Not a fence or a barn was destroyed; not a sheaf of wheat trodden down. At Wrightsville the people told us it was entirely owing to the efforts of the Rebels that the whole place was not burned down; that they worked bravely the whole night to present this, assuring the people they had not come into this State either to burn or destroy private property; their mission was to meet the Federal army.” 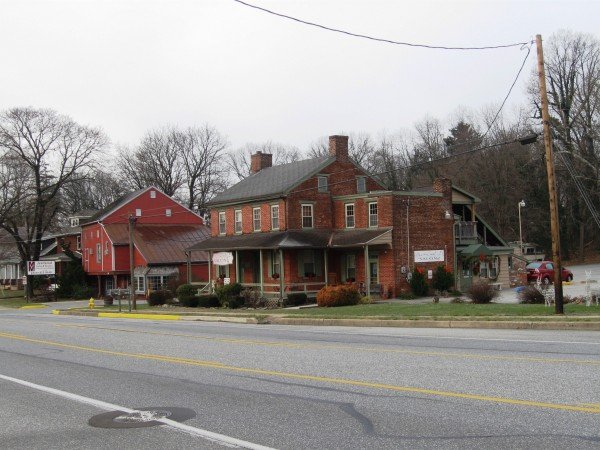 Confederate General Gordon, a prewar attorney and businessman, corroborated the woman’s claims in his post-war reminiscences:

“As I have intimated, the orders from General Lee for the protection of private property and persons were of the most stringent character. Guided by these instructions and by my own impulses, I resolved to leave no ruins along the line of my march through Pennsylvania; no marks of a more enduring character than the tracks of my soldiers along its superb pikes. I cannot be mistaken in the opinion that the citizens who then lived and still live on these highways will bear me out in the assertion that we marched into that delightful region, and then marched out of it, without leaving any scars to mar its beauty or lessen its value.” 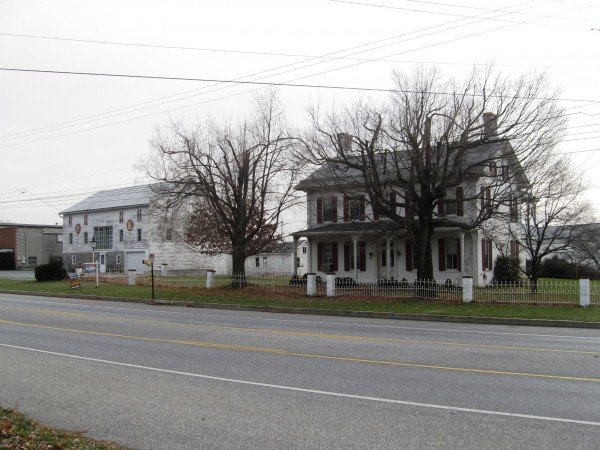 This was not the first time that military troops had passed through this region. In fact, the night before the Confederates marched eastward through here, a trainload of Union militia came through here after abandoning York and heading to the defenses being erected just west of Wrightsville. 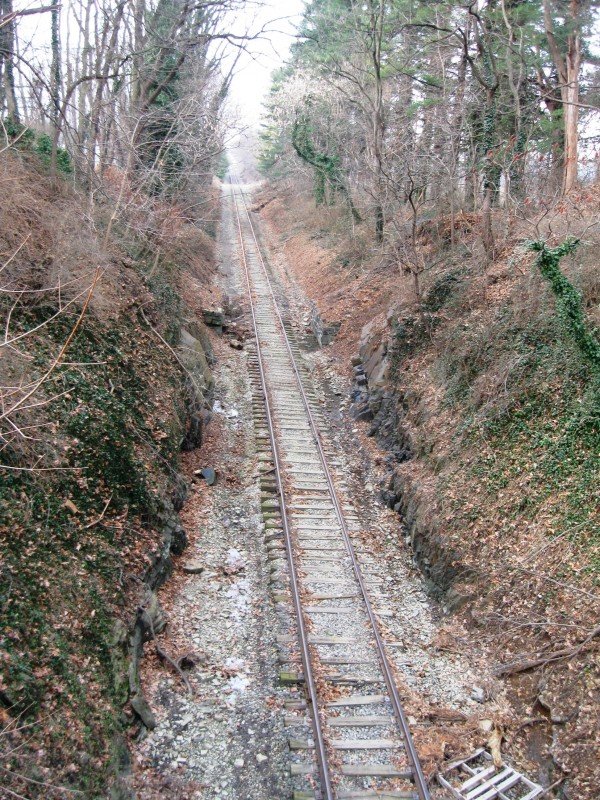 Major Granville O. Haller of the 7th U.S. Infantry had loaded soldiers from the 20th and 26th Pennsylvania Volunteer Infantry onto the train in York on Saturday afternoon. In a chaotic scene, the train took the soldiers and as many civilian refugees as it could hold eastward from York through this railroad cut toward today’s Stony Brook (the tracks at the top of the photo lead to York; the bottom leads to Wrightsville). 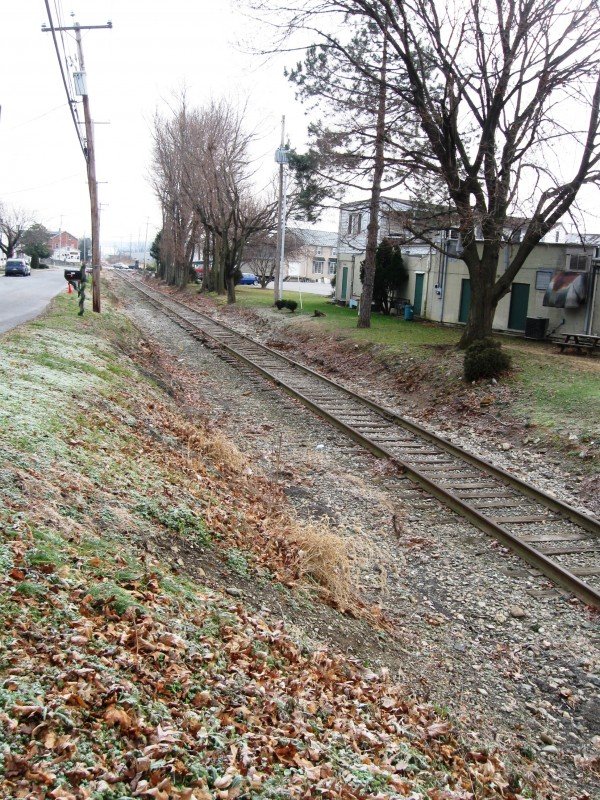 The train steamed across the turnpike (in the upper distance) and arrived in Wrightsville about 7:00 p.m. The state militiamen joined their compatriots in the 27th Militia in the entrenchments which nearly surrounded Wrightsville on three sides. Almost 24 hours later, they would be fighting the Confederates which marched through this area. 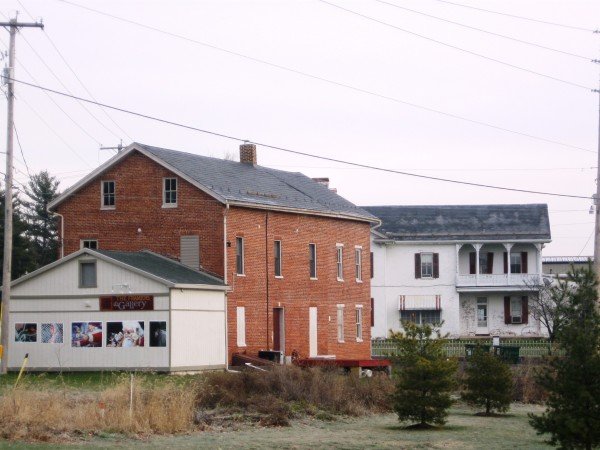 The old red brick warehouse dates from the 1870s and is from the brief period of postwar expansion when Stony Brook grew as a result of expanded railroad traffic. The white house beyond it may date from the Civil War.

For much more on the Confederate occupation of York County and the march to the river, pick up a copy of blogger Scott Mingus’s popular Flames Beyond Gettysburg: The Confederate Expedition to the Susquehanna River, June 1863. It is available at the York Emporium, Irvin’s Books, Bookland, and other York area bookstores, as well as Civil War and More up in Mechanicsburg. It can also be obtain from the publisher (Savas Beatie) or on amazon.com.