Stonewall Jackson and Winchester, Virginia is Topic at York CWRT on August 21 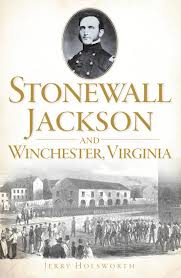 The York CWRT will feature author and historian Jerry W. Holsworth at its monthly meeting on Wednesday, August 21, 2013 at 7 p.m.  The meeting will be held at the Historical Society Museum, 250 E. Market St. in downtown York, Pennsylvania. The program is free and open to the public.
The presentation topic of the evening will be “Stonewall Jackson and Winchester, Virginia” which is the title of Jerry Holsworth’s second Civil War book on Winchester, Virginia.
The lecture will discuss the relationship between Stonewall Jackson and the town of Winchester, Virginia which began in June 1861 and lasted until his untimely death on May 10, 1863. Jackson’s values and beliefs reflected sentiments of the vast majority of the people of the Shenandoah Valley. This, coupled with his spectacular success on the battlefield, endeared Jackson to the people of Winchester, helping to form a remarkable bond between the general and the townspeople that is still remembered today. Local historian Jerry Holsworth chronicles the relationship between Jackson and the soldiers and townspeople of Winchester with information gathered from diaries, letters, journals and newspaper articles. Holsworth also recounts stories of the 1862 Shenandoah Valley Campaign, the battles that forever cemented Jackson’s place in history.
Jerry W. Holsworth is a retired public school teacher, and currently works at the Stewart Bell Jr. Archives, Handley Regional Library in Winchester, Virginia. He is also a docent at Washington’s Office Museum, and a sports writer for the Winchester Star. A former park ranger at Antietam National Battlefield, Jerry has written numerous articles for several Civil War publications on Hood’s Texas Brigade, and Winchester’s Civil War experience. Jerry is the author of two books on Winchester, “Civil War Winchester” and “Stonewall Jackson and Winchester, Virginia.” A native of Dallas, Texas and a graduate of the University of Dallas, Jerry has resided in Winchester, Virginia for 26 years.