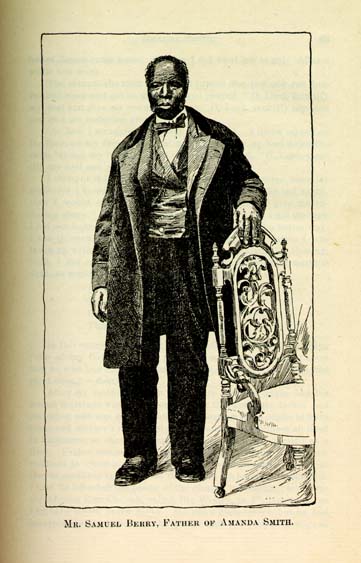 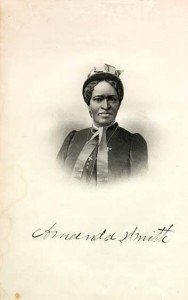 Amanda Berry Smith was perhaps the leading black female evangelist of the 19th century. Noted for her fiery passion for the Christian cause and for her compassion toward the downtrodden, Smith worked tirelessly as a missionary to India and Africa, as well as in poor sections of America and its cities. Much of her perseverance and drive can be traced to her father, Samuel Berry, who was active in the Underground Railroad in the Shrewsbury, Pennsylvania, area in southern York County.

Samuel Berry was born a slave in Maryland, but died as a free man. He saved up his money for years and over time purchased the freedom of his wife and children from their owners.

His story is not often told, but remained an enduring tale of courage and fortitude. 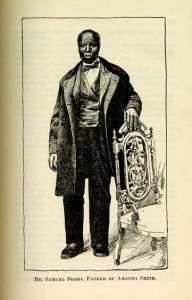 Samuel Berry grew up in rural northern Maryland. He was literate and enjoyed reading. His owner was a planter named Darby Insor, who had a reputation for treating his slaves fairly. Berry married Mariam Matthews, a slave girl on an adjacent farm owned by Shadrach Green.  Both Insor and Green were relatively small farmers compare to many of the nearby larger plantations.

After Darby Insor died, his son took charge of the farm and slaves. Samuel often traveled the twenty miles or so to Baltimore once or twice a week to sell produce or to buy supplies, and his trustworthy care of the money pleased Mrs. Insor. She gave Samuel a chance to buy his freedom. She began paying him for his work and allowed him to do side jobs for others for pay. In the evenings, after his regular work was done for the day, he would make brooms and husk mats  to sell in the Baltimore markets. He also walked three or four miles to other farms as a hired hand, again in the evenings often until one or two o’clock in the morning. After he purchased his own freedom from the Insors, he bought his wife and all five children.

Strong Methodists, the Berrys settled in the Shrewsbury area where Samuel rented land from a John Lowe, an anti-slavery man as were many of the residents of the region. Samuel’s daughter Amanda, at the age of 13, worked as domestic help for a nearby Mrs. Latimer. Sam worked for several of his neighbors, especially for Isaac Hendricks, who owned the Blueball Tavern, a popular watering hole along the Susquehanna Trail.

Berry became active in assisting runaway slaves, and John Lowe, the local judge, looked the other way (helping escaped slaves was a violation of the Federal Fugitive Slave Law and could lead to imprisonment).

Amanda later wrote about her father’s clandestine and dangerous activities: “Our house was one of the main stations of the Under Ground Railroad. My father took the “Baltimore Weekly Sun” newspaper; that always had advertisements of runaway slaves. After giving the cut of the poor fugitive, with a little bundle on his back, going with his face northward, the advertisement would read something like this: Three thousand dollars reward! Ran away from Anerandell County, Maryland, such a date, so many feet high, scar on the right side of the forehead or some other part of the body,—belonging to Mr. A. or B. So sometimes the excitement was so high we

had to be very discreet in order not to attract suspicion. My father was watched closely.

I have known him to lead in the harvest field from fifteen to twenty men—he was a great cradler and mower in those days —and after working all day in the harvest field, he would come home at night, sleep about two hours, then start at midnight and walk fifteen or twenty miles and carry a poor slave to a place of security; sometimes a mother and child, sometimes a man and wife, other times a man or more, then get home just before day. Perhaps he could sleep an hour then go to work, and so many times baffled suspicion. Never but once was there a poor slave taken that my father ever got his hand on, and if that man had told the truth he would have been saved, but he was afraid.

There was a beautiful woods a mile from New Market on the Baltimore and York Turnpike; it was called Lowe’s Camp Ground. It was about three quarters of a mile from our house. My mother was a splendid cook, so we arranged to keep a boarding house during the camp meeting time. We had melons, and pies and cakes and such like, as well. Father was very busy and had not noticed the papers for a week or two, so did not know there was any advertisement of runaways. There were living in New Market certain white men that made their living by catching runaway slaves and getting the reward. A man named Turner, who kept the post office at New Market, Ben Crout, who kept a regular Southern blood-hound for that purpose, and John Hunt. These men all lived in New Market. Then there was a Luther Amos, Jake Hedrick, Abe Samson and Luther Samson, his son. I knew them all well. Samson had a number of grey-hounds. So these fellows used to watch our house closely, trying every way to catch my father.”

In one case, the men from New Market beat Samuel for harboring and feeding an escaped slave, who they seized and dragged down to Baltimore to be reclaimed by his master. Amanda tells of several other exciting near misses, but the Berrys usually were able to get the runaways to the next station on the Underground Railroad.

By 1855, Samuel Berry lived in Wrightsville and continued in his assistance of runaway slaves. It is likely, though speculative, that he helped York businessman William Goodridge transport slaves across the Columbia Bridge into Lancaster County.

During the Civil War, three of Berry’s sons fought in the Union Army. One of them contracted smallpox and died in a Harrisburg hospital.

Berry moved to Philadelphia, where Amanda recounted, “Father was old-fashioned, and did not like some of the new methods in church, such as fairs and festivals and the like; so that in speaking against these things, and not in the mildest spirit, I fear, he offended the pastor of the church he belonged to; it was the African Zion Church, called Big Wesley, in Philadelphia, on Lombard street, below Sixth. He was a class leader, but he had incurred the displeasure of the pastor and the people mostly; so things got to be very unpleasant, and his spirit got sour and he left the church.”

Samuel was a construction worker helping erect the tall buildings in the expanding business section of Philadelphia. However, his health gave out.

Amanda, who by then lived in New York City, recalled his last days, ” I had been home to Philadelphia on it visit, and I had father come around one night to tea before I left; he seemed so changed and different from what he had been; he had been sick for several days, but not in bed. I was not there when he died. The morning he died; he got up as usual, was very weak, but dressed himself, put on all his Sunday clothes, went out and took a walk, came back and read his Bible, and then said to my sister, ‘I feel so weak, I think I will go upstairs and lie down.’ And they went up a little while after, and she saw he was dying; not a struggle or a groan.”

Samuel Berry’s story is just one of the unsung heroes of York County’s role in the Underground Railroad movement.