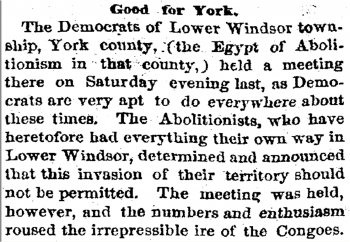 In September 1863, the York Gazette reported on a political event in southeastern York County, Pa., in which “Abolition rowdies” attempted to disrupt a meeting of Democrats in Lower Windsor Township. The township had for the past few years been heavily Republican and strong supporters of abolitionism. The firebrands of the party “announced that this invasion of their territory should not be permitted.” Two leading Democratic attorneys from downtown York, James B. Zeigler and John W. Bittenger, were the featured speakers at the conclave.

To keep the Democrats from gaining traction in their region, the Republicans planned a civil demonstration, which got ugly when a visiting delegation of Democrats from neighboring Lancaster County noisily arrived “with flags and music.” While Zeigler was attempting to speak, the Republicans “attempted to march through the audience with drums and shouts, but were resisted and repelled.”

They obviously were not repelled for long, for the Republicans came back in force to disrupt the second speaker.

According to the pro-Democrat Gazette reporter, “During Mr. Bittenger’s speech they resorted to various methods of annoyance, and at last assailed several Democrats with clubs.”

The battle was soon joined.

Fed up with the antics of their political opponents, the Democrats “now turned upon the ruffians, and cleared them out of the street in quadrepel quick.” Unfortunately, “somebody got hurt.” 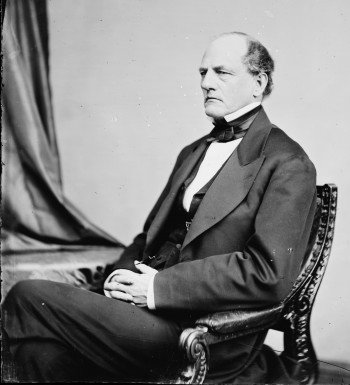 After quiet was restored, the Democrats adjourned their meeting with cheers for their gubernatorial candidate (Judge G. W. Woodward), the Union and the Constitution.

According to the newsman, “It was one of the largest and most enthusiastic gatherings of the Democracy ever held in the county, and will have the effect of delivering Lower Windsor from Abolition rule…. Democrats, keep the ball rolling, and we will forever destroy Abolitionism in York county. The work goes bravely on!”

The anti-Abolition work clearly did not not achieve the party’s goals.

The Republicans got the last laugh, the one that counted — a decisive victory at the ballot box.