Politics has often been a bitter affair, dividing communities, families, churches, and businesses. So divisive, in fact, that in most American towns throughout the 19th and 20th centuries separate newspapers emerged to reflect the political and social views of owner-editors. York, Pennsylvania, was typical, with newspapers over the years that catered to Democrats, Republicans, and, earlier, Whigs, among other parties.

Sometimes these differences were relatively peaceful and the papers co-existed, vying for readership, community influence, commercial printing needs, and advertising dollars but tolerating or ignoring their competition. At other times, the editors engaged in wars of words, sometimes bordering on (or crossing into) slander or libel. In a few communities, duels and other mayhem resulted from these vicious attacks.

In November 1892, one of York’s newspaper editors, a Civil War combat veteran who was an independent politically, angrily responded to inferences on his politics by slamming both the local Democratic and Republican papers. One of his particular targets was Arthur Briggs Farquhar, the businessman who had played such a key role in the controversial June 1863 surrender of York to Confederate Major General Jubal Early during the Gettysburg Campaign. Farquhar, on his own initiative, rode westward and met with Brigadier General John B. Gordon, negotiating the terms by which the Rebels would enter and occupy York. He then returned to Gordon with a bipartisan committee to finalize the agreement. Some in York never forgave Farquhar (or Democratic Chief Burgess David Small, either).

Among them was Edward W. Spangler, who as a lad had enlisted in the 130th Pennsylvania during the Civil War. As an adult decades later, he edited the York Daily. And, he launched into his rivals with both barrels blazing in the November 7, 1892, edition, opening some old wounds in York’s often bitter politics. 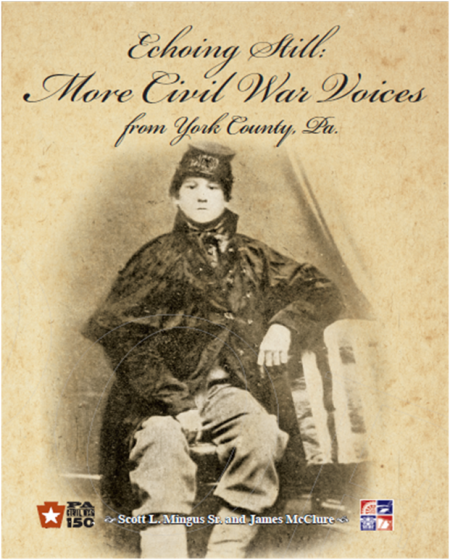 Edward W. Spangler enlisted as a baby-faced teenager in Company K, 130th Pennsylvania Infantry and fought at the battle of Antietam. His compelling image graces the cover of Jim McClure’s and my popular book, Echoing Still: More Civil War Voices from York County, Pa. [available at the book shop of the York County History Center, several area bookstores, or the lobby of the York Daily Record].

Thirty years after “seeing the elephant” at Antietam, Spangler attacked A. B. Farquhar and another rival editor in a blistering editorial in the York Daily newspaper in response to previous comments about his politics. Here is that column, beginning with an earlier quote from his competitor to which he took exception. It originated with charges of patronage over the printing of York’s election ballots and ended with re-igniting the long-simmering controversy about York’s surrender.

“‘The York Daily to-day is a full-fledged Democratic sheet. Under the guise of advertising matter it gives the Democratic cause a boost. This is no doubt part pay for printing the official ballots at a larger figure than any other office in York asked for the work. Here is a pointer for the Republicans of York County. If you want Republican information you must get it from the regular Republican paper, the the York Dispatch, the only out and out Republican organ in the county.’ – Saturday Evening’s Dispatch

“Articles of a similar character have repeatedly appeared in the Dispatch, as well as in the Gazette [the borough’s leading Democratic paper] — with this difference, that the latter invariably tells its few readers that it is a ‘Republican DAILY.’

Now that his readers knew why he was upset, E. W. Spangler launched his counterattack, emphasizing that his paper enjoyed the largest circulation in town.

“We have never condescended to these divergent characterizations by these rampant political organs. The numerous readers of THE DAILY know what it is; but for the proprietors of the above organs, who read only their own effusions and then smile at their own smartness, we vouchsafe the glorious fact that THE DAILY is politically independent; it publishes the political news of both sides free, and charges advertising rates for only purely partisan political matter. Both political parties use its columns whenever they want to reach the people. They would rather pay THE DAILY for political matter and reach the people than have it printed free in the Dispatch and Gazette and not reach them.”

He refuted the charges of patronage in printing the ballots, claiming that his competitors’ “second-class wornout, rattletrap presses would have been entirely inadequate to print the ballots within the time required by law.”

Then, Spangler got personal. Very personal. After defending his independent beliefs and claiming that he “would rather be a patriot than a partisan,” he launched into a dual-pronged diatribe against his competitors. And, their actions during the Civil War thirty years ago were at the very heart of his anger.

“Nor is the senior editor ashamed of his political record, and he is willing to compare it with that of both Hiram Young, proprietor of the Dispatch, and A. B. Farquhar, owner of the Gazette. When Hiram Young was making money hand-over-fist by charging Republicans two dollars and fifty cents a year for the True Democrat, and finally bamboozled the stockholders out of the whole [printing] plant, and then displayed his patriotism during the rebel invasion by being the first one to desert his post, fleeing from even his own wife and children, and skedaddled with railroad velocity across the Susquehanna and without a halt before he got to the environs of Philadelphia — while most of these things were going on and his patriotism was getting to the exploding point aforesaid, the senior editor [Spangler] at the age of 16 was carrying a rifle in the Army of the Potomac.”

Spangler then turned his sights squarely on the venerated Farquhar, long a community and business leader. He charged him with corruption in dealing with government contracts and exploiting the shipment of dead soldiers for personal profit. He also charged him with flip-flopping from the Republicans to the Democrats, and hinted at traitorous collusion with the Rebels.

“While A. B. Farquhar in 1862 was making hemlock coffins for the Government and charging them high tariff prices (for he was then a blatant and bellowing high-tariff Republican — for their was money in it for him, and he had no Democratic Congressional aspirations); when he was dealing in human flesh (an American Tippoo Tip), and selling hundreds of unsophisticated and unsuspecting substitutes [Farquhar helped arrange for men drafted into the army to hire replacements for $300 to serve in their stead], and morally robbing them of a large portion of that bounty to which they are legally and morally entitled for imperilling their lives to save their country; and when he in hot haste  and of his own volition rode pell-mell into General Gordon’s camp near Abbottstown, ostensibly for the purpose of surrendering the borough of York, so that his made and unmade coffins (his contribution to the war) should not be burned up, but really for the purpose of making himself thick with the rebel General; when a few days later he hobnobbed in the upper end of the county with the enemy to such an extent that [Union cavalry] General Kilpatrick believed him to be a spy, and it is said made threats to shoot him; when he did this presumptively in anticipation of an expected rebel victory by General Lee, when his duplicity might make him a satrap in Pennsylvania under the Jeff. Davis government; when this recent renegade (and would have then but for Gettysburg), was then boiling over with his love for his dear country, the senior editor [Spangler] was fighting in the bloody battles of Antietam, Fredericksburg, and Chancellorsville.

“From such sham patriots, hypocrites, and vampires, the good Lord deliver us…”