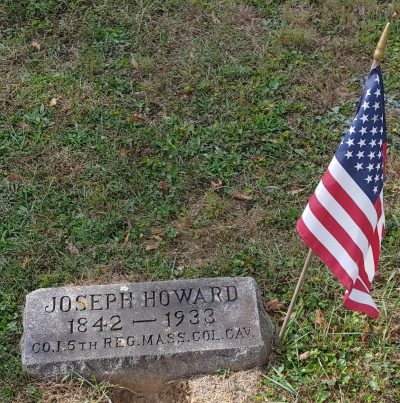 In recent years, a dedicated group of volunteers has been restoring and cleaning the historic Lebanon Cemetery off of North George Street in North York, Pennsylvania. This black cemetery is private property but I received permission to take photographs of the headstones of some of the Civil War veterans interred there. The volunteers are not only maintaining the grounds; they are also researching the lives of the men, women, and children who are buried there.

Here is one of the three dozen or so veterans of the Union army who fought for the North during the American Civil War.

In December 1863, Massachusetts Governor John A. Andrew issued General Order No. 44, authorizing the formation of “a Regiment of Cavalry Volunteers, to be composed of men of color…is now in the process of recruitment in the Commonwealth.”

The unit was to be designated as the 5th Massachusetts Colored Cavalry. Recruiting for the new regiment continued throughout the winter into early spring throughout Massachusetts and neighboring areas. Joseph J. Howard decided to enlist in March 1864. At the time, he lived in the 6th Ward of Boston and worked as a waiter. The 20-year-old enrolled as a private in Company I. He stood 5-feet, 5 1/2-inches tall. 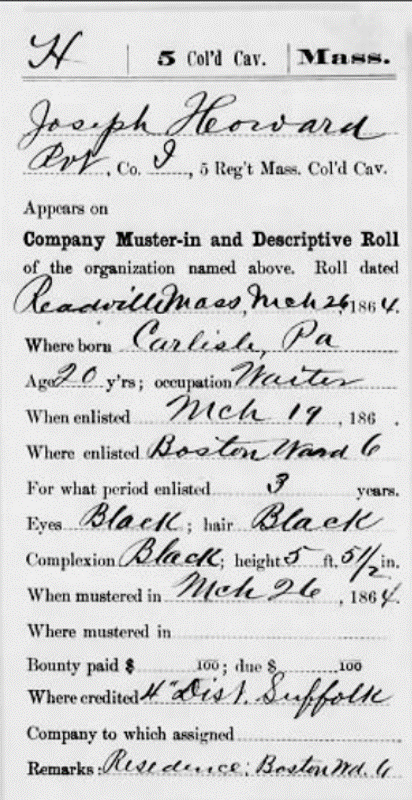 The new regiment trained at Camp Meigs near Readville, Massachusetts, between January 9 and May 5. On May 1, just before the regiment broke camp and headed by train to Washington, D.C., Private Joseph Howard, by Special Orders #118, became Sergeant Joseph Howard.

On May 12, the decision was made to demount the unit to serve as infantry (a common practice during the war when foot soldiers, white or black, were of greater need). Joseph Howard became ill soon after the regiment moved to the South. He was confined to Balfour General Hospital st Fort Monroe in Portsmouth, Virginia.

Meanwhile, the soldiers of the 5th Massachusetts CC became part of the Army of the James under Maj. Gen. William J. “Baldy” Smith (the same general who in July 1863 had resisted Jeb Stuart at Joseph Howard’s native Carlisle, PA). They served in Brig. Gen. Edward A. Wild’s brigade of Brig. Gen. Edward W. Hinks’ all-black division of the Eighteenth Army Corps. Serving under white officers, the 5th was brigaded with the 1st United States Colored Cavalry (also dismounted) and the 1st and 10th U. S. Colored Troops. The 5th Massachusetts first saw action at Baylor’s Farm during the Second Battle of Petersburg in June. Howard was not present; he was still on special duty. The regiment then was taken to Point Lookout, Maryland, to guard Confederate prisoners at the infamous camp.

Recovering well enough to rejoin the regiment on August 19, 1864, initially doing special duty at Piney Point. According to Howard’s service records, in January and February 1865, he received a $180 bounty for volunteering again, to be paid in four installments. The regiment, back in Virginia in March, marched in triumph into Richmond after Robert E. Lee retreated. On June 16, the 5th Massachusetts Colored Cavalry was shipped to Texas to perform guard duty.

Joseph Howard and his comrades mustered out of the regiment at Clarksville, Texas, on October 31, 1865. They returned to Massachusetts and then headed to their individual homes. Howard married twice. By 1900, he had moved to York where he was an active member of the Small Post 369 of the Grand Army of the Republic, a leading fraternal organization for Union veterans of the Civil War.

When he died on February 10, 1933, from arteriosclerosis, he was reportedly the last black Civil War veteran living in York borough (a handful of black soldiers were still alive in other communities within York County.