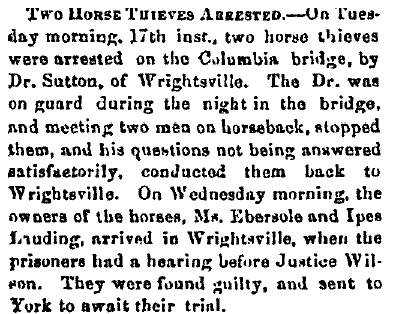 Most of the newspaper articles in the Mid-Atlantic region from mid to late September 1862 focused heavily on the Battle of Antietam/Sharpsburg down in Maryland. York Countians fought there in the 130th Pennsylvania Infantry.

Back on the home front, the news included the above piece from the Columbia Spy, September 20, 1862. Two guys suspiciously were crossing the bridge in the night, a strange event considering the bridge was covered and would have been very dark at the time. The bridge guard arrested them and hauled them back to Wrightsville to await trial.

Less than a year later, hundreds of York Countians took their horses across the same bridge to avoid losing them to a more serious, and more professional, group of what the locals would call horse thieves — the 35th Battalion, Virginia Cavalry, Southern soldiers who were appropriating every healthy horse they could find in Adams and York counties during the invasion of Pennsylvania. Led by Lt. Col. Elijah V. White, the cavalrymen are known to have taken more than 100 horses during their 3-day stay in York County. Add in the horses taken by the 17th Virginia and Jubal Early’s two cavalry units combined for more than 300 horses.

Unlike the two common thieves in September 1862, White’s soldiers at least generally offered to pay for their gained mounts, albeit in worthless Confederate money.