Recently, several people who could not attend my frequent talks on the Underground Railroad and the Civil War have asked if these talks are recorded on DVD or available on YouTube.

The answer is, yes, several presentations are indeed available. The quality, topic, and length vary depending upon the A/V equipment in use at the time but the following list should be representative of talks based on my books. Please click on the blue text link / title to begin the video.

The Civil War in York County, PA: Discusses the role of York County in the Civil War, complete with vintage photographs. Topics include early war recruiting, the US Army Hospital in York, Lincoln and politics in York County, the multiple Confederate invasions in 1863, the role of local railroads and industry, the fighting at Hanover and Hanover Junction, the surrender of York, and the defense of the world’s longest covered bridge.

Confederate Calamity: Jeb Stuart’s Cavalry Ride Through York County, PA: On June 30, 1863, Stuart’s cavalry fought at Hanover, PA, and then for the next two days rode through York County PA in an attempt to locate the Army of Northern Virginia. His cavalry missed the first two days of the battle of Gettysburg, depriving Robert E. Lee of his “eyes and ears of the army.”

The Cumberland Valley Railroad in the Civil War: The CVRR was a persistent target of the Confederates throughout the war, beginning with JEB Stuart’s raid on Chambersburg in October 1862 through the Gettysburg Campaign the following year, culminating in the burning of Chambersburg in 1864. It was also one of the first railroads used in the US to transport an army to a theater of war when Robert Patterson’s men moved to the Shenandoah Valley in May 1861 before the First Battle of Bull Run. Here’s another version of this talk.

Flames Beyond Gettysburg: The Confederate Expedition to the Susquehanna River, June 1863: Maj. Gen. Jubal A. Early seized control of Gettysburg after a series of skirmishes on June 26 and then two days later occupied York, the largest Northern town to fall to the Confederates during the entire war. General Early ransomed York for money and supplies and surrounded the town with artillery and troops. Hastily organized state militia defended the river crossing at Wrightsville and then burned the world’s longest covered bridge to prevent Rebel passage into Lancaster County, from which Jubal Early had hoped to threaten Harrisburg. Here’s another version of this talk.

Save the Mifflin House / Hybla (with Don Bair)

A History of Early Papermaking in the Ohio Valley

NOTE: Jim McClure and I have a new book on Civil War Stories from York County that is now available on Amazon. Our first book signing will be on December 5 at Civil War and More in Mechanicsburg PA. 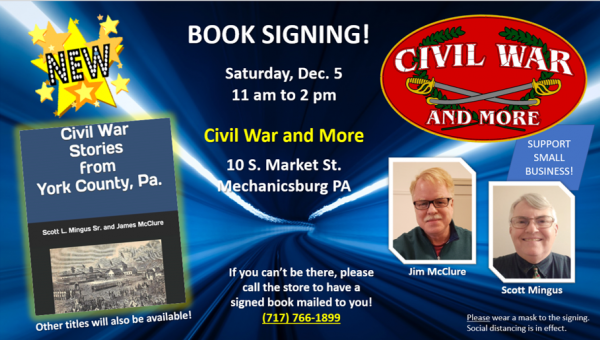