This sketch from the New York Illustrated News shows Camp Scott, a Civil War training facility in York, Pennsylvania. In May 1861, a soldier of the 2nd Pennsylvania Infantry using the pen name “Bageney” sent several letters  home to the editor of the Gettysburg Compiler, Heny J. Stahle. These were initially reproduced in the June 28, 1963, edition of the Gettysburg Times. For part 1 of this story, click here.

“Bageney” was a member of the Independent Blues, a company raised and organized in Adams County, Pa. He had been in the service only a few days when he wrote the first of his witty and at times sarcastic letters to Stahle from Camp Scott. While he praised the citizens of the South Newberry Street area of York, he ridiculed the government for spending way too much money for poorly fitting uniforms and shoes for the new soldiers.

This time, he was less caustic and more descriptive of everyday camp life, including the first known death of a soldier at Camp Scott. 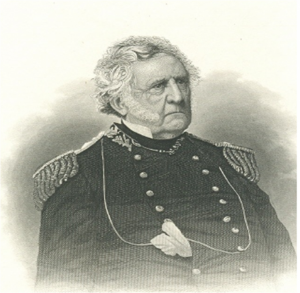 Camp Scott was named in honor of Winfield Scott, a popular Mexican War hero who at the start of the Civil War commanded all of the U. S. Army. His age and corpulence would soon render him unfit for the role and he would retire. Bageney had been quartered at Camp Scott prior to his regiment being moved temporarily to private housing in southwestern York because of flooding. (Photo from the National Archives.)

“Camp Scott, York, Pa., May 11 — It was currently reported that we would leave today. I supposed it would have taken place, if it had not been for the bad weather, in consequence of which the bridges on the Northern Central road could not be completed. [Editor’s note: Confederate raiders had burned several railroad bridges in northern Maryland shortly after the start of the conflict.] It is supposed we will be moved in brigade, constituted by the 1st, 2d, 3d, 13th and 16th Regiments, in command of Gen. [William H.] Keim.

The idea seems to be to concentrate troops from different quarters and arrest the city of Baltimore from the hands of the roughs, and make it again a loyal city; which I hope may be done in order to save the innocent from destruction. Our Regiment today stood a medical examination. The surgeons visiting our Company passed without an examination, but with the remark that we looked as though we could do our nations duty.”

[Editor’s note: Many of the 6,000-7,000 men assembled in Camp Scott would be sent south in Maryland and the Shenandoah Valley to guard railroads, key roads, and supply depots. The men had signed up for a term of thirty days, which is all the overly optimistic Federal government felt it needed to crush the rebellion. Little did anyone know how long the conflict really would last and how many of the men who drilled at Camp Scott would not survive the war. Two men of Bageney’s own Company E would eventually perish from their exposure to the watery, cold elements while at Camp Scott. Leander Welsh died in the Eagle Hotel in Gettysburg on June 20 and Van Buren Tawney at Chambersburg on June 25.]

“Sunday, 12th — This day has been the most severe one we have had. All the Regiments in Camp Scott were mustered for a review by his Excellency the Governor. [Note: Bageney was writing to a staunchly Democratic newspaper; Governor Curtin was a Republican; hence the sarcasm]. We had to stand from 1 1/2 o’clock until about 4 1/2. As our Company had no arms, we were never under rest. I think he might have taken some another day. Persons who witnessed the sight of these six Regiments on review, from an elevated position, say it was grand.” 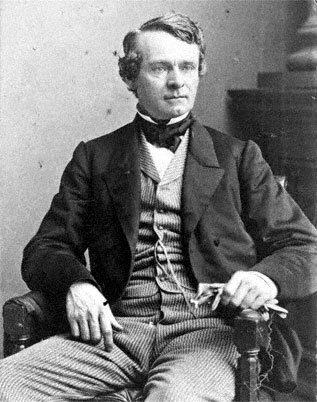 “Thursday, 16th — Still at Camp Scott, awaiting orders to move. I have an idea of what it is like to be deprived of one’s liberty. Interesting to see what plans soldiers will devise to humbug the guard — even to the taking of a child from the arms of its mother, and carrying it out of Camp. Permit me to say a few words in regards to the way Col. S. [Frederick S. Stumbaugh, of Chambersburg], of our Regiment, takes in order to intimidate and drive men into volunteering during the war. He says he will have every man’s name placed on the records of the State, so it will stand as a disgrace against them. I consider that our Regiment entered into a contract with the Government to serve it for three months. We are willing to do so. If he thinks he will frighten Pennsylvania he mistakes his men.

One of the Johnstown soldiers was shot last night. I have just learned that he is dead. The particulars I have not been able to ascertain.”

With that note, “Bageney” laid down his pen until the following Sunday morning. We will pick up his stories in the next entry in the Cannonball blog.