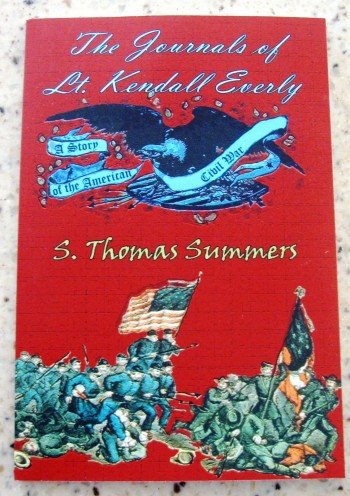 S. Thomas Summers is a teacher of Writing and Literature at Wayne Hills High School in Wayne, NJ and an adjunct writing professor at Passaic County Community College in Wanaque, NJ.

Mr. Summers is an accomplished and well regarded poet whose first book of Civil War poetry, Private Hercules McGraw, was reviewed on this Cannonball blog back in August 2012. Now, a year later, Summers has issued his second volume in this series, this time introducing character in a work entitled The Journals of Lt. Kendall Everly: A Story of the American Civil War.

At the start of the work, Everly is a school teacher who holds rather strong pacifist views. Many of his starry-eyed students enroll in the army; their innocence to be shattered on the battlefield.

Everly all too well realizes this, and eventually enlists in an effort to help protect his former students. They together face the realities of military life and the horrors of combat, changing them forever. As the author puts it, “the war and its horrors envelope him, transform him into a man he no longer knows or recognizes.”

At 78 pages, this book is on the surface an easy read. However, the depth of the poetry and its evocative word pictures will cause you to linger over each poem, fulling appreciating the meaning and import as the story builds. Everly is subtly changed, and the poetry wonderfully captures the mood swings as the young school teacher becomes a battle-hardened Union officer.

This new book is well worth a read if you are interested not only in poetry, but explorations of the human soul and psyche. S. Thomas Summers has again proven himself as a master of the word picture.

From the back cover, “S. Thomas Summers has written another poignant, inspiring collection of poems that well portrays the angst, camaraderie, fear, and other human emotions that all Civil War soldiers experienced.” — Scott L. Mingus, Sr. author of Flames Beyond Gettysburg.

For more on the author and his works, visit S. Thomas Summers’ website.