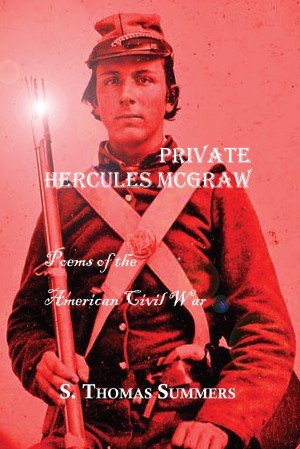 S. Thomas Summers is a poet and writer who maintains a literary blog, Lint in My Pocket: Writing with Some Ink and a Hammer. The New Jersey high school teacher doubles as an adjunct professor in writing at a community college.

The book traces in vivid and often gritty poetry the story of a fictional Confederate private, Hercules McGraw, who enlists at the start of the war with two friends. Among his motivations is his love for Martha Lane, a Southern belle. He believes that he needs to acquire a slave and better his economic status to have a chance with Miss Lane.

Summers skillfully weaves the McGraw story with a backdrop of issues of slavery, militarism, human emotions, and the horrors of warfare. McGraw moves over time from a starry-eyed volunteer soldier who struggles with his emotions after shooting his first Yankee to a grizzled and realistic veteran who no longer wants anything to do with acquiring a slave or courting Miss Martha. He instead becomes a man of peace and compassion, and loses his racist attitudes toward the black race.

Along the way, he watches the deaths of his two pals, fights at Shiloh and Gettysburg, and endures the life of a Confederate soldier fighting for a lost cause. All the while, he grows as a man as his attitudes and his war experiences reshape and remold him.