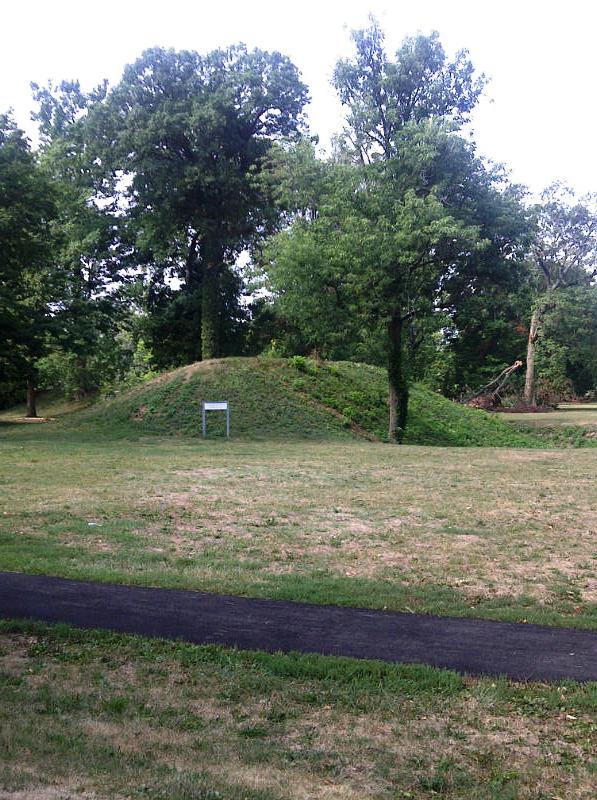 When I was a kid growing up in Muskingum County, Ohio, my parents would occasionally take road trips over to neighboring Licking County to shop at the Welles and Arrow department stores (pre Wal-Mart days!). I used to like to look at the old prehistoric Indian mounds and earthworks in Newark and Heath. This past weekend, I was in Ohio to speak in Newark at the public library on my book Flames Beyond Gettysburg. I had a little time before lunch, so I once again stopped by the Newark Earthworks, one of three surviving portions of what was one the largest and most elaborate earthen enclosures on the planet.

Like many other mounds in Ohio (and as far west as Illinois) this site served as a community and spiritual center. Research back in 1982 by some college professors demonstrated that a significant section of the Newark works are perfectly aligned with the moon’s movements in terms of moonrises over an 18.5-year cycle.

Here are a few more photos: 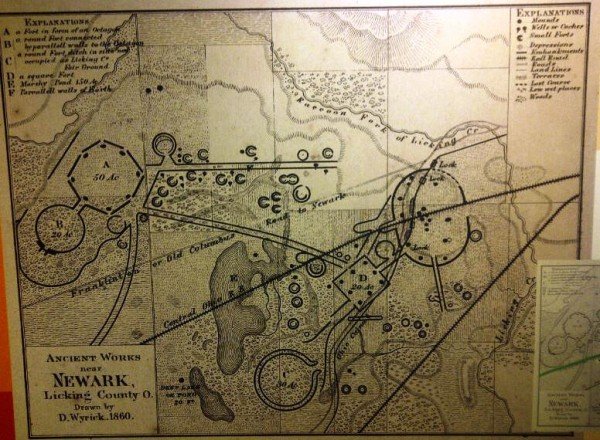 Much of the original earthworks are now gone, thanks to 19th century construction of canals, railroads, roads, and farms. The above map shows the incredibly detailed and complex arrangement of the old earthworks, quite a feat considering some parts may be as much as 2,000 years old! These old moundbuilders obviously liked to observe and chart the skies. 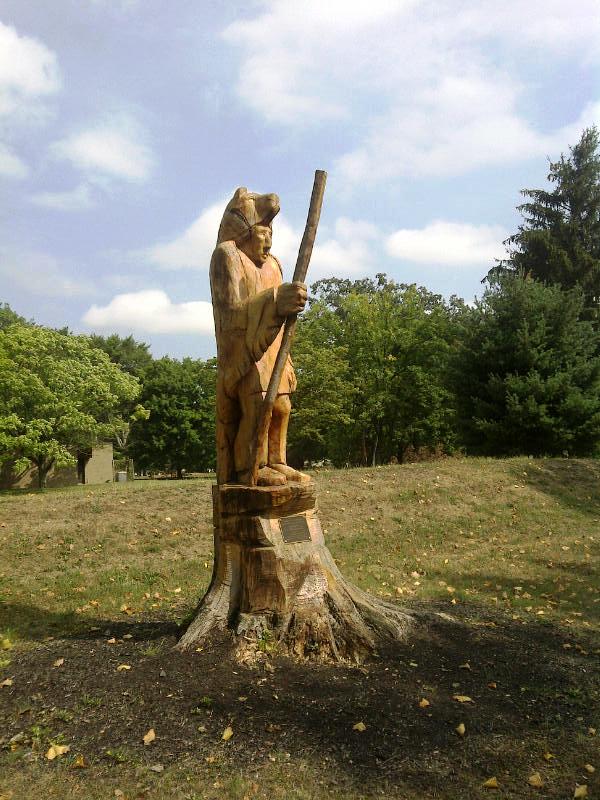 A recent wood carving calls to mind an effigy found at the site years ago which shows a man wearing a bearskin. 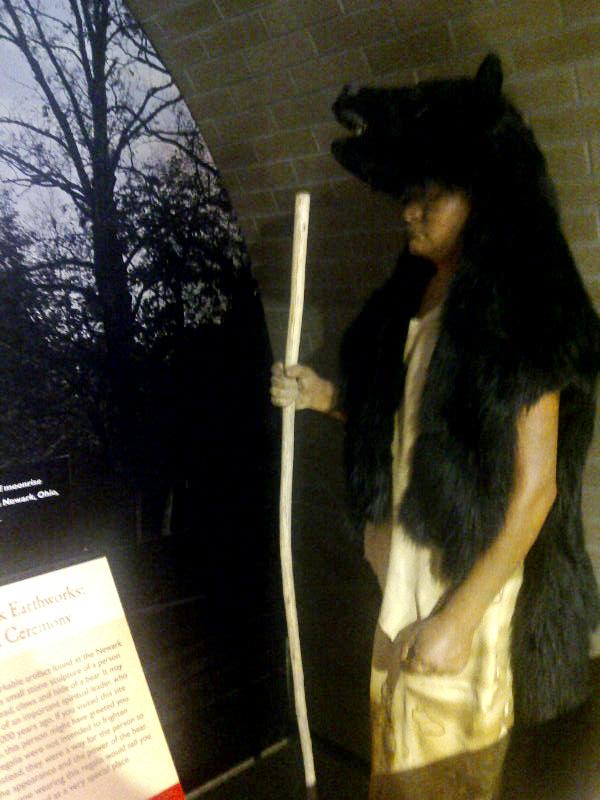 Inside the site’s museum is this interpretation of the moundbuilder’s spiritual leader. 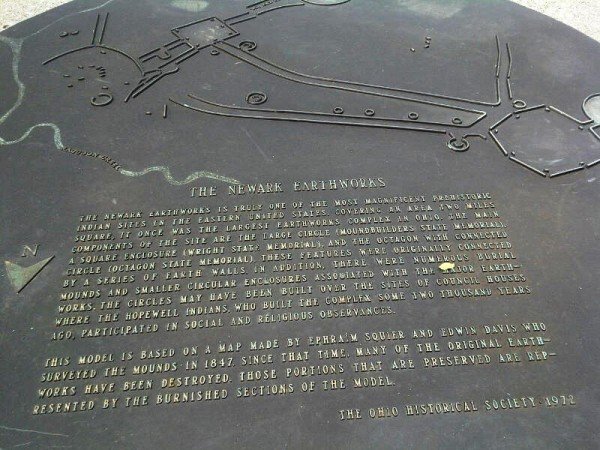 From the Wikipedia article on the Newark Earthworks:

The Newark Earthworks in Newark and Heath, Ohio, consists of three sections of preserved earthworks: the Great Circle Earthworks, the Octagon Earthworks, and the Wright Earthworks. This complex contained the largest earthen enclosures in the world, being about 3,000 acres in extent. Today, the site itself covers 206 acres. The site is preserved as a state park by the Ohio Historical Society. It has been designated a National Historic Landmark. In 2006, Newark Earthworks was also designated as the “official prehistoric monument of the State of Ohio…”

“Built by the Hopewell culture between 250 CE and AD 500, the earthworks were used as places of ceremony, social gathering, trade, and worship. The Newark Earthwork site is the largest surviving Hopewell earthwork complex. The culture built many earthen mounds. Over many years, they built the single largest earthwork enclosure complex in the Ohio River Valley. The earthworks cover several square miles. Scholars have demonstrated that the Octagon Earthworks comprise a lunar observatory for tracking the moon’s orbit during its 18.6-year cycle.” 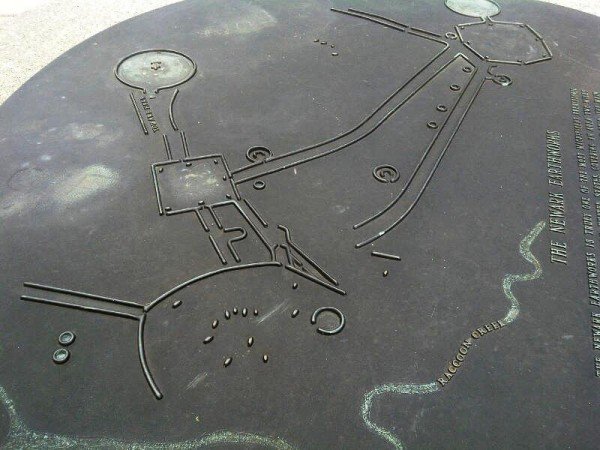 “The 1,054-foot (321 m) wide Newark Great Circle is the largest circular earthwork in the Americas, at least in construction effort. The 8 feet (2.4 m) high walls surround a 5 feet (1.5 m) deep moat, except at the entrance where the dimensions are even greater and more impressive.” 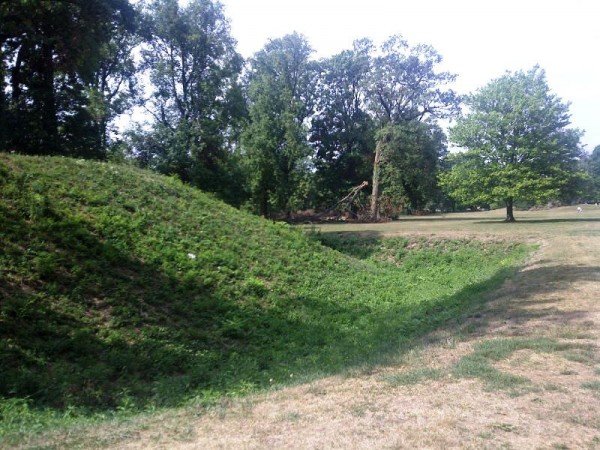 One side of the entrance to the Great Circle… recently Newark suffered a major derecho event (strong linear windstorm) which took out dozens of trees or portions of trees and caused widespread power outages. 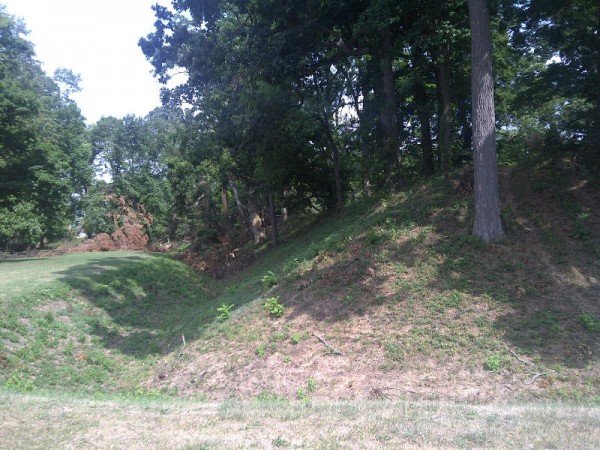 Note all the fallen trees in the ditch… some parts of Licking County were out of power for more than a week in the days after the 4th of July. 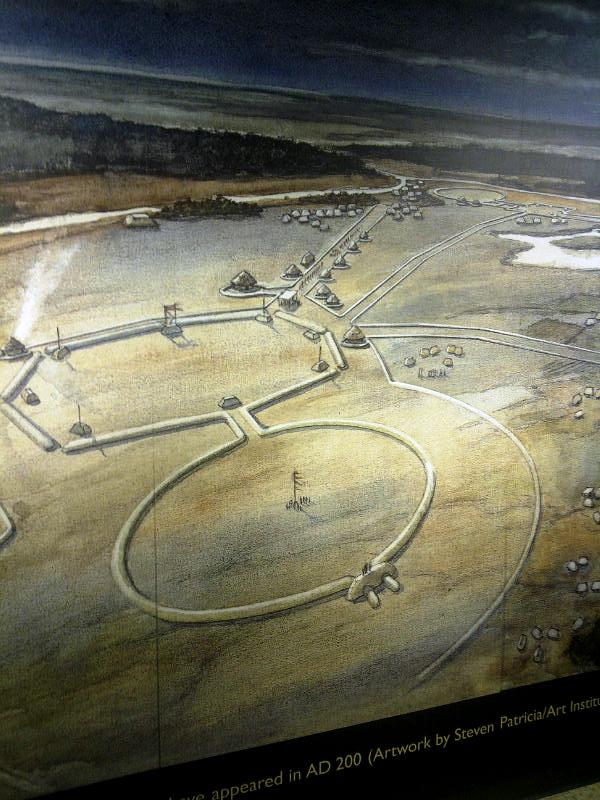 The previous photo was taken at the right (in the sketch above) entrance to the circle earthworks. 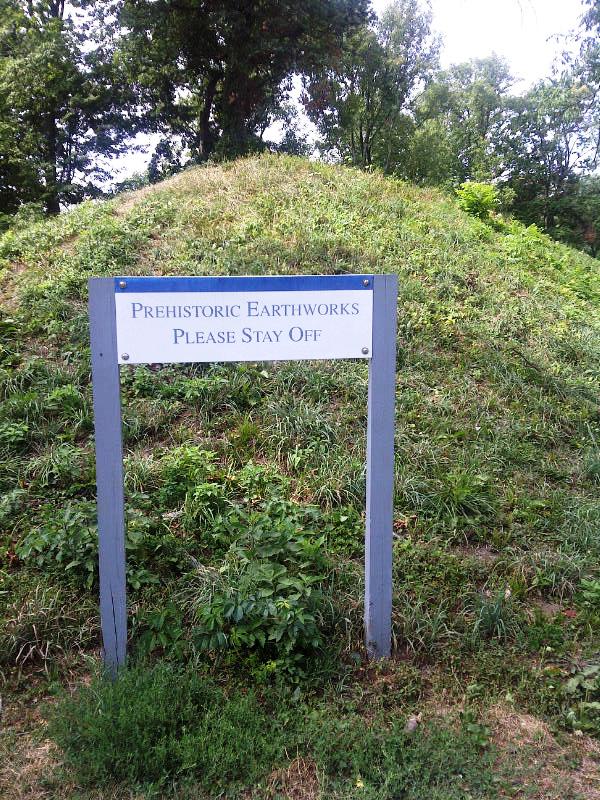 Many of the Newark Earthworks are 10 – 15 feet high, despite a thousand-plus years of erosion. 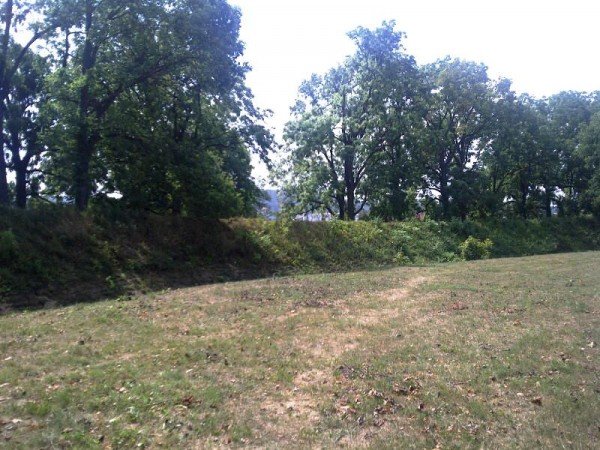 If you go: The Newark Earthworks are near the adjoining cities of Heath and Newark, Ohio, just a short drive north of Interstate 70 in east-central Ohio. To learn more, visit the webpage of the Ohio Historical Society, which administers the site.

Learn more about the Newark Earthworks by visiting the Great Circle Museum. Visitors are invited to watch an interactive video explaining the significance of the site and tour a 1,000-square-foot exhibit that includes a timeline of Ohio’s ancient cultures and an explanation of why American Indians regard the Newark Earthworks as a sacred site. The exhibit also details how the earthworks align with the rising and setting of the moon.

Following the museum tour, visitors can take self-guided tours of the grounds during daylight hours. The Great Circle Earthworks are part of the Newark Earthworks consisting of the nearby Octagon Earthworks and Wright Earthworks. The Great Circle Museum is also the new home of the Licking County Convention and Visitors Bureau (LCCVB). The LCCVB offers travel-related products and services to assist visitors in Licking County. For more information, call 800.589.8224 or visit www.lccvb.com