The Civil War, some like to say, began in Virginia farmer Wilmer McLean’s back yard and ended in his parlor.  McLean owned a house near Manassas on what became the Bull Run battlefield. The war, of course, was already in progress by that time but when the armies fought on and around his farm, McLean suffered losses to his fencing and other property damage. The Manassas area saw considerable other troops movements, as well as a second, even larger battle in the late summer of 1862. McLean eventually moved his family well to the south in an area thought to be safe from the war, Appomattox County.

Little could he dream that on April 9, 1865, Robert E. Lee and Ulysses S. Grant would sit in his parlor to discuss the surrender of the Army of Northern Virginia. Nor could he have imagined that soldiers would cart off some of his personal possessions, including his daughter’s hand-made rag doll.

Almost 151 years later, I would stand in McLean’s reconstructed parlor during my first visit to Appomattox Courthouse, now a National Park Service property.

Here are some photographs from my April 7, 2016, visit to the park.

But, first, a very brief side trip was in order to see the grave of someone of personal interest to me – Lee’s “Bad Old Man,” Gen. Jubal A. Early.

Jubal Early was not at Appomattox Courthouse, nor did he surrender with the remnants of Lee’s army. Earlier in 1865, he commanded troops in the Shenandoah Valley before being dismissed. Back in the summer of 1863, he had led a division of Lee’s army into Franklin, Adams, and York counties in south-central Pennsylvania during the Gettysburg Campaign. I have written four books which in whole or part cover Early’s division during that time frame.

Back to Appomattox… One of Early’s chief subordinates during that June 1863 incursion into the Keystone State was John Brown Gordon, a general from Georgia who at Appomattox now commanded a corps in the Confederate army. Gordon would be one of the commissioners who actually negotiated the final surrender and oversaw the process. 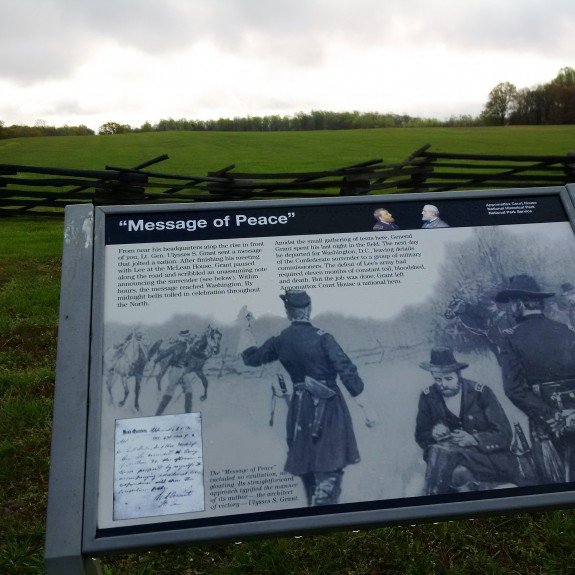 As one approaches the modern battlefield park from the south, one of the first of several wayside markers that line the public highway depicts General Grant drafting a message to be sent to his longtime Southern adversary, Robert E. Lee. 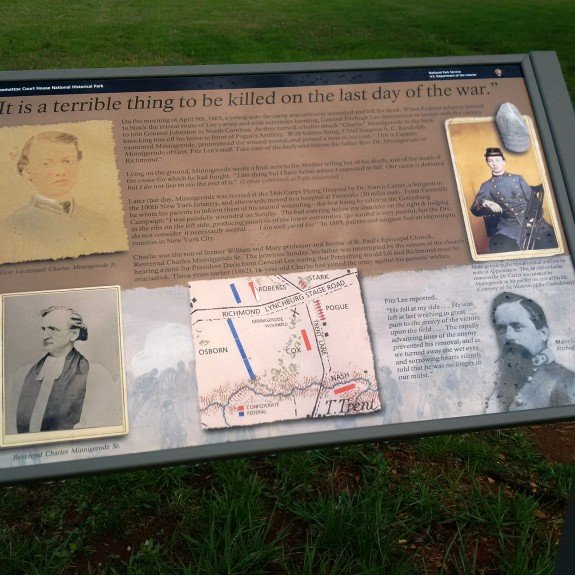 Union forces had blocked Lee’s escape route to North Carolina after he evacuated Petersburg and Richmond. Cavalry under George Armstrong Custer, as well as powerful infantry columns, stood in the way. Lee launched a few desperate attacks, but it was soon evident his men could not readily cut their way through. Some units and hundreds of individuals did slip away, but the bulk of Lee’s army was now cut off. Several unfortunate soldiers died in these final pushes on what turned out to be the last day of hostilities for the once powerful Army of Northern Virginia. 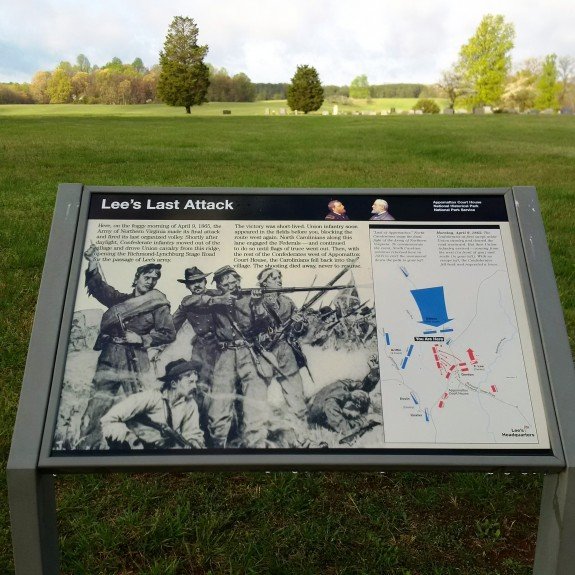 Wayside marker for Lee’s final attack. Many of his men were determined to keep trying to break through the Yankee lines, but Lee knew the bloodshed on both sides would be useless and would only prolong the inevitable. 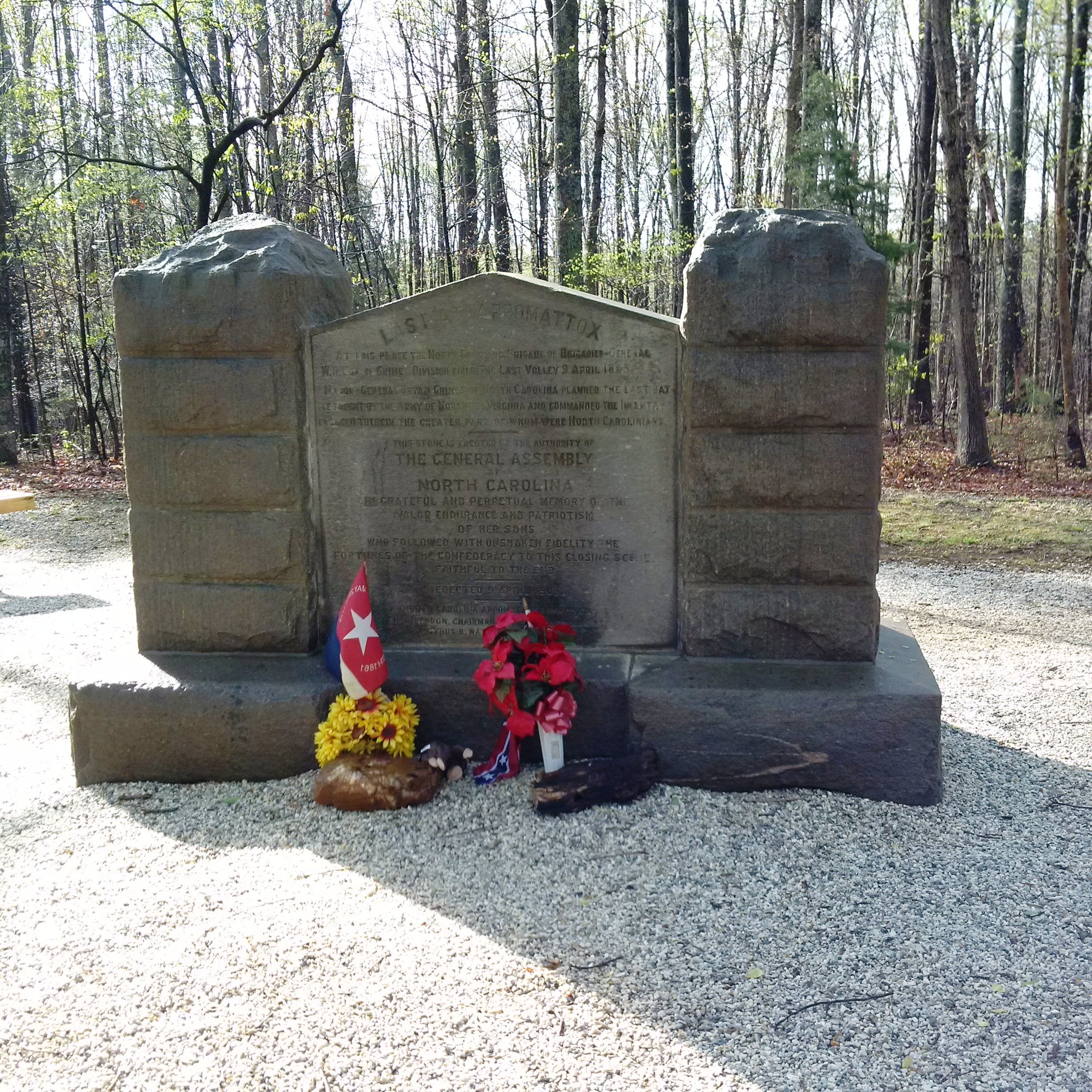 This monument marks  the spot where North Carolina troops, badly depleted in number but still full of fight, fired the last formal volley of the war by the Army of Northern Virginia. 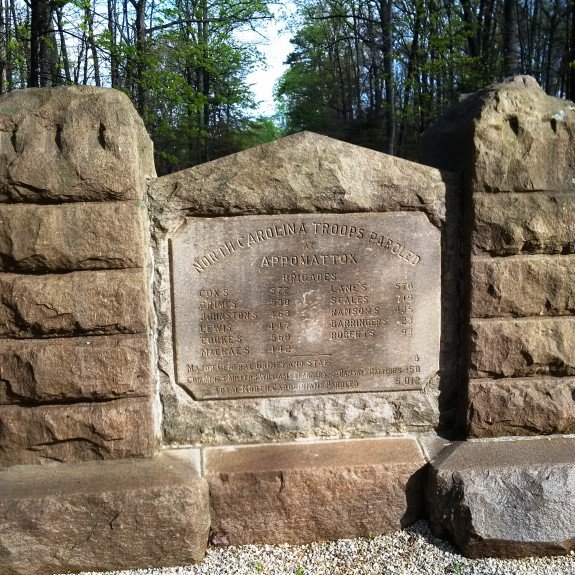 The reverse side of the North Carolina monument at Appomattox Courthouse. 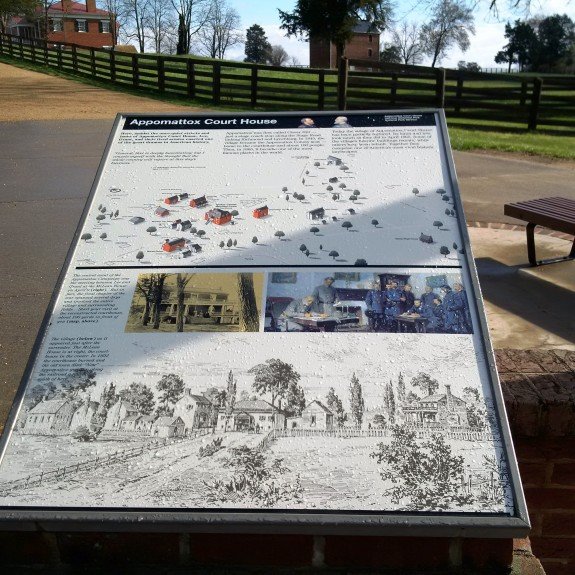 For Lee, there was only one thing left to do — meet with General Grant to discuss the terms by which he could surrender his beloved army. 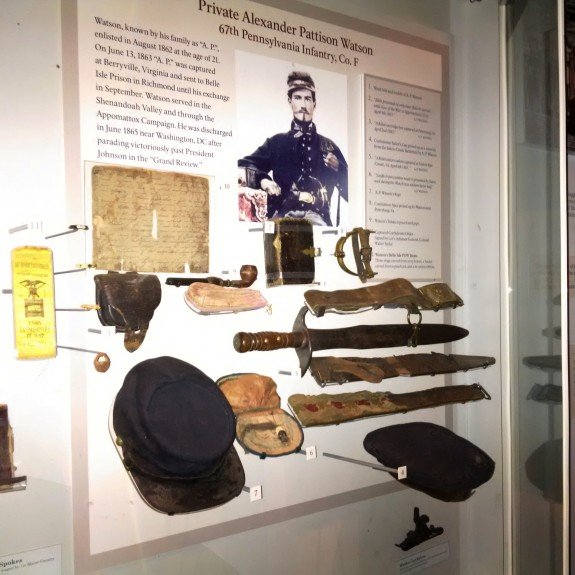 The hamlet of Appomattox Courthouse was the county seat. Inside the restored courthouse building is a small, but very nice museum with artifacts from the final battle as well as from the soldiers who survived to come home. This display shows some of the souvenirs, including a Rebel hat, that Pvt. Alexander Watson of the 67th Pennsylvania brought home from the war. 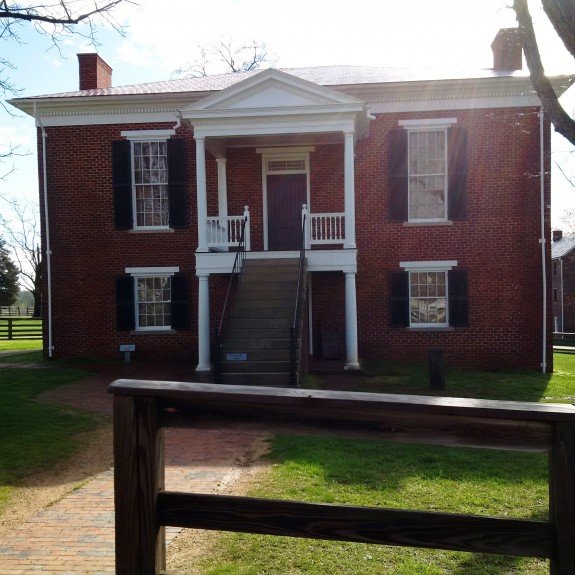 The original courthouse burned in 1892. A new one was built a couple miles away and the old hamlet eventually was all but abandoned. In the mid-20th century, efforts began to restore it. Today, several buildings have been rebuilt or restored, and the tourist can get a small sense of what the village looked like when Lee met Grant in the McLean parlor.