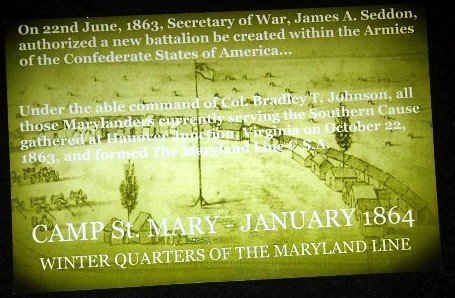 During the Civil War, residents of the state of Maryland was decidedly split in their loyalties. The Eastern Shore and the Baltimore vicinity were largely pro-Confederate while the western part of the state, where there was far less slavery, was mostly pro-Union. The state provided large numbers of troops to both armies, and during the battle of Gettysburg in early July 1863 Marylanders fought directly against Marylanders.

Among the Confederate military units was the so-called Maryland Line, named in honor of a predecessor unit dating from the American Revolution and War of 1812. The 1st Maryland Infantry (later re-designated as the 2nd Maryland) was the largest command. As part of the Army of Northern Virginia, they spent the winter of 1863-1864 at Camp St. Mary, believed to have been near the North Anna River in Virginia. An old sketch (reproduced as a postcard show above) depicts the camp.

During a recent speaking engagement near Havre de Grace, I met a Confederate reenactor who has a strong interest in the Maryland Line. He has been researching the location of their January 1864 camp and provided me the postcard.

If any readers have any information on this camp, or any letters or journal entries written from Camp St. Mary, please let him know at TheMarylandLine@gmail.com. He is also selling copies of the historic engraving of Camp St. Mary. 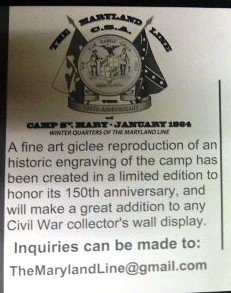