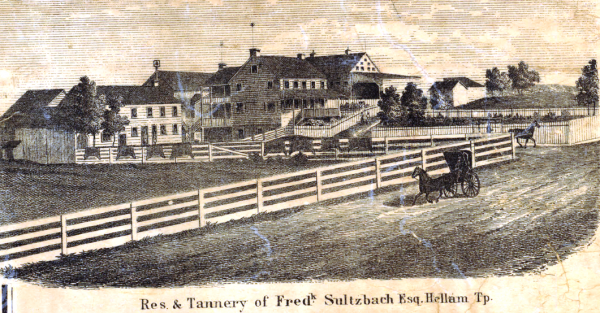 The long column must have been quite a sight as it stretched out along the Gettysburg-York-Wrightsville-Lancaster turnpike, with the men, horses, and mules all caked from head to foot in thick layers of limestone dust and road grime. Several rode horses procured in recent days from Pennsylvania farmers. Some had bleeding feet because the weeks of marching on hard macadamized roads in Virginia, Maryland, and southern Pennsylvania had eroded the soles of their brogans to the point where their exposed feet suffered the consequences of sharp limestone pebbles.

Perhaps Waldo’s forward cavalry patrol, well out in advance of the main column, paused to raid the tannery; perhaps General Gordon placed a guard over it. No record exists that the Sultzbach family ever filed a postwar damage claim to recover any money for their loss; perhaps they indeed were robbed blind but cared not for the hassle of filing the necessary paperwork. 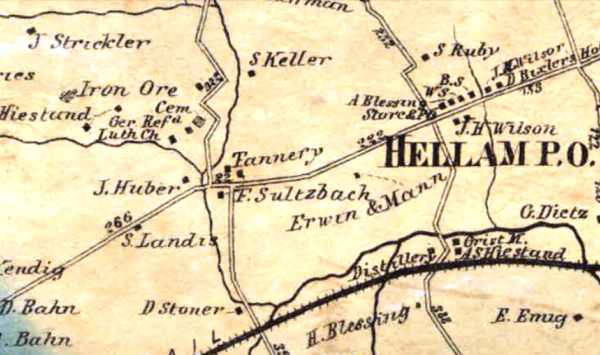 The Sultzbach Tannery was located west of the village of Hallam at what was then a T-shaped intersection of the turnpike (today’s State Route 462/Lincoln Highway) and Freysville Road (to the south). Just to the immediate west was what is now called Old Church Road.

Frederick Sultzbach was born in 1817 to a large Swiss-American family with deep roots in Hellam Township. His father Heinrich “Henry” Sultzbach (1774-1853) was a prominent farmer and businessman; his mother Elizabeth Bauer (1769-1849) was also from a significant Hellam Township clan. Henry established the tannery in 181o; upon his death his sons John and Henry initially operated it before selling it to Frederick in the 1850s.

Sultzbach married Lydia Gibson and the union produced 8 children (Elizabeth, Milton, twins Angeline and Emaline, Ellen, Alice, Alfred, and Annie). The family was active in the local German Reformed Church, which in combination with the nearby Lutheran congregation, had dedicated a new, joint purpose brick building on October 21, 1860 (subsequent to the above map published earlier in the year which still showed two distinct and separate buildings for the congregations). The Civil War-era church is now known as Kreutz Creek Church.

Frederick Sultzbach was one of the best known businessmen and Masons of Hellam Township. In the 1850 U.S. Census, he was listed as a “tanner and currier,” with assets worth $12,000 (a significant sum for those days, but interestingly it did not place him in the top 25 wealthiest men in Hellam Township). In 1859 he became the first Republican elected to the Pennsylvania State Legislature; he served a single term until 1861 alongside Democrat John Manifold as York County’s two representatives to the General Assembly.

During the Civil War, his oldest son Milton was the quartermaster of the 166th Pennsylvania, a nine-months regiment of draftees which served from November 1862 until July 28, 1863.

It is unknown if any other members of the Sultzbach family were present to watch the Rebels tramp pass their home on Sunday, June 28 or upon their westbound return trip on June 29, but it is likely. In most cases, the women and children stayed home while the husband and oldest boys took the horses into hiding.

What is known is that Frederick Sultzbach at the time that John Gordon rode past his house had a little more than two months to live. He died on August 17, 1863, and was buried in the local church cemetery. His widow Lydia and their son Milton continued operating the tannery for many years.

The site of the wartime Sultzbach tannery is now encompassed by the intersection of Route 462 and the post-war Kreutz Creek Road. The site of the home is now a Rutter’s gas station.

Sources: The image of the tannery is an illustration from Shearer & Lake’s 1860 Map of York County (Pennsylvania State Archives). Information on Frederick Sultzbach is taken from various genealogical websites, including ancestry.com and the Hart Family Files, as well as Prowell’s History of York County (Prowell incorrectly spells his surname as Sultzbaugh). Confederate material is adapted from Flames Beyond Gettysburg: The Confederate Expedition to the Susquehanna River, June 1863 by Scott L. Mingus, Sr. The church dedication info is from the York Gazette, October 23, 1860.