The Northern Central Railway suffered significant damage during the June 1863 Confederate raid into York County, Pennsylvania. The NCRW ran from Baltimore northward to York and Harrisburg, with connecting lines stretching well into upstate New York. Typical cargoes included coal, grain, milk, military supplies (which made up 1/6 of the total revenues), lumber, and passengers. At Hanover Junction in south-central York County, the NCRW intersected with the westbound Hanover Branch Railroad, which ran through Hanover to Gettysburg. A spur in York ran eastward to Wrightsville on the Susquehanna River.

During the Gettysburg Campaign, Virginia cavalrymen burned at least 31 bridges on the Northern Central throughout York County, as well as dozens of railcars (many of which had been abandoned and left behind when the NCRW pulled most of its rolling stock across the Susquehanna River at Wrightsville or Bridgeport (now Lemoyne).

Among the NCRW’s stated losses is an ironclad rail car, perhaps similar to the one shown in the 1863 Russell photograph.

The Northern Central’s annual report for 1863 lists Ironclad Car #319, lost to rebel action near York, Pa., on or about June 26th, 1863. That day the Rebels were in Gettysburg and burned several cars belonging to the Pennsylvania Railroad (troop and supply cars from the 27th Pennsylvania Volunteer Militia), as well as a handful from the NCRW. The net value was $5,600.

On June 28-29, Confederates destroyed rolling stock at the York rail yard, presumably including Ironclad Car #319, which the NCRW estimated as being worth $800. The railroad estimated it loss for the other cars at a staggering $12,000, with an additional $1,800 for the weigh scale and fixtures (such as switches, culverts, etc.).

A more significant sum was the loss of trade, which the NCRW accountant estimated at $109,000 based upon typical revenues. Adding in the cost of repairs (labor and raw materials) as well as to construct blockhouses along the line, the NCRW pegged its total loss from the Confederate invasion at $234,900. 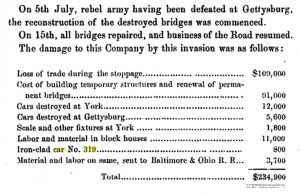 The NCRW’s brief entry above includes Iron-clad car No. 319 in its list of damages. No other contemporary account has been found of the destruction of the armored car. 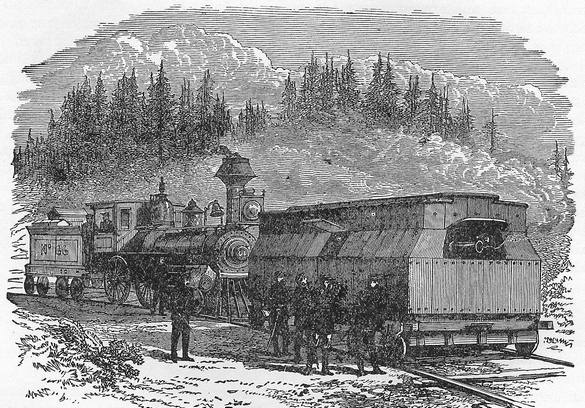 This 1864 etching shows a different style of armored car versus A. J. Russell’s 1863 photo. This particular car operated on the Baltimore & Ohio Railroad at Folck’s Mill near Cumberland, Maryland. The exact style of the NCRW’s destroyed railcar #319 is unknown.

It is also unclear when the NCRW acquired the ironclad (or if it was even their property, although the $800 loss is debited by the accountant. It does not show up in lists of NCRW property). Confederate raiders destroyed several bridges in northern Maryland on April 20, 1861, shortly after the bombardment of Fort Sumter. This caused a 28-day delay in resuming service between York and Baltimore, and the NCRW then estimated its loss as $119,609.63. Rebels even seized the railroad’s offices at Calvert Street Station in Baltimore and forced the railroad to move its operational headquarters to Harrisburg.

Perhaps the $800 ironclad was a small investment later in 1861 or early in 1862 to protect the railroad from further such damages?

Researcher and long-time railfan Ivan Frantz, Jr. of the Sons of Union Veterans offers this additional commentary on the difficulty of learning more about the NCRW’s rolling stock during the war years: “Tracing Civil War era equipment records of the PRR and its controlled and subsidiary lines at that time is very difficult. Many of the consolidated records of PRR subsidiary lines from the Civil War period were stored in Broad Street station in Philadelphia beginning in the early 1900s, and because they were not in common usage by that time they were stored under the tracks in the train shed area of the station. Corporate records were stored up in the offices of the main building, but what would have been ‘obsolete equipment’ by 1900 were stored under the tracks. In 1923 there was a very large fire in the train shed of Broad Street station and many of the old records stored under the tracks were lost either due to fire or water damage. Most of the records lost concerned ‘obsolete equipment’ and/or old employee records. Remember, by 1923 you are already 60 years removed from the Civil War, and those records were not in common use for regular business operation of the railroad by that time.”

If anyone has any further information about Ironclad Car No. 319, please let me know!