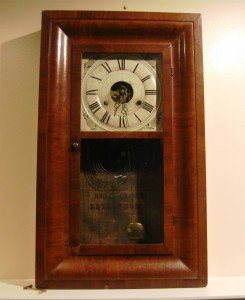 The summer of 1863 witnessed two major Confederate raids into the North, the largest being Robert E. Lee’s invasion of Pennsylvania. The clock shown above graced the Mingus household in southeastern Ohio in July when John Hunt Morgan’s cavalry rode through the region in a desperate attempt to escape from pursuing Yankees.

Lee’s Army of Northern Virginia was under strict orders to prevent looting and damage to private property when in the Keystone State. While in the majority of cases the officers kept tight rein on their men, the biggest problem for the residents came from deserters, stragglers, and “bummers” who would slip away from their regiments and go off on their own.

Such a party of ne’er-do-wells visited the isolated farmhouse of Jacob and Catherine Smeich near Hanover Junction, Pennsylvania, in rural North Codorus Township. These raiders were infantrymen from one of Jubal Early’s regiments which had occupied York borough from June 28-30.

Here is the account of the subsequent vandalism and thievery, taken from George Prowell’s History of York County and from Jacob Smeich’s post-war damage claim he filed with the state.

Jacob Smeich was born on the 4th of July in 1811. As a young man, he married Catherine Sechrist, who was a year older than Jacob and took up farming, his father’s occupation. They raised a family of several children, including Jacob, Jr. They attended Shaffer’s Zion Lutheran Church in Codorus Township. 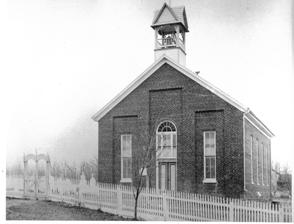 During the Confederate occupation of York, the Smeich family fled their home and took their livestock and horses to safety. They locked their house against intruders and likely either headed across the Susquehanna River to Columbia or headed through Cross Keys to southeastern York County (two places frequently by the refugees that late June of 1863).

Upon their return, they discovered to their shock that the Rebels had broken into their house and vandalized it. Windows were broken, Catherine’s prized looking glass was in pieces on the floor, and other possessions were strewn about the damaged house.

A lot of personal property was missing, never to be seen again and likely taken back to the South by the thieves.

Jacob Smeich testified after the war in his damage claim deposition that the Rebels had broken windows with their guns to enter his locked house. Among the list of stolen property were his accordion, two of Catherine’s bonnets and her woolen shawl, four coverlets, two of Jacob’s cotton shirts, and a silk handkerchief. The Confederates had ransacked the house “in a violent manner,” destroyed furniture and smashed glassware and pottery.

They stole 150 bushels oats, 150 bushels corn, 50 2-bushel grain bags, horse gears, and fly nets from his barn and took them to their nearby camp.

Rebels even forced Levi Hale to thresh the oats and shell the corn!

Smeich never received a dime in compensation for his damage claim.

He did recover financially and even bought another farm in 1869 which had been foreclosed for tax reasons (he was involved in a lawsuit over that property when the original owner disputed the forfeiture).