The Civil War saw the first mass use of railroads in America to move troops, supplies, horses, and equipment to places of need. The Northern states had about 21,000 miles of track (and 45,000 miles of telegraph wires). Pennsylvania boasted the most railroad tracks on the continent, with 2,600 miles completed and in use by 1860.

Three railroads ran through York County (and, no, the Maryland and Pennsylvania, or Ma and Pa, was not yet in existence). The mainline was the Northern Central Railway, which stretched north from Baltimore to Williamsport. Key stops in YorkCo included New Freedom, Railroad/Shrewsbury Station, Glen Rock, Hanover Junction (where the NCR connected with the Hanover Branch Railroad that ran west to Gettysburg), York (another spur in York ran eastward to Wrightsville where it connected to Columbia and Philadelphia), Emigsville, Manchester, Mount Wolf, and York Haven, among others.

In 1863, the NCR leased the connecting line that ran on up to Elmira, New York, paving the way for the construction of the infamous Union prisoner-of-war camp nicknamed “Hellmira.” The NCR enjoyed lucrative contracts with the army and the U.S. government, and trainloads of soldiers were a frequent sight to York Countians. Wounded men were brought to the 1,600-bed Army General Hospital on what is now Penn Park in York (the army expanded the hospital to 2,000 beds before the end of the war). York factories churned out tents, blankets, whips, wagons, and other materials of use to the military. Farmers sent thousands of pounds of food supplies via rail to army depots.

Stories abound of how the railroad influenced York County during (and after) the Civil War.

Here’s an example, adapted from my book Soldiers, Spies, & Steam: A History of the Northern Central Railway in the Civil War.

After the destruction of the B&O RR’s bridge at Harper’s Ferry, all mail bound for Baltimore from anywhere in the Midwest was diverted to Harrisburg and then sent south through York on the NCR.

More than 14,000 wounded or sick soldiers were brought by train to York’s Army Hospital from the summer of 1862 through the end of the war. Some of them stayed in YorkCo after the war and married local ladies.

Abraham Lincoln used the NCR and the connecting Hanover Brand Railroad to travel to Gettysburg on November 18, 1863, to deliver the Gettysburg Address the following day. He returned after dark on the 19th. His funeral train traveled from Baltimore to Harrisburg through York County on April 21, 1865. Large crowds gathered trackside to pay their respects to the slain president.

Coal was a critical part of the freight hauls on the NCR. In 1863, the railroad carried 107,000 tons for military purposes. By 1864, that volume had increased to more than 300,000. Pennsylvania coal powered the U.S. Navy’s gunboats and ocean-going vessels. Anthracite was preferred over bituminous because it produced less black smoke when burned, making it harder to spot naval ships and boats.

Telegraphers in southern York County’s Hanover Junction tapped out the first news of the battle of Gettysburg southward toward the US Department of War’s offices in Washington.

For more information on the Northern Central Railway during the Civil War, please pick up a copy of Soldiers, Spies, & Steam. 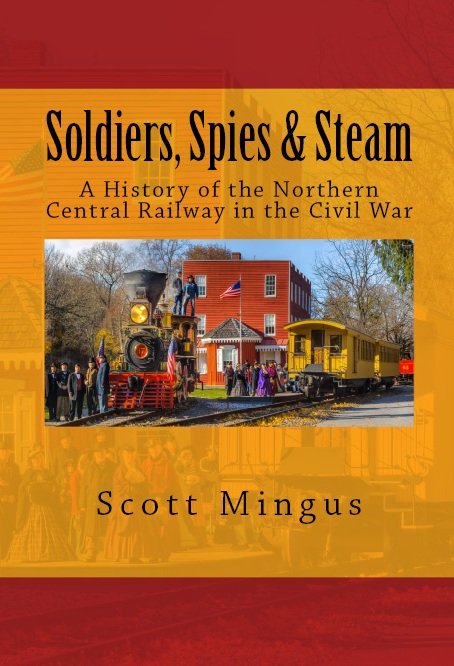