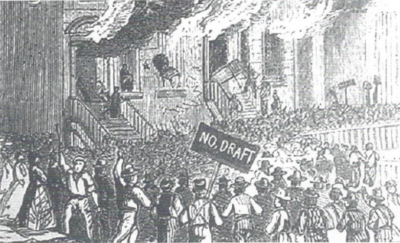 In the summer of 1863, following the U.S. government’s announcement of a military draft to raise manpower to bolster the war-ravaged Union forces, anti-draft riots, some quite violent, erupted in several Northern communities. The most famous, and deadliest, of these riots was in New York City. The Federal troops that came to the city to quell the disturbances included soldiers who had fought at Gettysburg earlier in July.

While many residents of York County, Pennsylvania, obeyed the summons when they were drafted (or hired substitutes or paid a commutation fee), some men stubbornly refused to report for duty as ordered. A few hid in the woods or in ore banks or quarries. Others stayed home and dared the authorities to come and get them.

The York Gazette of September 29, 1863, reported the story of one malcontent in rural Manheim Township whose plan backfired. Citizens in that township in the southwestern part of the county had only given Abraham Lincoln two votes in the 1860 presidential election while casting 174 ballots for his Democratic opponent. Lincoln and his war efforts were decidedly unpopular in much of the region.

“SHOOTING AFFAIR – On Monday morning, at quite an early hour, says the Hanover Spectator, Provost Marshal Heusner, with a posse of men, paid a visit to Manheim township, a few miles from town, for the purpose of arresting several drafted men who had failed to report. Upon reaching the place where one of them, named Runk, lived, he endeavored to escape, and being called on to ‘halt!’ and not paying attention to the command, one of the guards fired at him, the ball passing through a door, striking a piece of iron and splitting, one of the pieces of which taking effect in Runk’s head, made a bad looking wound. The wound, however, is not considered dangerous. He was brought to town, and forwarded to Headquarters the same day.”

The stubborn man who refused to report was 31-year-old Jesse Buser Runk, who had been drafted on August 13. A farmer by trade, Runk recovered from his wound and enlisted in Carlisle in the 143rd Pennsylvania Infantry. He stood 5′ 6″ tall and had brown hair and blue eyes, according to his military records.

He had survived the head wound that the York County posse had inadvertently inflicted but he could not survive the Confederates on the battleground. He was mortally wounded on May 5, 1864, at the battle of the Wilderness and listed as missing in action. His body was never identified.

He left a widow and four small children, the oldest only eight and the youngest a two-year-old toddler.

Several local citizens pleaded to be excused from the military draft for religious reasons. Click here for a list of known conscientious objectors in York County. See also this excellent book on some of the main denominations that discouraged congregants from enlisting.