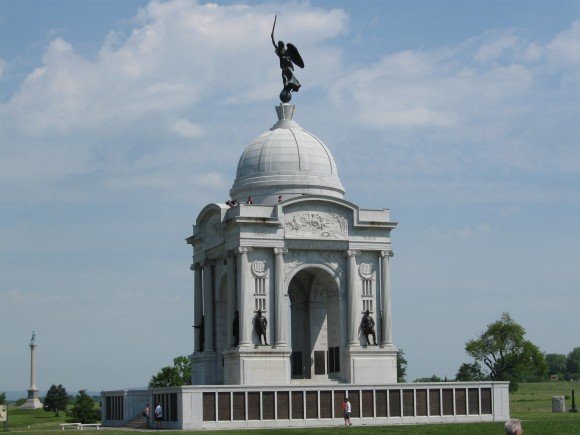 Protecting the roads to York and Hanover

I took a day of vacation today from work to tramp a forgotten part of the Battle of Gettysburg with Ranger Troy Harmon and 40 or so folks from an Internet group of military history enthusiasts. I came home to shower and change clothes before I give a talk to the group tonight on Gordon’s expedition to York and the importance of the roads into York County.

Troy’s battle walk tonight was interesting, despite the persistent rain. He spent a lot of time talking about the strategic importance of the area we tramped (Wolf’s Hill, “Lost Avenue,” Highland Avenue, and the Hanover Road / Route 116, as well as Benner’s Hill and Hospital Hill (later Camp Letterman)). All were critical spots where both the Union and Confederate forces tried to turn each other’s flanks, opening the roads to York and Hanover, as well as the vital Baltimore Pike down to Union supply lines in Westminster, Maryland.

Late on July 1, 1863, who did Confederate high command entrust to repel any threats from a large body of Yankees approaching the area? John Gordon and “Extra Billy” Smith, both of whom had recently traveled to Gettysburg from their billets on June 29 – 30 near York. Likewise, Federals in the area included Judson Kilpatrick’s cavalry, fresh from the Battle of Hanover, as was J.E.B. Stuart’s Rebels. The roads to York and Hanover would prove of major interest to both armies, and the bitter fighting at East Cavalry Field on July 3 and at Brinkerhoff’s Ridge (a seldom-visited spot on 116) kept the road to Hanover in Union hands, while the road to York remained under CSA control (White’s Comanches and Smith’s infantry were stationed there for parts of the battle).

So, even during the Battle of Gettysburg, the two mains roads leading to York County were always on the minds of the commanders of both armies. Not much is written about the jockeying and maneuvering along these two roads on July 1, 2, and 3, but a lot of men struggled to gain an advantage, and hundreds were killed or wounded on the eastern battlefield, much of which is in private hands today.