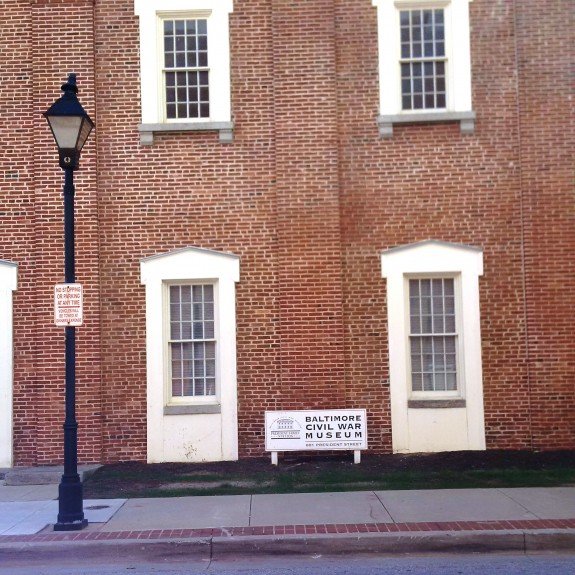 During the Civil War, three separate railroads served Baltimore, Maryland. Because of city ordinances against noise, locomotives could not be run through downtown. So, the railroads had their own terminals and tracks a few blocks apart, interconnected with city streets and the streetcar rails.

These railroads were the Baltimore & Ohio, which operated from Camden Street Station; the Northern Central, with its headquarters at Calvert Street Station; and the Philadelphia, Wilmington, &  Baltimore, which had its main passenger station (shown above) at the intersection of S. President and today’s Fleet Street.

Although the tracks, train sheds, freight depot, and warehouses of the PW&B have long since been razed and replaced by modern structures, the old station head has been preserved and is now the Baltimore Civil War Museum.

Recently, I was asked to speak on the Northern Central Railway inside the museum as a part of the 155th anniversary commemoration ceremonies for the April 19, 1861 Pratt Street Riot (also known as the Baltimore Riot). Angry pro-secessionist civilians, fearing a Federal occupation and wanting to block troop movements to Washington, formed a mob and attacked the passing 6th Massachusetts Infantry. The soldiers fired back, and more than a dozen infantrymen and civilians died in the swirling chaos.

Here are some photos of the modern museum. 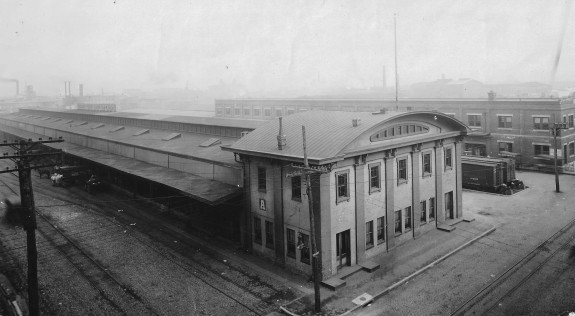 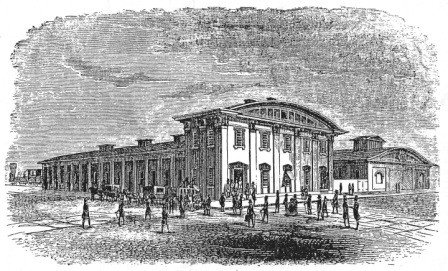 The station during the Civil War years, with the old freight depot to the right. (Robert Williams collection). 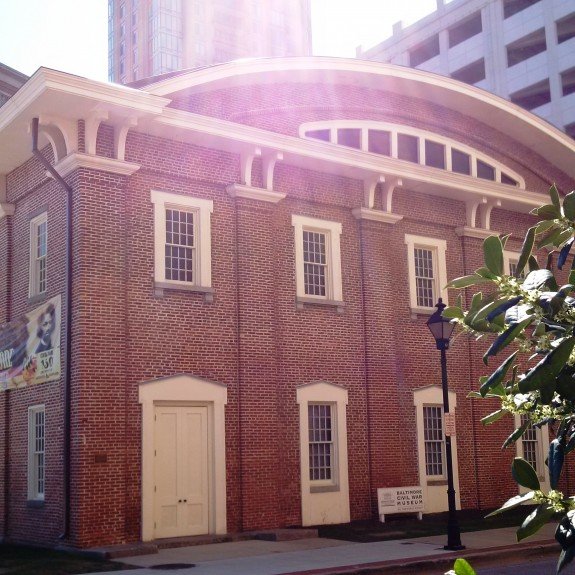 Modern view of the passenger station taken from across the street. During the building’s heyday, this was the front entrance. A group of Civil War reenactors and the Friends of President Street Station spearheaded efforts to save and restore the dilapidated depot late in the 20th Century. 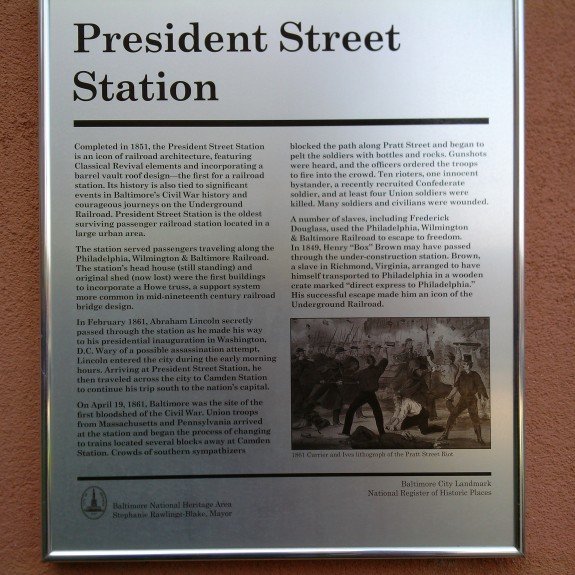 Commemorative plaque on the eastern wall of the restored depot, near the modern front entrance off of today’s S. President Street (which runs through the location of the old train sheds). 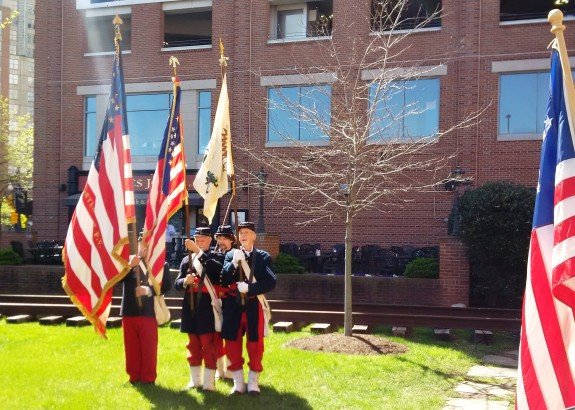 The color guard of the 6th Massachusetts Infantry were on hand for the commemoration of the Pratt Street Riot. Four soldiers and twelve citizens died in the melee; 36 other soldiers and an unknown number of civilians were injured or wounded. The mayor of Baltimore, George Brown, and the police marshal, George Kane, failed to keep order despite repeated efforts as the mob grew out of control and turned ugly. 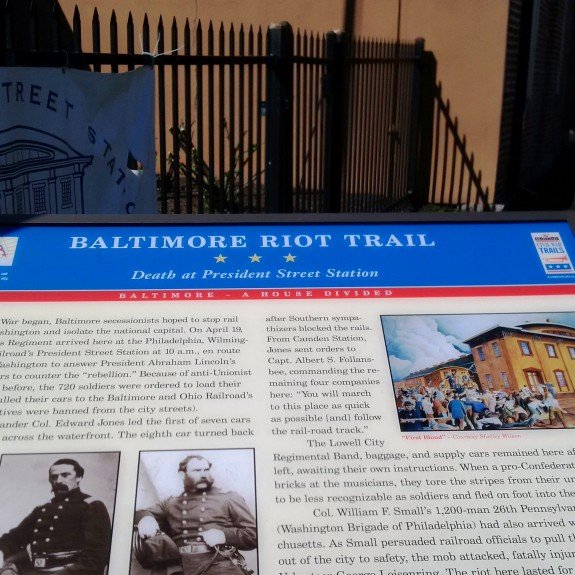 A wayside market at the corner of Fleet and S. President remembers the fighting, which took place at various spots between President Street Station and Camden Street Station as the Massachusetts troops tried to pass through the city. 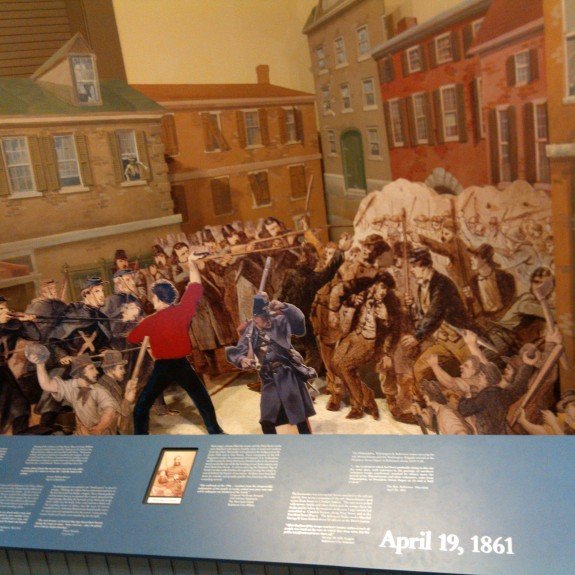 Inside the museum, this display of cut-outs recalls the fury of the Baltimore Riot as soldiers desperately fight their way through a mob equally determined to stop them. 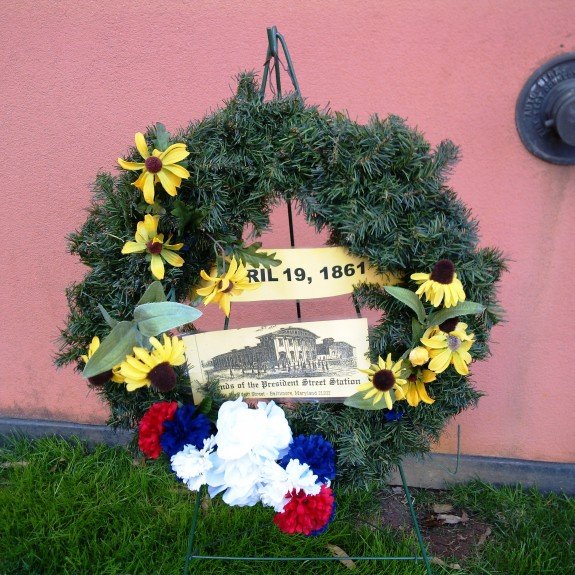 The Friends of the President Street Station presented a commemorative wreath in memory of the events of April 19, 1861. The Black-eyed Susan is Maryland’s state flower. 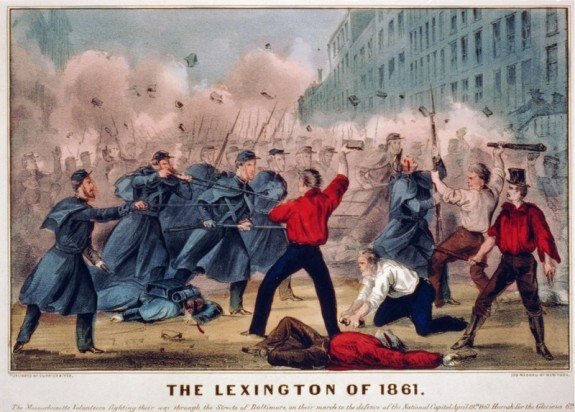 Vintage Currier & Ives print of the riot (Library of Congress). The words to the state song, Maryland, My Maryland, reflect the Pratt Street Riot. James Ryder Randall wrote, “The despot’s heel is on thy shore, Maryland! His torch is at thy temple door, Maryland! Avenge the patriotic gore That flecked the streets of Baltimore, And be the battle queen of yore, Maryland! My Maryland!” 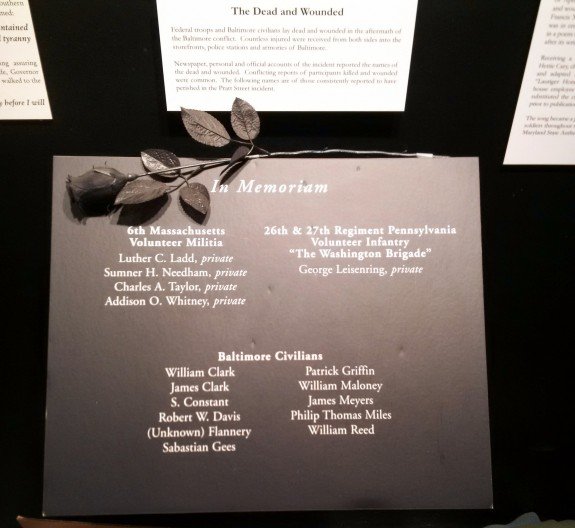 This plaque inside the Baltimore Civil War Museum commemorates those killed in the riot. Charles A. Taylor had just enlisted before the 6th Massachusetts left Boston for Washington; he was clad in an army overcoat and civilian clothing. His body was supposedly buried in Baltimore but the exact current location of his remains in unknown. An early 19th-century newspaper account suggests that at the time, a pile of bones and ragged clothing kept in a church was the ill-fated Taylor. Efforts by his comrades to learn more about him or find his family members failed, and he remains an enigma. 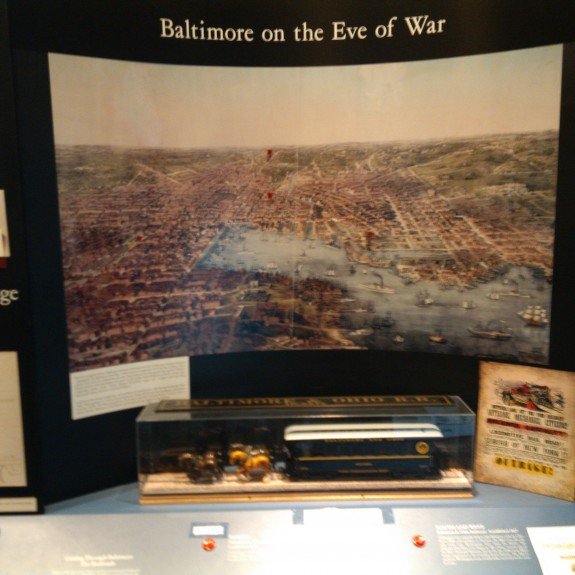 Displays in the Baltimore Civil War Museum discuss the pre-war city, its transportation network (note the model of a horse-drawn car in the foreground). 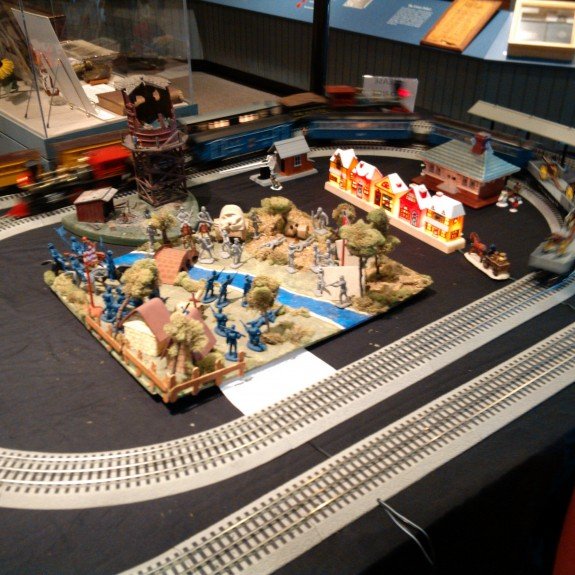 Children can operate this toy train, which runs on tracks surrounding a mock battle of  54mm plastic toy soldiers. 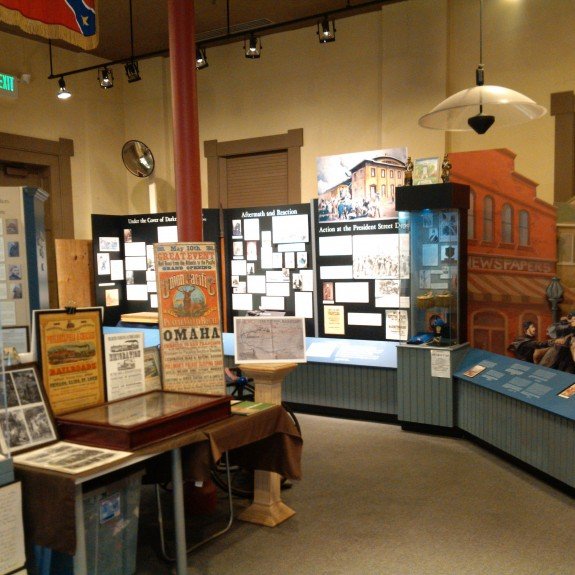 The old passenger depot was relatively small (smaller than the rival Northern Central and B&O stations), but the Friends of the President Street Station have crammed in a very large number of interpretive displays and artifacts. 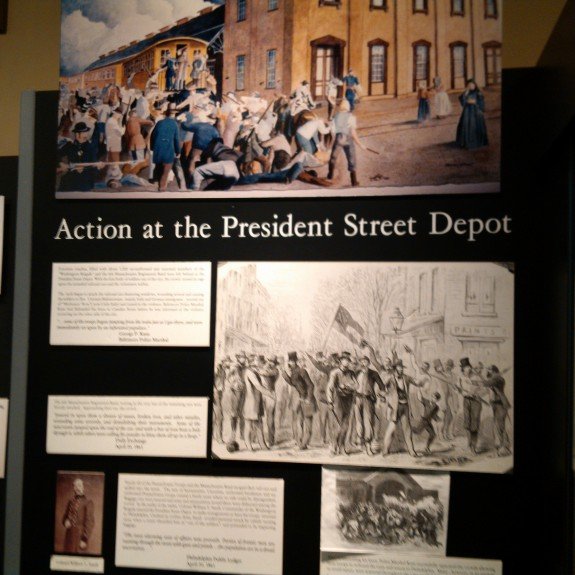 Admission to the museum is only $3 for adults, and children 12 and under are free. It is well worth a visit! 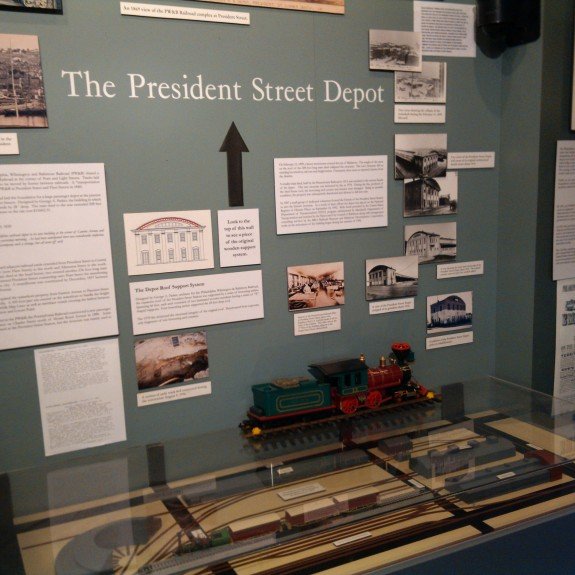 A model shows the track layout and approaches to the passenger depot and associated freight depot. 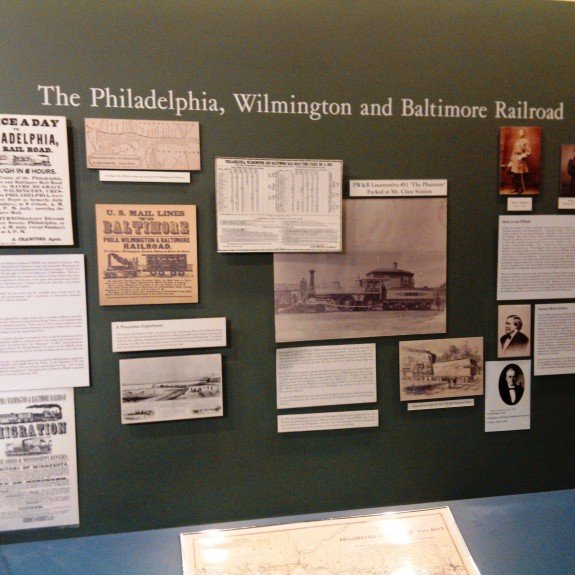 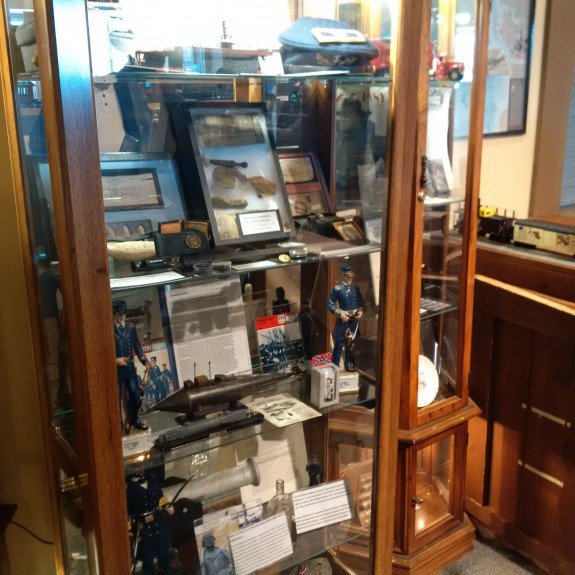 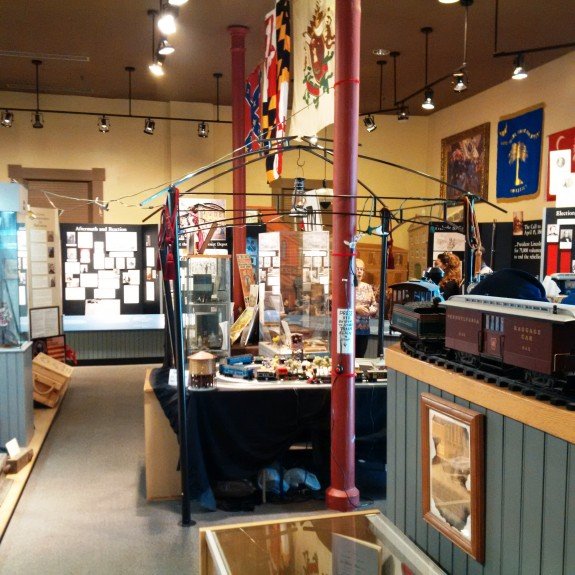 The Baltimore Civil War Museum is easily accessible from I-83 (the Jones Falls Expressway). Simply continue south on President Street as the interstate ends in downtown Baltimore. The museum is at 601 S. President Street. A parking garage next door is the best option for parking, and there are metered spots along many nearby streets. There are a few free curbside spots on Eastern Avenue. Next door to the museum is the James Joyce Irish Bar and Restaurant, and within a short walk are all sorts of other restaurants, as well as the Baltimore Marriott.