President Lincoln to appear at York Civil War Round Table on Nov. 20 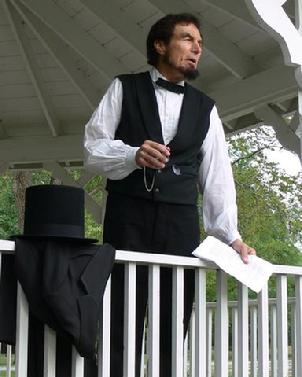 In commemoration of the 150th Anniversary of the Gettysburg Address, the York Civil War Round Table has scheduled living historian James Hayney portraying Abraham Lincoln, the 16th President of the United States. The presentation is titled “The Gettysburg Address: Facts and Myths.”

The first-person presentation is FREE to the public and everyone is welcome. The meeting will be at 7:00 p.m. on November 20 in the Library and Archives of the York County Heritage Trust, 250 E. Market Street, York, PA.

On November 19, 1863 President Abraham Lincoln traveled to Gettysburg to deliver a brief speech at the dedication of the new Soldiers’ National Cemetery. His moving speech, which took only two minutes to deliver, would inspire the nation and stay in the minds and hearts of Americans forever. “The world will little note, nor long remember, what we say here, but it can never forget what they did here.”  — Abraham Lincoln, from the Gettysburg Address.

James Hayney has portrayed Lincoln for the National Civil War Museum in Harrisburg and in more than 100 plays nationwide. Having studied the man for nearly a decade, he will debunk, clarify, and discuss details concerning the life of one of America’s most esteemed presidents.