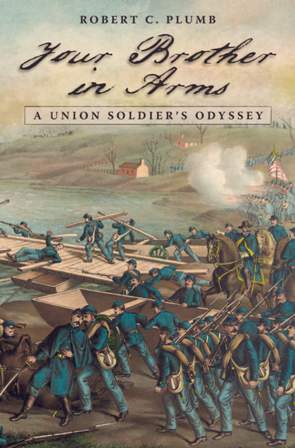 “But just now it’s too cold to think of fighting,” wrote George Pressly McClelland of the 155th Pennsylvania Infantry on December 19, 1863, in a letter to his sister Lizzie. “The near approach of the Holidays suggest turkeys, mince pies, and such like.” Some of his comrades were returning home on short furloughs, but McClelland doubted if he could make it to see his sister in Davenport because of the distance and time required.

McClelland saw some of the worst fighting of the Army of the Potomac as a member of the Fifth Corps, including Antietam, Fredericksburg, Chancellorsville Gettysburg, and the Overland Campaign of 1864. His frequent letters to various family members have been preserved as a collection over the past almost 150 years, and Robert C. Plumb has weaved them into an excellent narrative on the movements and battles of the 155th Pennsylvania.

Recruited in the fall of 1862 shortly before the Battle of Antietam, McClelland and his regiment briefly passed through scenic Pennsylvania on their way to Washington from Pittsburgh. McClelland would spend the next few years as a soldier in the Federal army. His fascinating tale is presented in Plumb’s new book, Your Brother in Arms: A Union Soldier’s Odyssey, recently published by the University of Missouri Press.

Author Robert C. Plumb, a marketing consultant from the Washington, D.C., area, has taken McClelland’s many letters and arranged them chronologically. He adds an interesting and well written narrative of the regiment’s many campaigns and battle engagements with the Confederate Army of Northern Virginia. We follow young McClelland from his early days as a 19-year-old recruit experiencing the horrors of Antietam to his discharge as a wounded veteran at the war’s end in the spring of 1865. Nursed back to health by his beloved sister Annie, McClelland lived until 1898.

Plumb organizes his material within each chapter with a historical backdrop in the movements and doings of the Army of the Potomac, and then narrows the focus first to the regiment and then to the soldier, George P. McClelland, including presenting the young soldier’s letters and ensuing commentary. The book is well written, easy to follow, and insightful into the psyche of a typical Civil War soldier struggling with missing his family and home life, coupled variously with the uncertainty, boredom, and fear of army life.

The book contains illustrative maps from cartographer Steven Stanley of the Civil War Preservation Trust, as well as a handful of period photographs of George P. McClelland, key leaders of the Army of the Potomac and its enemies in the Army of Northern Virginia, locations seen by McClelland, and some of his letters home.

Your Brother in Arms is an excellent resource for those interested in the 155th Pennsylvania, as well as a useful material on the Army of the Potomac in general. Of specific interest, and as the heart of the book, are McClelland’s letters. They range from evocative and philosophical to whimsical and heart-wrenching, and are full of rich content. They help us understand not only McClelland the soldier, but also of more importance, McClelland the man.

The publisher offers the following comments:

“George P. McClelland, a member of the 155th Pennsylvania Infantry, witnessed some of the Civil War’s most pivotal battles. Never before published, his letters to his family offer fresh insights into camp life, battlefield conditions, perceptions of key leaders, and the mindset of a young man who faced the prospect of death nearly every day of his service. Plumb expounds on McClelland’s words by placing the events in context and illuminating the collective forces at play in each account, adding a historical outlook to the raw voice of a young soldier.

Bob Plumb walked the battlefields (except for one on private property) that McClelland fought on and presents a layered study of the Union army, McClelland’s infantry, and this one individual’s hardening from a farm boy into a soldier.”