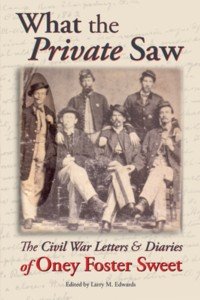 Oney Foster Sweet was a native of rural Susquehanna County, Pennsylvania. While still a teenager, he enrolled in the Union army in the 1st Pennsylvania Light Artillery (43rd Pennsylvania Volunteers), Battery F. Popularly known as “Ricketts’ Battery” for its commander Capt. Bruce Ricketts, the battery helped defend East Cemetery Hill at the Battle of Gettysburg, hurling shells at the oncoming men of Jubal Early’s Confederate division and then engaging in hand-to-hand combat with some of the famed Louisiana Tigers. Sweet survived that harrowing night and served his guns the rest of his term of enlistment.

Sweet was a prolific writer, sending letters back home to family members, keeping a diary, and then later after the war writing various remembrances. California-based writer and historical reenactor Larry M. Edwards has compiled Sweet’s documents, annotated them, and memorialized them for the future in a new book released by Wigeon Publishing in early April 2015 entitled What the Private Saw: The Civil War Letters & Diaries of Oney Foster Sweet.

This is a fascinating look at the life of a young artilleryman; his thoughts, fears, opinions, travels, and travails. Sweet’s writings give the reading a good idea of his evolution from a raw recruit into a combat-hardened veteran of many fierce battles.

“The unwritten part of our war is greater than all that has been written. Two soldiers side by side in a hot place in our battles did not see the same things. The generals did not see what the privates saw.” – O. F. Sweet.

Sweet either did not write many letters the first two years of the war (because only a few are known) or the rest have been lost. However, in 1863, numerous letters exist, as well as his daily diary entries. Edwards has compiled these documents in chronological orders, added several interpretive footnotes, and placed Sweet’s writings in their proper historical context.

Sweet served with several soldiers from York County, Pa., in Ricketts’ Battery. However, he does not mention many of them in his diary entries, with the possible exception of Morgan Bahn of Hellam Township (he mentions a “Baum” in one diary entry, but no one by that name is on the roster).

Edwards’ new book is a useful and welcome addition to the historiography of Pennsylvania soldiers and military units in the Civil War, as well as to the documentation of the battle of Gettysburg. I could have used some of Sweet’s commentary on the July 2, 1863, fighting on East Cemetery Hill when I was writing my book, The Louisiana Tigers in the Gettysburg Campaign. Calling them “desperate men” who “had never failed in a charge,” Sweet briefly describes their twilight attack. “…nothing daunted, they closed up where their line was blown away, and rushed forward with deafening yells… the giving way of our line upon the left brought the Tigers onto his [Ricketts’] flank. Pouring in a volley from behind a stone wall that ran close to his left piece, they leaped the fence, bayonetted [sic] the men, spiked the gun, and killed or wounded the entire detachment, save three, who were taken prisoner…”

To read the rest of Sweet’s thoughts on Battery F’s time at Gettysburg as well as the rest of the war, pick up a copy of What the Private Saw. It will be well worth your time.