York, Pennsylvania, was the largest town north of the Mason-Dixon Line to be occupied by Confederates during the American Civil War. Although larger cities such as Cincinnati and Harrisburg were threatened, they did not see Southern battle flags waving in their streets as did York residents.
York, a town of some 8600 people at the time of the Gettysburg Campaign, was an important side objective for the Army of the Northern Virginia in its June 1863 campaign to seize supplies and horses in south-central Pennsylvania while advancing on Harrisburg. The town would provide $28,610 in cash in response to a ransom demand by Maj. Gen. Jubal A. Early, as well as supplies such as shoes and boots and three days of food.
Before the war, the Underground Railroad passed through York. Escaped slaves and runaways, as well as other refugees such as John Brown raider Oswald Perry Anderson, often found shelter and food before passing eastward to Lancaster County. 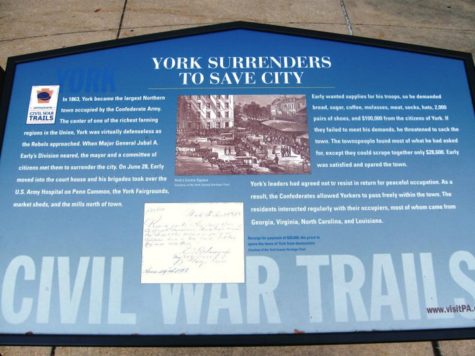 The “surrender” of York has been at times heatedly discussed and debated throughout York’s history, beginning in the days after General Early’s Southerners left town and headed west toward Gettysburg. Chief Burgess David Small, a Democrat, faced character assassination from his Republican rivals, and he resorted to defending himself in the York Gazette, a newspaper he owned. Businessman A.B. Farquhar, who met with one of Early’s subordinates and negotiated the first agreement to protect York, withstood taunts that he had sold out the town, including some good-natured ribbing from President Lincoln.
The Pennsylvania Civil War Trails program is meant to publicize the rich Civil War history of the commonwealth. Well marked driving trails lead to towns where significant events occurred during the war, including York.