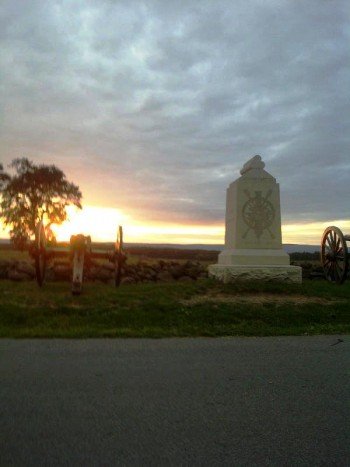 Here is the current schedule of events (subject to change):

November 16  From Lincoln’s Desk: A Special Display of Signed Documents
View a special exhibit in the Gettysburg Address Gallery of the Museum of the American Civil War including the following documents:  pages with signatures of individuals who attended the November 19, 1863 Dedication Ceremony in Gettysburg; a letter from President Lincoln to a member of his administration specifying remarks in a newspaper, and a signed pardon from President Lincoln.
Date:  Opening Saturday, November 16 (through 2013)
Place:  Gettysburg National Military Park Museum and Visitor Center, Museum of the American Civil War
Fee:  Included in the price of the museum ticket
Time:  Daily, 8:00 a.m. to 5:00 p.m.

November 16-17  Regarding Lincoln:  A Multi-Author Book Signing Event
Join award-winning authors for a special book signing event commemorating the 150th Anniversary of the Gettysburg Address. Noted writers of adult and children’s books on Abraham Lincoln, the Gettysburg Address, the battle of Gettysburg and the American Civil War will be available to answer questions and sign their works.

Breaking Down the Gettysburg Address Line by Line, with NPS Ranger Troy Harman

Dissecting the Gettysburg Address uncovers a profound understanding of enlightenment philosophy, Evangelical Christianity, ancient symbolism, gender history along with the promises and pitfalls of democracy. In many ways, the address capsulizes American History within the context of Western thought.

Millennium of Glory: Edward Everett and the making of his Gettysburg Address, with NPS Ranger Chris Gwinn

Edward Everett was one of the most prominent American statesmen and orators of his day. Though overshadowed by Abraham Lincoln’s immortal Gettysburg Address, the two hour oration Everett composed for the dedication of the Soldiers’ National Cemetery ranks as one of the towering achievements of his life. Who was this man and what did he hope to say that November day in 1863?

Lincoln Under God at Gettysburg, with NPS Ranger Chuck Teague

Our 16th President carefully crafted his Gettysburg Address to read verbatim at the dedication of the Soldiers National Cemetery. Yet on the platform he was inspired to add two words he would have avoided prior to the Civil War. The story behind his change in perspective is little-known but important in appreciating Lincoln’s emerging faith, and the impact Gettysburg had upon him.

November 18  These Honored Dead: Death and Rebirth in the Civil War
Join the Gettysburg Foundation, Gettysburg National Military Park and Gettysburg College for a panel discussion with acclaimed filmmaker Ric Burns, director of documentary film “Death and the Civil War,” Harvard President Drew Gilpin Faust, author of This Republic of Suffering: Death and the American Civil War (Random House, 2009), on which the documentary is based, and Admiral Mike Mullen, former Chairman of the Joint Chiefs of Staff.  Q & A with the audience will follow.

November 18  An Evening at the David Wills House
Visit the place where President Abraham Lincoln, orator Edward Everett and numerous other dignitaries spent the evening 150 years ago on November 18, 1863, when the Wills family hosted 38 guests at their home the night before the Soldiers’ National Cemetery dedication ceremony. Tour David Wills’ office, where he oversaw the creation and dedication of Soldiers’ National Cemetery, and the room where Lincoln finished his now immortal Gettysburg Address the night before delivering “a few appropriate remarks.”

Secretary of the Interior Sally Jewell and Pulitzer Prize-winning historian James McPherson will share the keynote speaker role on November 19.

For specific information about how to attend, when to arrive, satellite parking, and shuttle buses, please visit:  http://www.nps.gov/gett/planyourvisit/150th-anniversary-plan-your-visit.htm

Fee Information: Free of Charge – No ticket will be required

Join celebrated filmmaker Ken Burns, creator of the PBS documentary The Civil War and more, for a DVD and book signing.

November 22 “Evening with the Painting”

Join the Gettysburg Foundation’s Sue Boardman, Licensed Battlefield Guide and author/historian, on the platform for an exclusive “after-hours” program Gettysburg Cyclorama painting at the .  Visitors will explore the history of the genre of cycloramas and in particular the history of the Battle of Gettysburg Cyclorama. Presentation will include a discussion of the massive multi-year conservation effort of our country’s largest painting. The painting concludes with extended time on the platform to view the painting in full light and a journey under the diorama to see how the illusion comes to life.