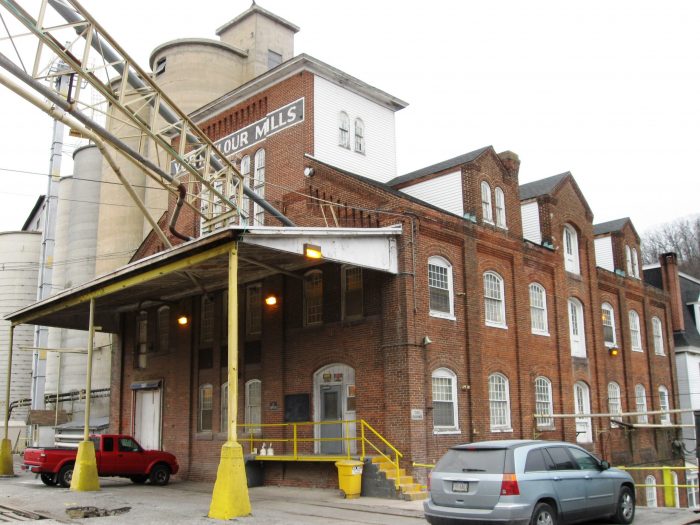 View of the modern York Flour Mills, which sits on the site of one of the 1863 flour mills operated by the firm of P.A. & S. Small, one of York’s leading food wholesalers for many years.

Philip Albright Small and his brother Samuel were among the leading citizens of York, Pennsylvania, during the mid-19th century. They inherited mills, land, and wealth from their industrious father, George Small, who built the original mill on the Codorus Creek in Manchester Township. They owned comfortable homes in downtown York, were well respected by most of the citizenry, and well networked within both the social and business fabric of York County and the region.

During the Gettysburg Campaign, the Small brothers were also known to the invading Confederate army. In fact, their mills were a particular target for Major General Jubal A. Early. 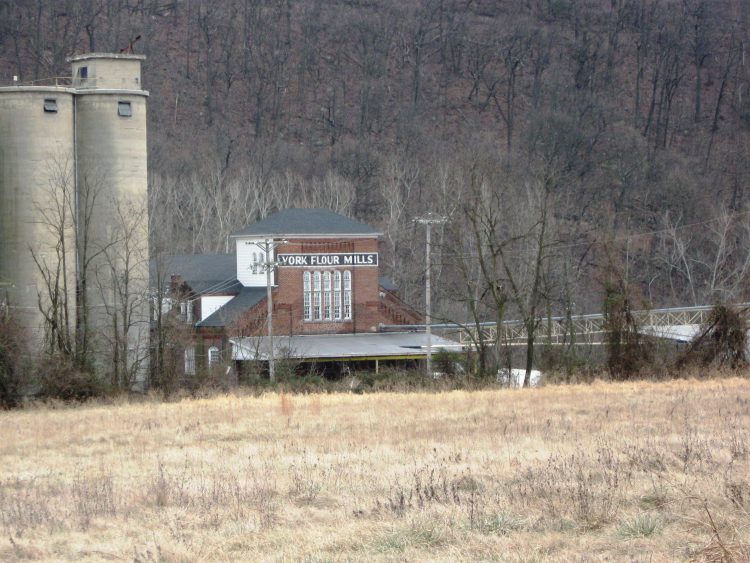 View facing northeast from a nearby field, looking toward the site of the George Small-built flour mill that was owned in 1863 by his sons, incorporated as the firm of P.A. & S. Small.

In June 1863, General Early’s Confederate division approached York County. One of his subordinates, Brigadier General John B. Gordon, was met at Abbottstown by a young industrialist from York, A. B. Farquhar, who demanded a meeting to discuss the protection of York’s women and children (as well as his farm implement business, of course). During the conversation, Gordon whipped out a map of York County, which was marked with the names of leading citizens and industries, presumably including the Small brothers’ mills (in fact, P.A. Small’s daughter Cassandra Morris Small later wrote that the Rebels said they knew all about the Smalls).

When Early’s column approached York from Weigelstown, he dropped off the brigade of William “Extra Billy” Smith near Emigsville (they camped on various farms, which will be the subject of a series of posts I will do in late February identifying various CSA campsites). A part of that brigade may indeed have camped in the field shown above, as their main camp site was not far away, and a couple of Virginia accounts mention being near the flour mills.

Another brigade, the Louisiana Tigers, encamped a little farther to the south on land owned by Zachariah K. Loucks (near another flour mill and the subject of a Cannonball post next week) and the nearby land of Samuel Hively. The Loucks mill was operated by P.A. & S. Small, and Early posted armed guards to prevent looting. The crusty Virginian ransomed York for food, money, shoes, hats, and provisions, and Small and Loucks were among the businessmen who contributed large quantities of flour to feed the hungry Rebels. (A postwar special tax helped defray their costs and repay the contributors).

However, on Monday, June 29, reports surfaced that the Tigers were ransacking the mills and disrupting operations by clogging the vital mill races (which provided the water power to turn the heavy millstones). An alarmed Samuel Small went to see General Early, who gave him a pass to travel out to the countryside to check for himself if anyone was disobeying orders about not harming the mills or private property. Small found to his relief that the guards were still in place and the unruly Tigers had not wrecked the operations. Soon, wagons arrived and hauled off all the flour as dictated by Early. It was distributed to the various Confederate campsites.

P.A. Small played an important role in the Gettysburg Campaign in local history. Not only were his mills targeted by Jubal Early for their ability to feed his army, Small’s hardware store on Centre Square became the de facto headquarters for York’s Committee of Safety as Gordon and Early’s columns approached the area. Union Major Granville Haller was notified at Small’s store that the townspeople wanted the militia gone, and would fend for themselves by surrendering the town and negotiating a peaceful occupation without military resistance. Small’s daughters later witnessed a somewhat pompous speech by Rebel general Gordon in front of their house (now the Lafayette Club across Market Street from the Yorktowne Hotel; the latter was not built until the following century).