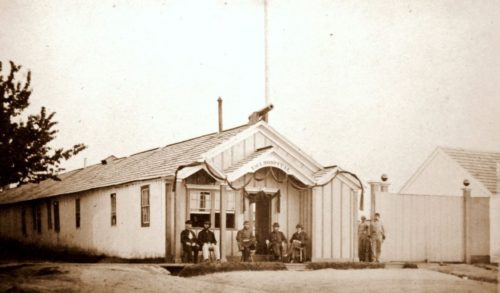 CDV image of one of the buildings of the US Army General Hospital in York PA (CDV image by Charles E. Wallin, author's collection)
Posted by Scott MingusJuly 8, 2018November 2, 2018 Army Hospital, Yankees, York

From the summer of 1862 until the summer of 1865, Penn Park on the south side of York, PA, was the site of a sprawling L-shaped complex of more than a dozen buildings that comprised the United States Army General Hospital. More than 14,000 soldiers received treatment there for various illnesses and injuries, including combat wounds. Less than 200 men died, a remarkable survival rate for the period.

Some of the convalescing patients stayed at the hospital for months. The supervisor, Dr. St. John W. Mintzer, in the latter part of the war had strict limits on the amount of time that soldiers could be away from the complex. Strolling the town was a popular form of relaxation when the soldiers were out and about. So was drinking and socializing in the many bars and brothels that dotted the area around the hospital. At times, this got out of hand and soldiers created a ruckus.

In one illustrative case, a trio of soldiers incited a “riot” that led to local authorities arresting them. The Court of Quarter Sessions of York County subsequently sentenced Nelson Wisney, Josiah B. Karr, and Levi Leek to six months in prison. Dr. Mintzer and other army doctors and staff petitioned the governor of the commonwealth, Republican Andrew Gregg Curtin, for a pardon.

Leek, from Stark County, Illinois, was a private in the 124th Illinois Infantry who had been reassigned to the Company K of the 16th Veteran Reserve Corps on April 2, 1864. He had been a patient for more than a year after fighting in U. S. Grant’s forces in Mississippi in the Army of the Tennessee. There is scant information available on the specific service of Wisney and Karr.

Seeking details on the incident and, more importantly, information on the character of the convicted soldiers, Curtin wrote a letter of inquiry to Mintzer, a letter the doctor kept in his personal papers which are now housed at the Historical Medical Library of the College of Physicians of Philadelphia.

In the note, dated January 23, 1865, Governor Curtin asked Mintzer, “As your name appears upon the application, I beg to inquire whether these men, if pardoned, would be willing to go directly to the front, and also whether, in your opinion, they are physically fitted for service in the field.” The latter was a key point, because the men were still considered to be convalescents. Curtin went on to ask on whose authority the three men had been removed from the army barracks and turned over to the custody of the civil authorities. Those facts did not appear on the application for a pardon, and Curtin was unwilling to act on it until he had the desired additional information. 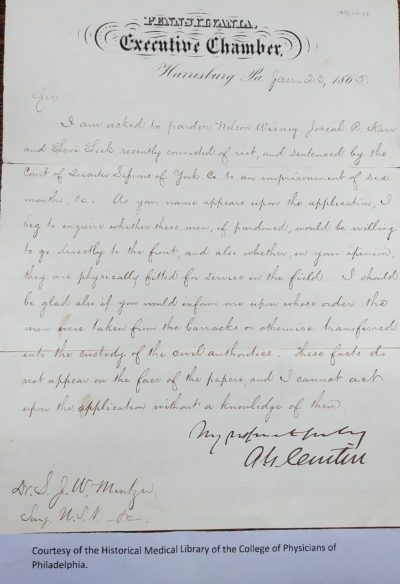 No followup letter appears in the Mintzer collection. Levi Leek, seeking a fresh start, moved to Missouri after the Civil War, where he raised prized short-horn cattle.