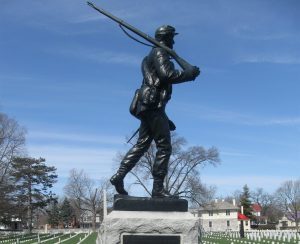 Winchester, Virginia, competes with Romney, West Virginia, for the distinction of having changed hands, in terms of military control during the Civil War, more than any town in America. Some accounts suggest that the Confederates and Yankees swapped control of Winchester more than 70 times as each side occupied the town and then moved on to other locations.

Winchester and the surrounding countryside saw six major Civil War battles — First, Second, and Third Winchester; First and Second Kernstown; and Rutherford’s Farm, plus numerous small skirmishes. The Shenandoah Valley Battlefields Foundation and other organizations have preserved parts of each of these old battlefields, although there is much still in private hands that could be added and interpreted in future years.

Winchester marks the site of the largest military setback any regiment with York County PA troops suffered during the war. At the Second Battle of Winchester, the 87th Pennsylvania (80% of them being York Countians) lost 43% of its approximately 750 men that entered the battle. Almost 300 men were taken prisoner; several of them later died in Confederate prisons such as Andersonville, Florence, and Marion.

Here are some photos from Civil War sites in and around Winchester: 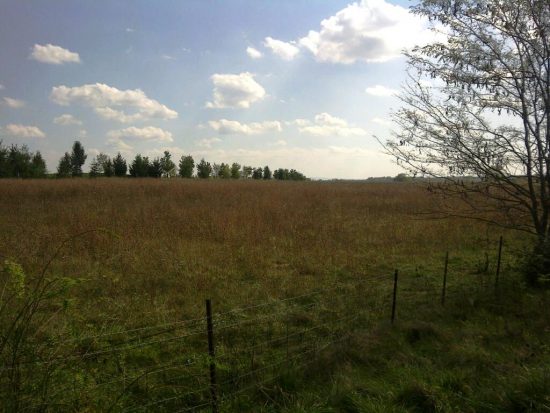 This field, along US Route 11 north of Winchester, is where the 87th Pennsylvania made its final charge on June 15, 1863, during the Second Battle of Winchester during the Gettysburg Campaign. Shortly thereafter, half the regiment surrendered while the remainder managed to escape and flee northward to West Virginia. Some headed to Harper’s Ferry while the rest went to Beverly or Berkeley Springs (the latter two groups later trekked to what is now Everett, Pennsylvania, while some walked home to Gettysburg or York). 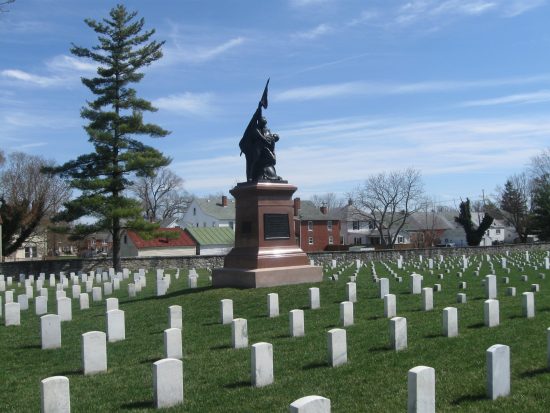 The National Cemetery at Winchester contains the graves of hundreds of Union soldiers, including some Yorkers, who died of disease or combat injuries while serving in the Shenandoah Valley. 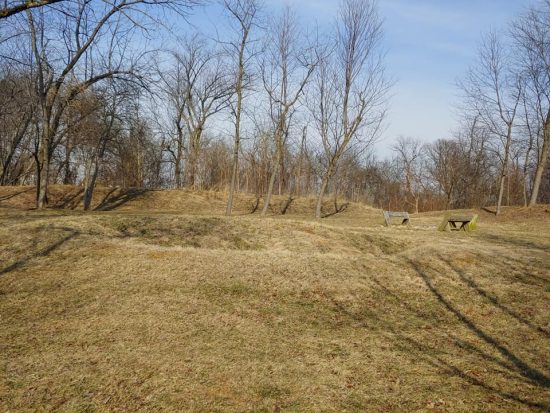 The Star Fort, off of Route 522, is the best preserved earthen fort in the Shenandoah Valley and one of the finest in all of Virginia. Nicely restored by volunteers from the SVBF and other groups, it is open to the public during daylight hours. The fort figured in both the Second and Third Battles of Winchester. 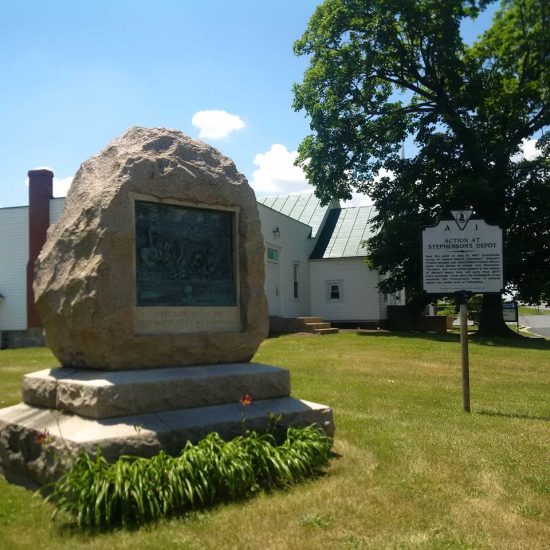 This monument is at the Stephenson’s Depot section of the Second Battle of Winchester along US Route 11 N. It remembers the enemy artillerists that the 87th Pennsylvania attempted to silence, unsuccessfully, before the Keystoners were forced back. 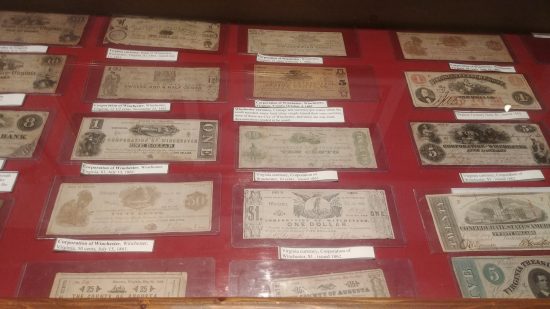 The Old Courthouse Civil War Museum, at 20 N. Loudoun Street along Winchester’s walking mall, features battle artifacts and various other displays, including Confederate money. The gift shop sells a wide selection of books, including mine on the Second Battle of Winchester. 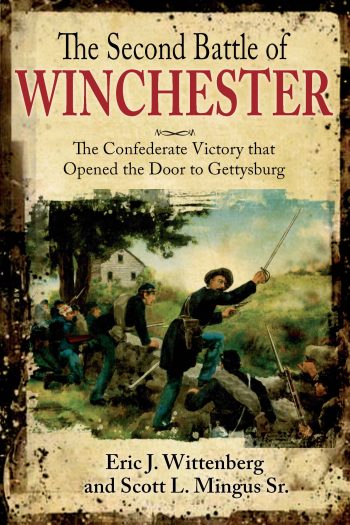 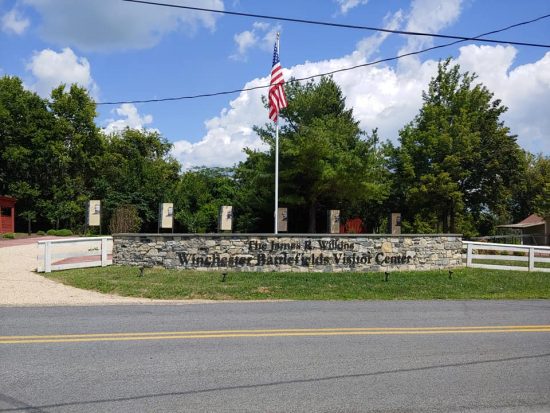 The entrance to the new Visitors Center is an excellent first stop to understand the six battles fought in this area. It is located at 541 Redbud Road (Route 661). Third Winchester has been recently preserved and interpreted and is a great place for a hike. 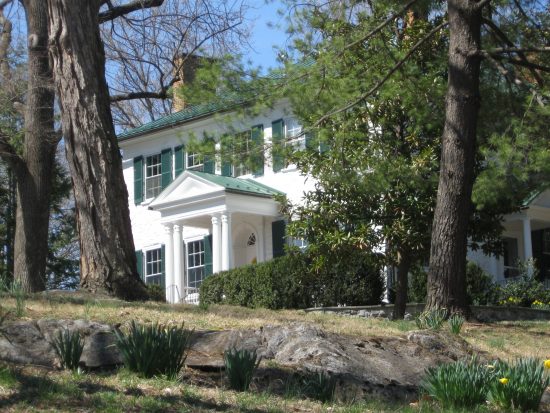 The town features scores of impressive older private homes that were present during the Civil War. During the winter and spring of 1863, Union troops, including several officers of the 87th Pennsylvania, were quartered in such residences. 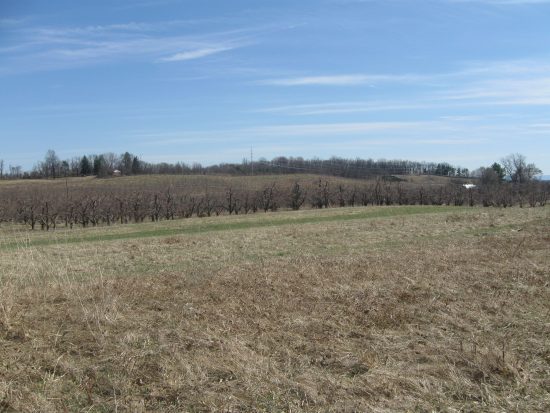 This image, taken from a spot near the Virginia Farm Market at 1881 N. Frederick Pike, shows the fields over which the famed Louisiana Tigers charged against the West Fort (remnants still exist in the tree line on the horizon). The Tigers drove off the defending Ohio troops and captured six fine Union rifled artillery pieces. Two weeks later, the Tigers would camp in York where the Harley-Davidson factory now is located. 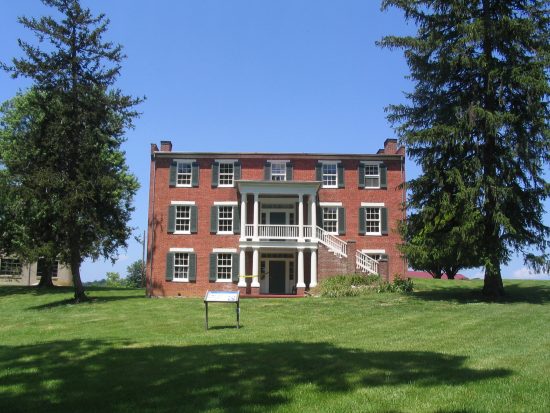 The Pritchard House is a landmark on the Kernstown Battlefield (610 Battle Park Drive south of Winchester). Wounded soldiers received treatment here after multiple battles. The battlefield is nicely preserved, with excellent hiking trails to the summit of Pritchard’s Hill. 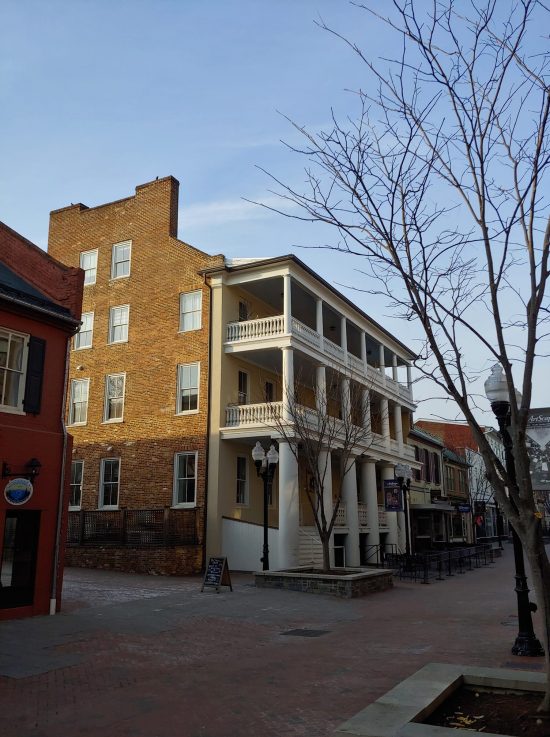 The former Taylor Hotel, where several ill soldiers from the 87th Pennsylvania were housed, is now a restaurant. It is a landmark along Loudoun Street, which has been blocked off for vehicle traffic and now is an outdoor walking mall lined with boutiques, book stores, restaurants, and museums. 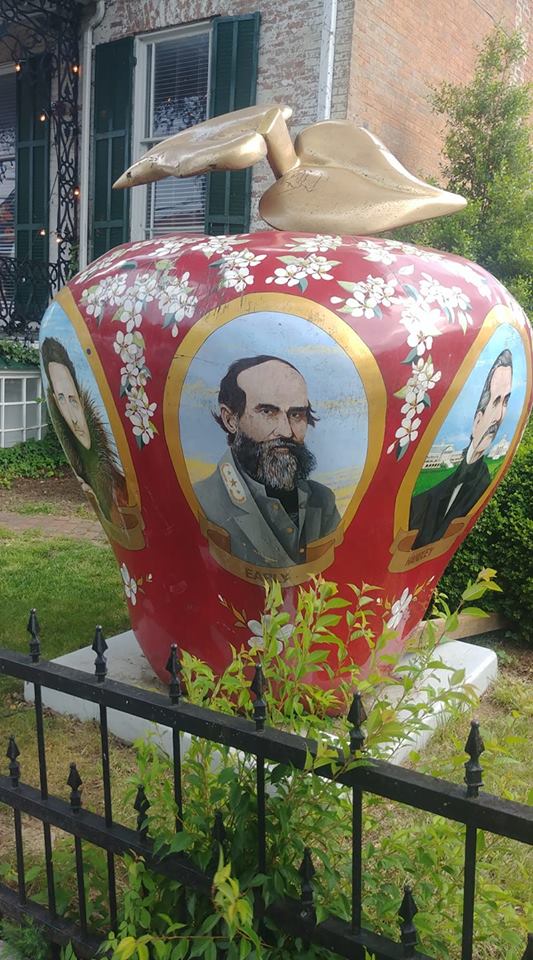 Winchester is the center of the Shenandoah Valley’s longstanding commercial apple industry, which rivals that of Adams County, PA, in terms of historical importance and production. This decorated apple depicts Confederate Major General Jubal A. Early, who fought in an around Winchester multiple times. He also accepted the surrender of York, PA, on June 28, 1863, which became the largest Northern town to fall to the Rebels during the entire Civil War.

If you go: Winchester can be reached in a little over 2 hours from York County via I-81 or by taking US 15 and US 340 down to Harpers Ferry and then following Route 7 to Winchester. Most of the Civil War attractions (Kernstown battlefield, Winchester battlefield, Old Courthouse Museum, etc.) are free. There is a modest fee to visit Stonewall Jackson’s headquarters or the impressive Museum of the Shenandoah Valley (901 Amherst Street). Both are recommended.

Multiple excellent choices exist for lunch or dinner, including the Union Jack (an English pub located in the former Union Bank) on the Loudoun walking mall. Nearby are Thai, Mexican, and other specialty restaurants. In good weather, particularly on weekends in pre-COVID days, street performers abound.