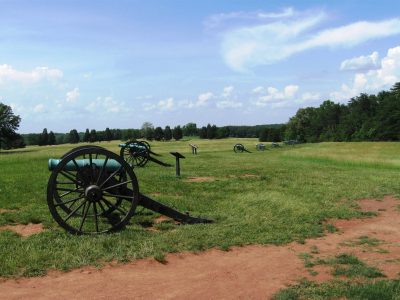 Manassas National Battlefield Park is a leisurely drive from my home in York, Pennsylvania, down U.S. Route 15 from Gettysburg. It is one of several battlefields readily accessible from that highway, including Gettysburg, Monocacy, Antietam, Ball’s Bluff, Manassas, Brandy Station, and others.

US 15 also offers easy access to the scenic Catoctin Mountains, historic Point of Rocks and the Potomac River / C&O Canal, “Mosby’s Confederacy,” several old plantations such as Oatlands, historic Leesburg, and other attractions. The road has become my favorite route into Northern Virginia for my recreational exploring as well as for business trips to Washington, D.C. or Dulles Airport.

The Manassas Battlefield is located in Prince William County, Virginia. The National Park Service administers the site, and park rangers frequently are available to answer questions or to lead guided tours of parts of the field, which saw two major battles. First Manassas (or Bull Run to many Northerners) was fought in July 1861 and 13 months later a second, larger battle covered some of the same ground.

Two Confederate generals’ names are linked forever in the lore of the First Manassas fighting. Brig. Gen. Bernard Elliot Bee, Jr. of South Carolina was trying to rally his men when he spotted a solid line of infantry in the distance. He cried, “There stands Jackson like a stone wall,” and from that time forward Thomas J. Jackson became Stonewall Jackson. One old account from an aide suggests that General Bee perhaps was not admiring Jackson’s grit and fortitude as much as he was criticizing Jackson for standing still and not moving forward. Bee’s true motives may never be 100% certain as he was killed shortly thereafter. However, his linking of Jackson and “stonewall” helped shape the public perception of Jackson, a former VMI instructor whose previous nicknames included “Old Tom Fool.” 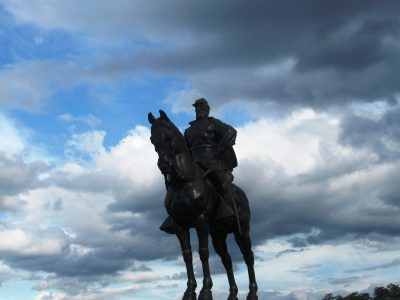 Critics have panned the Stonewall Jackson statue for many years, often using the term “Hercules” in deference to the buff physique of the rider and his horse. Jackson was a well known early proponent of Nautilus and Nordic Track, and his headquarters wagon carried the latest in fitness equipment from a variety of infomercials. In defense of the statue, it does convey a sense of strength, solidness, reserve power, and might.

All photos were taken on Memorial Day, 2010, by Scott Mingus.

Manassas National Battlefield Park attracts some 900,000 visitors per year, although that number will be significantly higher in 2011 and 2012 with the 150th anniversary of First and Second Bull Run respectively. Located close to Washington, D.C. Manassas is often a day trip for families visiting the nation’s capital.

The Visitors Center on Henry House Hill is the focal point for battlefield interpretation, and it contains a small museum and gift shop (here the first of my four grandsons stands in front of his favorite display, a case full of Wm. Britains 54mm toy soldiers in an interesting little diorama).

Park tour maps are available at the Visitors Center and cover the fields from both Civil War battles. There are more than 5,000 acres to explore in the park. Plan on a full day if you should visit Manassas, and there are several other attractions in the area of interest if you have multiple days available. Several nearby regional parks and a state forest nearby offer other hiking opportunities, as well as picnicking. The area also boasts several golf courses, restaurants, and shopping opportunities.

If you go:
Manassas Battlefield Park is directly off of Interstate 66 west of Washington, D.C. and Arlington, Virginia. It is southwest of Dulles Airport via Virginia Routes 28 and then 29. Route 234 (Sudley Road) leads from U.S. Route 15 southeasterly down to the park. Parking is free, but there is a very modest entrance fee to the park.
Please pay your fee at the Henry Hill Visitor Center.
$3.00 per person (16 years or older) – good for 3 days
Children under 16 – FREE
$20.00 – Manassas Annual Pass
That’s only 6 bucks for a couple and their children, less than a single movie ticket or a value meal at a fast food hamburger establishment.