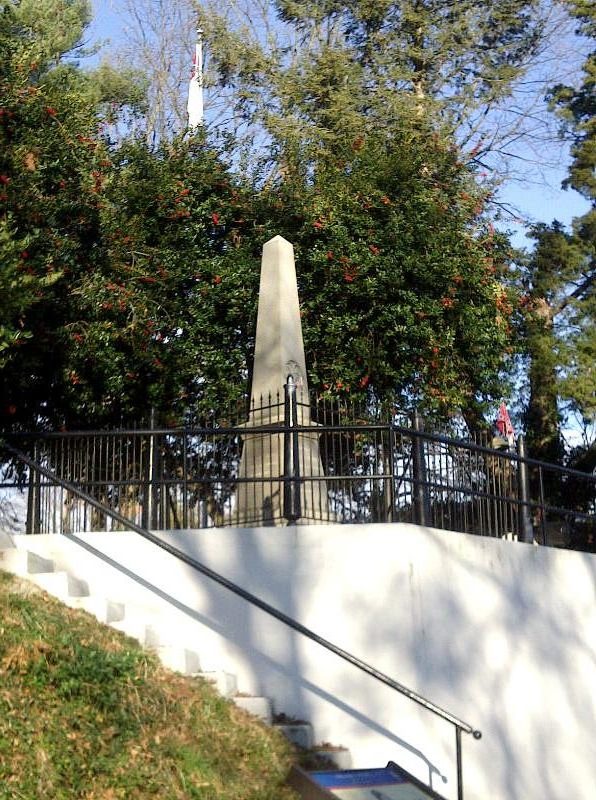 Yellow Tavern was the final battle in the Civil War for famed Confederate cavalry general James Ewell Brown Stuart. The impressive monument shown above sits alongside Old Telegraph Road near Glen Allen, Virginia, north of Richmond. Many of Jeb Stuart’s surviving men erected this memorial well after the war.

At the time of the battle, Telegraph Road was the main northern approach to Richmond but was supplanted after the war by US Route 1 (and much later by I-95). Today, the Stuart memorial is on a dead-end street in a quiet residential neighborhood of tidy and well-kempt brick homes.

Here are some photos of the Yellow Tavern battlefield, much of which is now covered with high-end condos and two-story suburban houses. 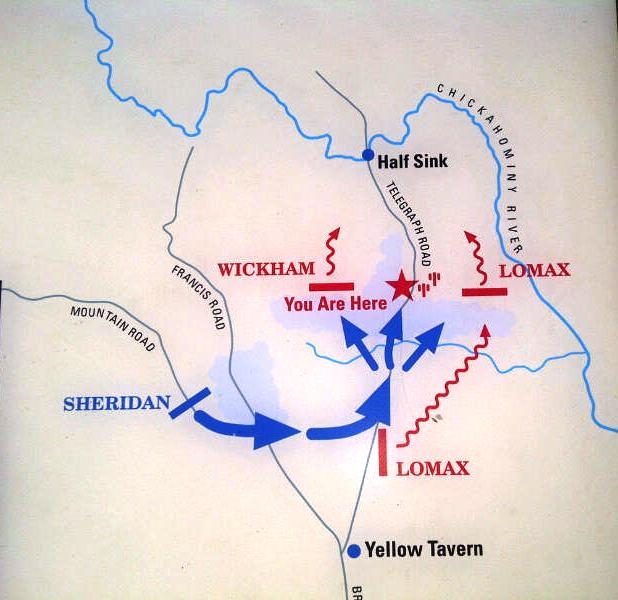 From the National Park Service’s website for the Fredericksburg and Spotsylvania National Military Park:

On May 8, 1864, 10,000 Union horsemen slipped away from Spotsylvania Court House and rode south toward Richmond looking for a fight. Their belligerent commander, General Phillip Sheridan, had boldly asserted that he could whip Confederate General J.E.B. Stuart if given the chance, and General Ulysses S. Grant decided to let him try. Stuart promptly detected Sheridan’s move and detached General Fitzhugh Lee’s division to harass Sheridan’s rear Stuart rode south with Generals Lunsford L. Lomax and William C. Wickham’s brigades to get ahead of the Northerners.

Stuart’s cavalry won the race to the northern outskirts of Richmond traveling night and day on exhausted horses. The jaded troopers reached the strategic crossroads at Yellow Tavern around 10:00 a.m. on May 11 and assumed a blocking position. Stuart formed his line in two wings. His right, under Wickham, took position west of the Telegraph Road, facing south. the left, under Lomax, formed at a right angle to Wickham’s brigade and ran along the Telegraph Road, facing west. 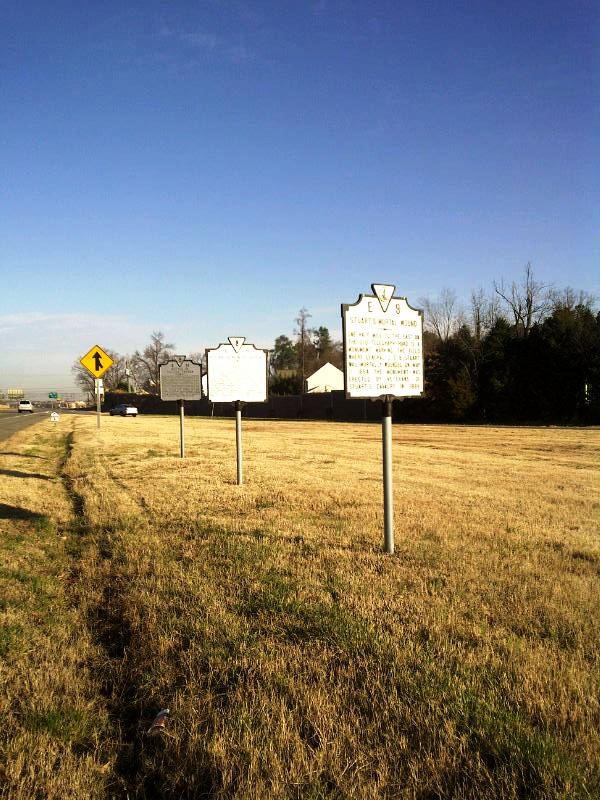 The van of Sheridan’s column reached Yellow Tavern within an hour of the Confederates’ arrival. Sheridan’s lead division under General Wesley Merritt, immediately attacked Stuart’s left, which paralleled the Telegraph Road. Both sides took heavy casualties particularly the troopers on the Union left who engaged Lomax’s brigade in front and caught a terrible flank fire from Wickham’s brigade to the north. When federal troopers edged around the southern flank, Lomax relinquished his position along the Telegraph Road and fell back on Wickham’s line. Stuart put Lomax’s men back into position, directing them to extend Wickham’s left on a straight line facing south. The two Southern brigades formed on either side of the Telegraph Road by 2:00 p.m. 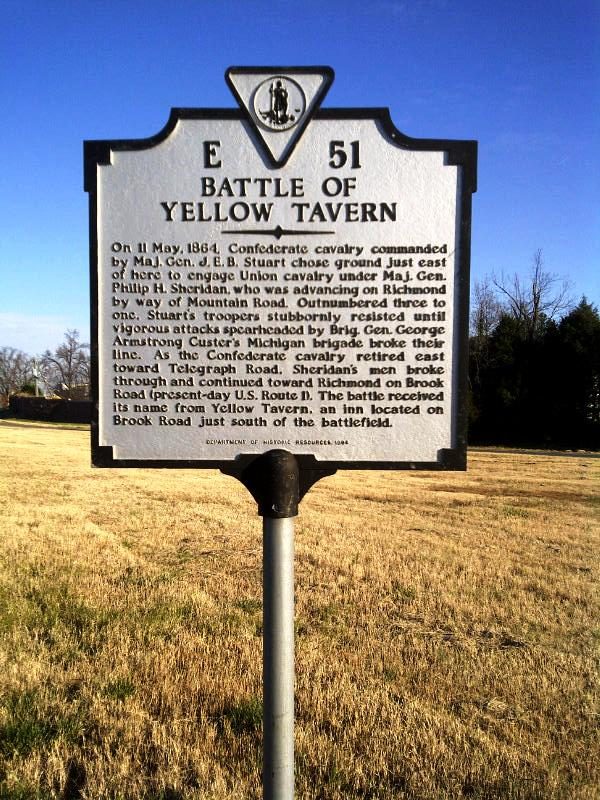 A two-hour lull fell over the fields around Yellow Tavern. In the interim, Phillip Sheridan repelled a sharp assault on his rear by General James B. Gordon’s Confederate cavalry. Meanwhile, Sheridan brought up the remainder of his force and reconnoitered Stuart’s new line. The Southerners availed themselves of the quiet to catch some more needed rest.

General George A. Custer deployed his Union brigade on Sheridan’s right. Custer spied several Confederate cannons placed on Stuart’s line and planned to capture them by flanking their position. He dismounted half of his brigade in preparation for an attack while Sheridan readied the rest of his command to assist. A bugle sounded the charge, and the dismounted soldiers closed in on the Confederate front. At the same time, Custer’s mounted troopers moved in a wide sweep to their right. The Southerners immediately divined Custer’s intention and turned their guns on the Federal horsemen. Custer’s men thundered toward the resounding guns, crossing five different fences before they encountered a bridge over the narrow span and up the hill, while Confederates poured a severe fight on them from the heights above the creek. 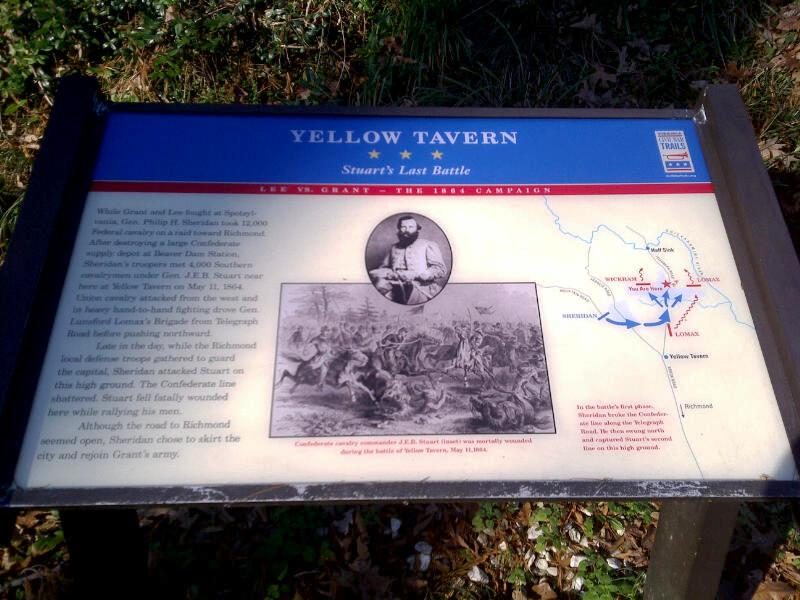 The Federal horsemen punctured Lomax’s brigade and pushed the Confederate let flank backwards. General Stuart rushed among his men and tried to rally them. Some of Custer’s men swirled past Stuart, but a timely counterattack by a portion of the 1st Virginia Cavalry stopped their progress and drove them back. As the Federals withdrew, Private John A. Huff of the 5th Michigan Cavalry hurriedly fired his pistol into a group of mounted Confederates by the Telegraph Road. J.E.B. Stuart clutched his side. His head dipped and the general’s plumed hat fell in the dust. he calmly whispered, “I am shot.” A trooper supported Stuart while another led his horse to the rear. 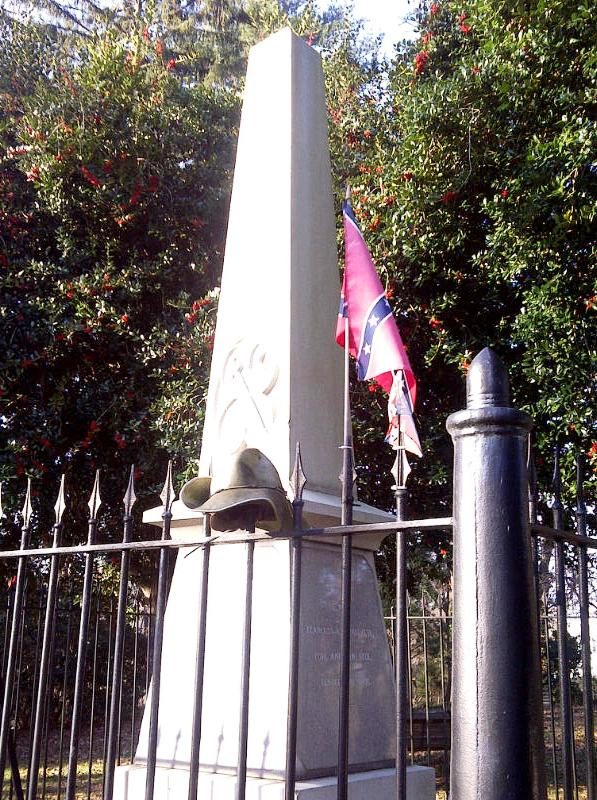 General Fitzhugh Lee assumed command upon Stuart’s wounding. he tried to maintain his lines under increasing Federal pressure, but parts of his division crumbled and fled the field. Stuart chided some of those, who raced past his ambulance. “Go back! Go back!” he cried, “Do your duty as I’ve done mine.” He ended with bloody emphasis, ‘I would rather die than be whipped.” Fitzhugh Lee simply lacked the strength to stop Sheridan. The two Confederate brigades held briefly against two Union divisions and then retreated across the north fork of the Chickahominy River and into the evening darkness. 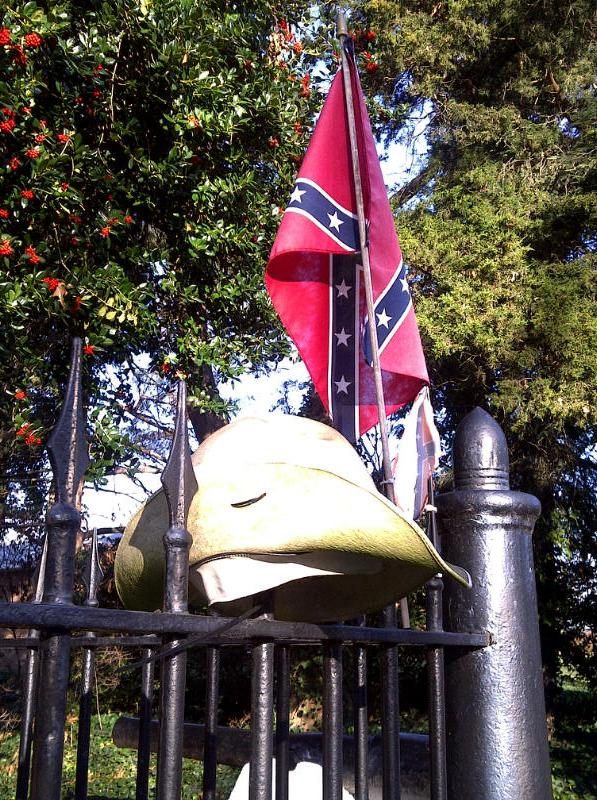 Sheridan had wrestled the Yellow Tavern battlefield from the Confederates and mortally wounded their leader. He had instilled a sense of victory among his troopers and dispelled some of the doubts about his abilities. J.E.B. Stuart had been badly outnumbered and outgunned, and the results were predictable. The Confederates, however, held their positions for a considerable time under lengthening odds. their efforts bought the Richmond defenders an opportunity to man the fortifications and discourage any Union attacks on the capital. 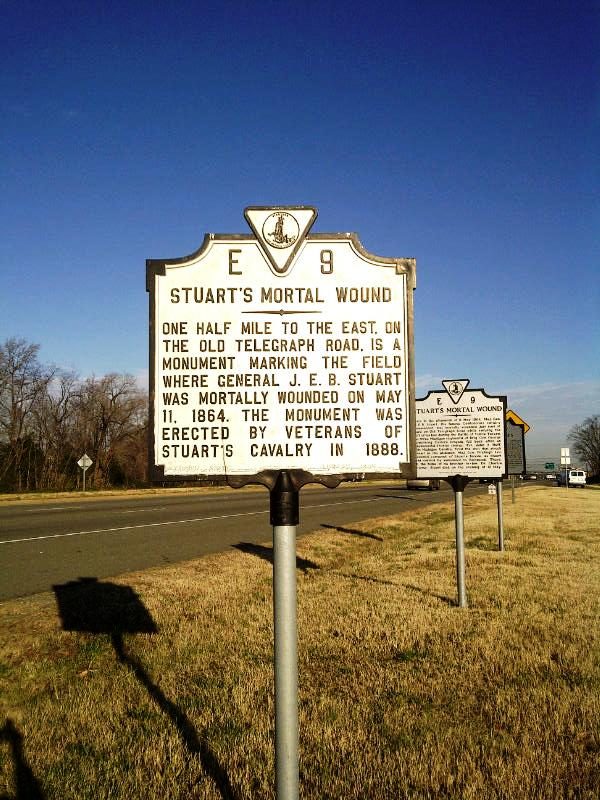 On May 12, Sheridan maneuvered his forces around Richmond and headed for Haxall’s Landing on the James River. That same day, J.E.B. Stuart died of his wounds at the home of his brother-in-law, Doctor Charles Brewer. Crowds had thronged outside the house on Grace Street and Confederate President Jefferson Davis had visited briefly before Stuart slipped into delirium and death. general Robert E. Lee received notice of Stuart’s end and remarked, “I can scarcely think of him without weeping.” 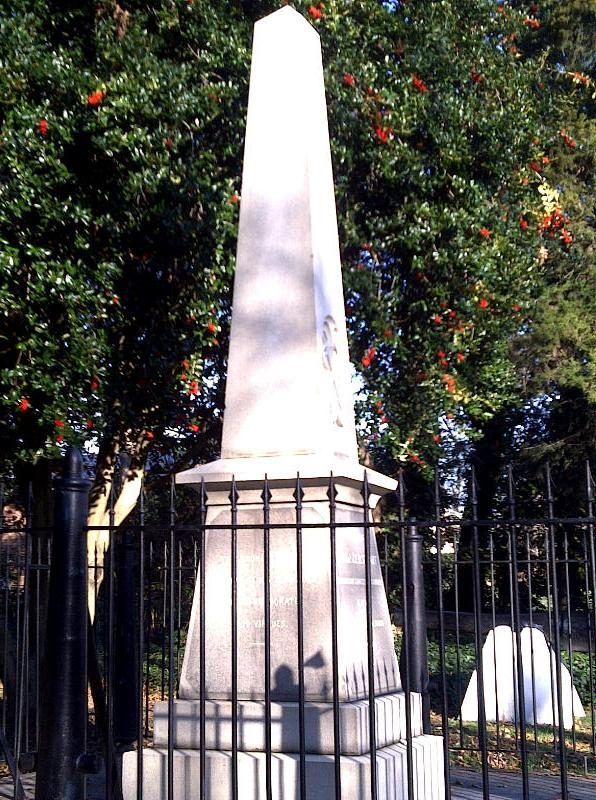 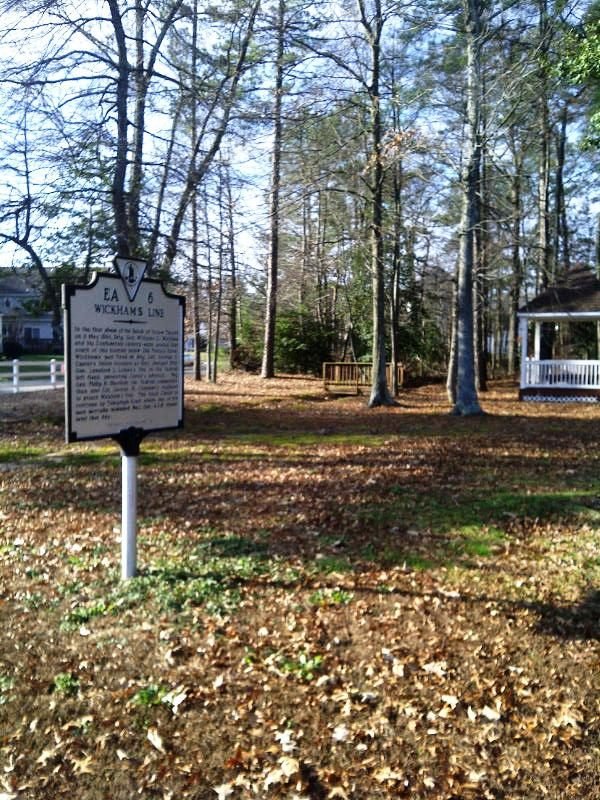 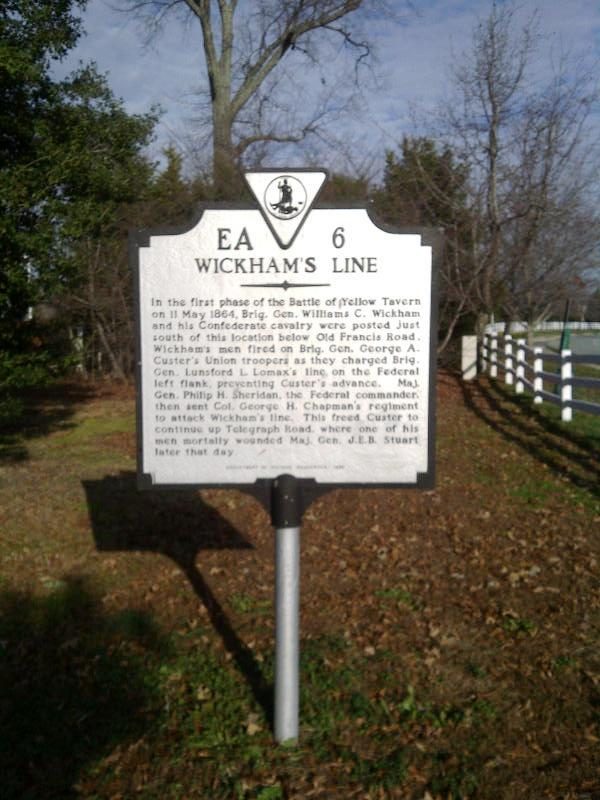 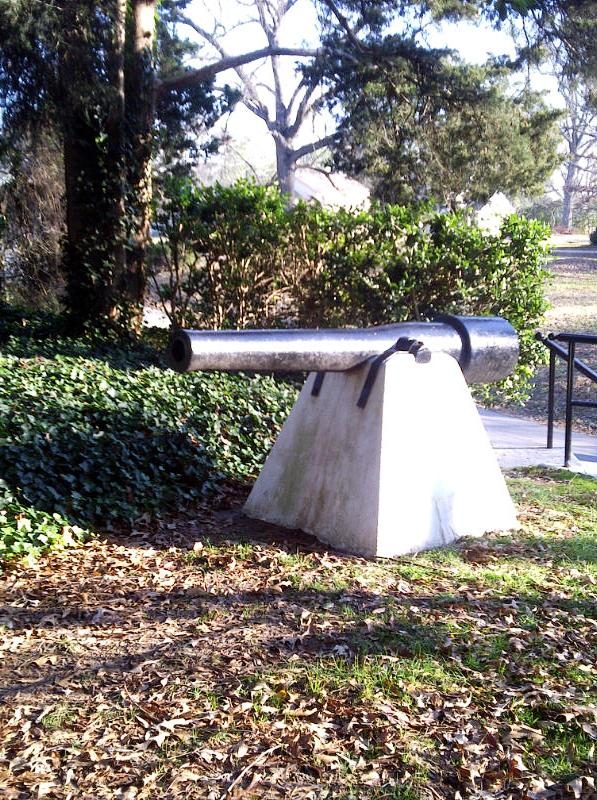 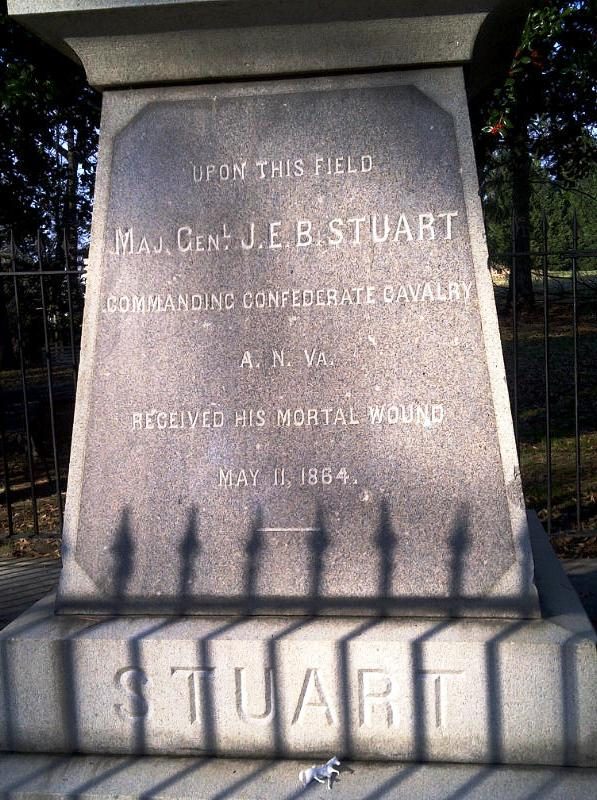 All photographs were taken December 14, 2011, at Yellow Tavern by Scott L. Mingus, Sr.