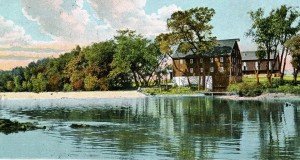 The Loucks Dam and mill on Codorus Creek north of York, Pennsylvania, was a prominent site during the June 1863 Gettysburg Campaign. Under orders from Major General Jubal Early, members of the famed Louisiana Tigers camped near here and guarded the mill site 24/7 to prevent unauthorized looting or vandalism. General Early then systematically cleaned out the inventory of flour as part of his deal with the York civic authorities to pay a ransom to the Virginia general in exchange for not burning the city. This mill provided flour not only to the East Coast of the U.S., but also exported it to South America in large quantities.

In this series, I will be presenting several old postcards of York County, Pa., sites associated with the American Civil War. Postcard collecting is a relatively inexpensive and fun hobby, with many vintage cards costing only a dollar or two. As a papermaker, I enjoy looking at the old examples of lithographic printing and classic paper stock. As an amateur historian, I like these vistas into the past. 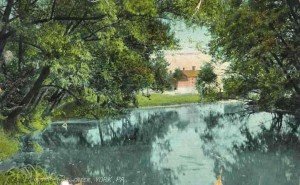 View of the Codorus Creek near York. Thousands of Confederate soldiers used the Codorus as a water supply for them and their horses, as well as a spot to bath and wash clothing. A series of bridges across the creek carried the Rebels into York from the west (Gordon’s Brigade) and north (Avery’s Brigade). 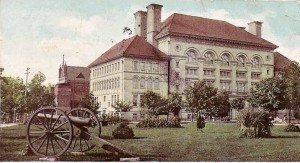 This old view of William Penn High School shows one of the four Civil War cannon that used to surround the Civil War Soldiers and Sailors Monument in Penn Park. The high school was not present during the Civil War, and Penn Park at the time was the site of a sprawling U.S. Army Hospital. The gun tubes are now mounted at Hanover Junction. 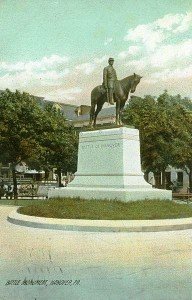 “The Picket” is a Civil War equestrian statue in downtown Hanover which commemorates the June 30, 1863, Battle of Hanover. Union cavalry under H. Judson Kilpatrick clashed with J.E.B. Stuart’s Rebels on the streets of the town and in the fields to the southwest. 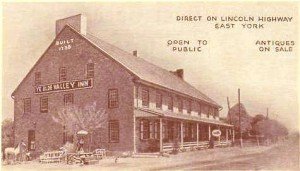 The York Valley Inn was a midday camping spot and rest area for Brig. Gen. John B. Gordon’s Georgia brigade as they paused on their march from York to Wrightsville on Sunday afternoon, June 28, 1863. They were headed for the Columbia Bridge and Lancaster County. This old inn is long gone, but many of the stones were reused to construct an office building at a York-area cemetery. 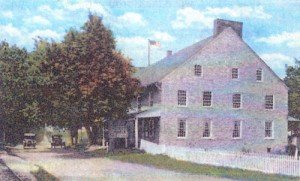 Another view of the historic York Valley Inn. Check out the two old cars to the left! This inn was built in the 1700s and lasted well into the 20th century before being dismantled.

Do you have any Civil War-related postcards to share? if so, please send a color scan to scottmingus@yahoo.com and I will post the images in a future installment of this series.