“Lincoln was not ugly,” reported an Ohio soldier with later family ties to York County 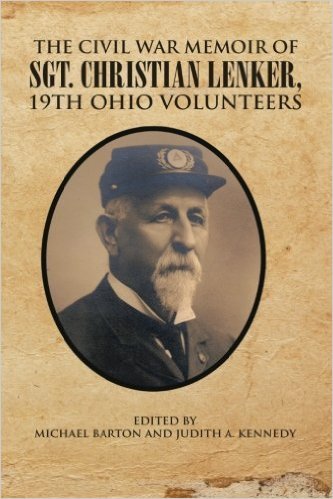 Michael Barton and Judith A. Kennedy, working with a group of students and history researchers at Penn State, have published the memoirs of Sgt. Christian Lenker of the 19th Ohio Volunteer Infantry. Kennedy, the great granddaughter of Sergeant Lenker, is a kinsman of York Judge John “Jack” Kennedy (who graciously provided a copy of selected excerpts from his great-grandfather’s memoirs).

Some fifty years after the Civil War, Christian Lenker, then a physician living in Schuykill Haven (near Pottsville, PA), sat down with a reporter to scribe his memoirs of his Civil War service. Lenker had been born March 10, 1842, in what is now called Lenkerville in Dauphin County (along the Susquehanna River immediately south of Millersburg). His father was a farmer and sawmill operator, as well as a county commissioner. As a young man, he moved west to attend Mount Union College in northeastern Ohio, where lived with a “rank Breckinridge [VP under President Buchanan and a Democratic candidate for president in 1860] advocate.” However, Lenker came to admire the Republican party’s principles and supported Abraham Lincoln in the election of 1860.

He joined an artillery unit in Stark County, Ohio, in the summer of 1861 after the war erupted and later served as a sergeant in the 19th Ohio. He recorded his memories of his war years in a series of newspaper articles. Those stories, coupled with other accounts, form the basis of Barton and Kennedy’s book.

While Lenker was a student at Mount Union (near Alliance, Ohio) before the war, he and his friends often debated politics, including arguing over the Lincoln-Douglas Debates and the merits of various political candidates. One of Lenker’s roommates believed that Lincoln would never be president, “that he was too ugly, too homely, that he looked like a gorilla, etc.”

On February 15, 1861, Lincoln paused in Alliance for dinner while heading east from Springfield, Illinois, on a train to Washington, D. C. for his inauguration.

Young Lenker recorded his thoughts on what would prove to be his only personal encounter with the president-elect:

“I wormed my way through the crowd so I could touch the steps which Lincoln had to descend while making his way to the dining room. When the car door opened, as soon as the people could see his face, a united cheer from thousands of throats made the welcome ring with loud acclaim. The first glimpse made an indelible impression upon my memory which will never be effaced. That gaunt, tall figure and haggard face, the angular, spare body, enclosed in a dark suit, not fitting, or seemingly not fitting.

“Above all was that face, which, once seen, could never be forgotten. There was something deeper than the exterior, something magnetic, transfigured, attractive, a benevolent and spiritual face, which seemed to make one feel as if it were the face of a friend, whom one had known for years. Lincoln was not ugly.

“With him was Colonel Ellsworth of the famous Zouaves, who, I believe was the first union soldier to lay down his life on Rebel soil. He was shot in Alexandria, Virginia, on the stairs of a hotel by the proprietor when Ellsworth was coming down with the Rebel flag which he had taken from the roof of the house. The assassin was immediately killed by one of Ellsworth’s men. Besides Ellsworth, there were others among them,” including Ohio Senator Benjamin Wade and General David Hunter.

The crowd implored Lincoln for a speech, but exhausted from the days of rail travel and discussions, he declined in his typical homespun humorous fashion, “My friends, I understand there is a turkey waiting for us in there in the dining room which needs our attention, and should I make a speech, we might get to Washington too late for the inauguration.”

Christian Lenker noted, “That was the only time I ever saw Lincoln and I never regretted the few miles walk to see him. Only a short time before, the Prince of Wales, the late King Edward of England, passed through the same place while making a very popular tour of the United States. I walked the distance to see a president-elect, but not to see a future king of the greatest empire in the world.”

To read more of Christian Lenker’s fascinating story of his Civil War experiences, pick up a copy of Michael Barton and Judith Kennedy’s book at your favorite local bookstore or on-line at amazon.