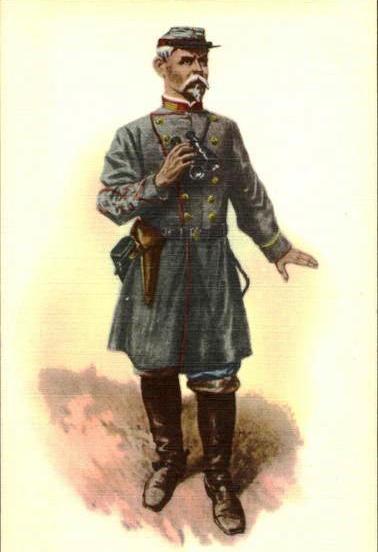 No more army life for me!

To many Confederates, Pennsylvania was a “land flowing with milk and honey, ” a place one amazed Rebel thought flowed with “such oceans of bread as I had ever seen before.” Food was plentiful, the farms fertile, orchards overflowing with fruit, and the climate fair. Hundreds of men straggled or deserted during the Gettysburg Campaign, and a few evaded capture and stayed in the area. Some came back to PA after the war and settled down, and several Pennsylvania cemeteries contain the remains of former Confederates who became Keystoners.

Descendants of Rebels still live in multiple communities, including a few here in York County.

Other Rebels headed to Canada, and some headed west to start a new life (often under an assumed name).

Typical of the deserters who never returned to their families were two Virginians in the Staunton Artillery. The veteran battery had been posted by Jubal Early south of York on Webb’s Hill, with the muzzles of their unlimbered guns facing the town. A couple crewmen slipped into York and were not present for their next roll call, and were in fact not seen again by their comrades.

During the Army of Northern Virginia’s retreat to Virginia, an angry Captain Asher W. Garber wrote a letter back home to his sister. In it, he complained, “[James] W. Fallon — I sent out an inquiry about him. Him & Michael Duneghee (Donaghee) deserted the company in York City and have not been heard of since.”

At Gettysburg, Garber’s Battery would be positioned with two other batteries from Jones’ Battalion on a ridge just northeast of where the Harrisburg Road crosses Rock Creek. From there, the guns blazed away at Barlow’s Division of the Union XI Corps on what is now known as Barlow’s Knoll (the area being cleaned and policed by members of the York CWRT in a few weeks). The CSA artillery position is one of the least visited spots in Gettysburg National Military Park and is today marked by a few cannons and markers on an obscure park road surrounded by houses. One artilleryman was wounded, and Garber fired off 106 rounds from his four guns.