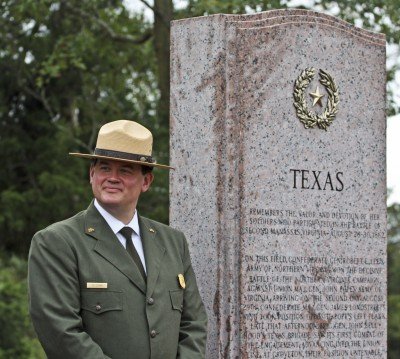 “Ed’s deep understanding of park operations and tremendous partnership skills – as well as deep connections to the Civil War community – make him the ideal candidate to lead one of the most significant battlefields in the nation, if not the world ,” noted National Park Service (NPS) Northeast Regional Director Dennis Reidenbach. “Ed’s network and skill-set will serve the park staff, community and visitors well.” While at Manassas, Clark has been a Service-wide leader for the Sesquicentennial of the Civil War and the broader Civil War to Civil Rights commemorative effort. Clark has also successfully managed Manassas through some challenging projects including bringing the park’s General Management Plan to conclusion and he has also worked to create a new sustainable organization during complicated political and financial times. He served as the acting Associate Regional Director for Operations for the National Capital Region of the National Park Service and the acting National Coordinator for National Heritage Areas for the Service. Prior to Manassas, he served as the Deputy Chief Ranger at Shenandoah National Park, and Supervisory Park Ranger at the Blue Ridge Parkway – among other posts. He is currently enrolled in the Senior Executive Service’s Candidate Development Program, identifying him as one of the Service’s most promising senior leaders.

“I am thrilled to have been chosen as the new Superintendent of Gettysburg and Eisenhower,” noted Clark. “These landscapes are some of the most iconic in our nation’s history. I’m very proud to be joining the excellent staff and volunteers of these sites and look forward to continuing to work with the many exceptional partners, while becoming involved in the local community.”

Clark is a native of Roanoke, Virginia and holds degrees from Radford University and Ferrum College. Clark is married to wife Heidi, and they have two children, Ben and Reid. Clark replaces Superintendent Bob Kirby, who retires on January 3rd. Ed Clark will begin his new position in early February.