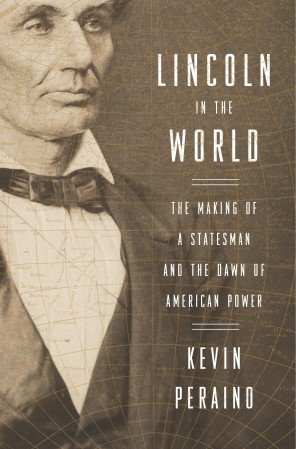 Hundreds of books have been written about Abraham Lincoln, the 16th President of the United States. Many focus naturally on his conduct of the Civil War and/or his dealings with the slavery emancipation question. Some deal more with his congressional years or his other antebellum activities. Few, however, have dealt in depth with his foreign policies while president.

Kevin Peraino has filled in that gap with his interesting new book, Lincoln in the World: The Making of a Statesman and the Dawn of American Power. The book is divided into six rather lengthy chapters, each focused on a particular aspect of his relations with other world powers and key events.

It is generally in chronological order and covers Lincoln’s emerging views on the United States’ place in the changing world of the mid-19th century, beginning with his Mexican War debates with his law partner William Herndon while Lincoln was in congress through his world views at his inauguration. The focus then shifts to the early war years, viewed through Lincoln’s dealings with Secretary of State William Seward, an early political opponent who eventually became a strong partner to the president.

Peraino deals extensively with the Lincoln Administration’s interactions with Great Britain and in particular Lord Palmerston. The British question was a complex one, with many in the island empire either openly or tacitly supporting the Confederacy in its quest for independence. At times, there were very real concerns that the British, with their base in Canada, might enter the war on the Southern side, or at least provide other support beyond arms.

His next section on Karl Marx has drawn some criticism in some of the reviews as there is not as much clear direction from Lincoln’s writings on his views of Marx’s doctrines, such as they were in the 1860s before the socialist icon fleshed them out in later years.

Peraino also explores Lincoln’s relationship with Mexico, where the Emperor Napoleon III was seeking to expand French influence. It would remain a concern of the president’s throughout the Civil War because of its proximity to the South and historic ties.

Lincoln in the World