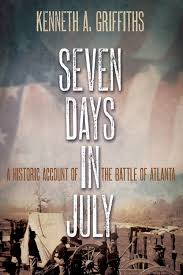 Normally I do not read or review historical fiction (for time and interest reasons), but my friend Jim Schmick of the fine Civil War and More, Inc. bookstore in Mechanicsburg, Pennsylvania, referred the publicist for author Kenneth Griffiths to me. I soon received a copy of a fine new book on the battles for Atlanta, Georgia.

Griffiths’ new book, Seven Days in July: A Historic Account of the Battle of Atlanta, is not your garden-variety historical fiction (most are high on fiction and low on history; hence my general distaste for the genre). I found Griffith’s book to be the exact opposite — it’s a carefully researched, well documented history of William T. Sherman and his subordinates as they attempted to move their Union forces into position to capture the important rail center of Atlanta. From there, Sherman would launch his famous (infamous in some quarters) “March to the Sea.”

The author does invent some well-crafted hypothetical dialogue and interchange between key characters in this new book, but these conversations are realistic and in the general spirit of what the actual men could have said in the various situations in which Griffiths places them.

Unique to this book is how the author handled telegrams, letters, written orders and other hard copy communications between the generals. Griffiths has placed transcripts of these communiques in distinctive graphics (faux telegrams, for example, as well as simulated letters, etc.). It’s an interesting approach, as is his non-intrusive way of handling footnotes (period icons with numbers which point the reader to an appendix with more detailed side information on the particular topic. These innovations work well in the context of the book.

Seven Days in July satisfies the reader looking to gain a working knowledge of the fight for Atlanta, but in a format which is both educational and entertaining at the same time. The dialogue is more convincing, for example, than Gods and Generals or similar historical fiction, while maintaining the historical accuracy of the battle action, troop movements, defensive actions, and tactical and strategic concerns.

In the general style of Michael and Jeff Shaara’s earlier works, author Kenneth Griffiths alternates each short chapter (118 of them!) from the particular viewpoint of several different combatants from each side. This provides a distinctive perspective which is at the same time both interesting and informational. The “voices” range from General Sherman to a lowly Western sharpshooter, with many characters in between, including Kenner Garrard, Arthur Manigault, Joseph Wheeler, and James B. McPherson.

This is a useful and compelling work which makes for a good read. It flows well, despite the constant change in perspective, and is crisp and easy to read. Seven Days in July is a welcome addition to the pantheon of Civil War historical fiction and stands alone as the finest such work I have seen on any aspect of the Western Theater.

For much more information, please visit the publisher’s website.

Kenneth A. Griffiths, Seven Days in July: A Historic Account of the Battle of Atlanta, Indigo River, 2015, 563 pages, softback.