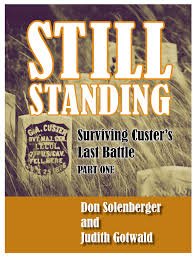 First, I must begin by mentioning that I am not a fan of historical fiction and do not regularly read the genre. In my limited reading time, I much prefer non-fiction. That said, many years go I bought, read, and very much enjoyed Douglas C. Jones’ riveting and well written novel The Court Martial of George Armstrong Custer. I have reread that paperback several times over the years and continue to find it an easy and interesting read.

Usually I turn down requests to read and review new historical fiction titles. However, when I was asked if I would consider reviewing Still Standing: Surviving Custer’s Last Battle – Part 1 by Don Solenberger and Judith Gotwald, I agreed.

That proved to be a good decision.

Like Jones’ much older work, Solenberger and Gotwald base their book on the premise that somehow George Armstrong Custer miraculously managed to survive the swirling Sioux and Cheyenne warriors attacking his position on what later became known as last Stand Hill on June 25, 1876. However, both books take radically different approaches to the hypothetical supposition that Custer came back alive.

Jones begins with Custer’s survival and then has the former Civil War “boy general” endure a long and trying court martial in which his subordinates re-examine his leadership and tactical decisions at Little Big Horn. It’s a well written, and at time tense, court room drama with a very satisfying ending.

Solenberger and Gotwald take an entirely different angle. The book begins with a brief look at the boyhood Custer (and his eventual opponent Crazy Horse) and then quickly dives into the budding romance between the young military officer and his eventual bride, Elizabeth Bacon. With the focus on Libbie, the authors weave a plausible and highly readable tale of their first trip together back east, filled with political hacks who are seeking Custer’s support and other traveling companions. The Custers meet some of the bosses and movers and shakers of New York City, and then decide that army life is more fulfilling than partisan Democrat politics. They go west, endure the frontier, and then comes the fateful June expedition to the Little Big Horn. Libbie gets the news, comforts the other grieving widows, and then goes on with her life.

And then the twist happens… a mysterious new character enters the picture, one that happens to remind Libbie of her husband.

The book is written in two parts. Part 1 is now on sale at amazon.com and other on-line retailers. Part 2 has not yet been released to the public. I look forward to continuing the saga of Libbie Custer and her curious new friend Song Skyler.