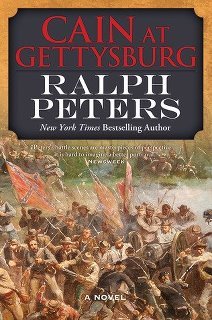 Over the years, several novels centered on the American Civil War have proven to be very popular, including The Red Badge of Courage, Gone With the Wind, the Pulitzer Prize winning Andersonville by MacKinlay Kantor, and the classic Killer Angels, which provided the inspiration for the popular movie Gettysburg. More recently the novel Cold Mountain became a hit movie with Jude Law.

Now comes another work of Civil War fiction which could over time join the list of favorites — Cain at Gettysburg by Ralph Peters. The Gettysburg Campaign was one of the pivotal events in the bitter Civil War and has been covered in detail in more than 1,000 books, including several I wrote. However, many of the fictional accounts of the fighting at Gettysburg have not been satisfying, and some stray so far from the actual battle as to border on absurd.

Not so with Peters’ new book. The author has nicely captured the spirit of the times, as well as the intensity of the battle and its terror and pathos. Compelling characters, believable dialogue, crisp narrative of the battle scenes, human interest stories — all abound in this fascinating work.

Ralph Peters, a former U.S. Army officer, clearly understands the inner thoughts and emotions of a soldier and neatly conveys a “you are there” atmosphere into which he has woven a rich tapestry of the leading characters (both fictional and actual participants) in the battle. His military training and experiences, coupled with his New York Times best-selling writing ability, provide the power behind the prose in this marvelous new book which is sure to remain popular for years.

Pick up a copy of this finely written story and you will not be disappointed. Move over Cold Mountain — you have company as the best Civil War novel of the recent decades.

429 pages in the hardback edition