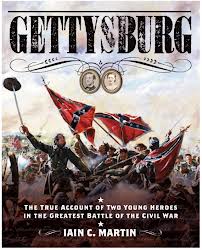 Iain C. Martin is a Connecticut-based writer and blogger on the Civil War, whose previous titles include The Greatest U.S. Marine Corps Stories Ever Told.  He maintains the Touched With Fire blog on the Civil War years. Martin holds a masters degree in history from Southern Connecticut State University.

His latest book, set for publication shortly, is a book on the 1863 Battle of Gettysburg targeted at the market for young adults and teens, especially those who are seeking a good, basic overview of the fighting, personalities, context, and outcome. Simply titled Gettysburg, Martin has geared this for younger readers who may be first reading about the subject material. The first time certain terms appear in the text, he has bolded them. The reader can then refer to a glossary at the back of the book for basic definitions of the new or unfamiliar terms, a good idea for pre-teens and other new readers of military history.

Martin presents the material in chronological order, with a brief introduction and then a short essay adapted from the words of teenaged witness Matilda “Tillie” Pierce concerning Jubal Early’s June 26, 1863, occupation of Gettysburg (a subject I am always glad to see mentioned in Civil War books because of my interest in that day’s fighting which I cover in detail in my book Flames Beyond Gettysburg). Young readers will become further acquainted with Tillie as the book progresses, as they may likely relate to what it was like for a young adult resident to live through the 3-day battle.

Chapters One and Two discuss Robert E. Lee’s plans for the summer campaign; his reasons for going North; some expected or hoped for outcomes; and the march into Pennsylvania. Illustrations, photographs, and excellent maps by Hal Jespersen help tell the visual story of the Confederate invasion and the subsequent bitter fighting at Gettysburg. Jespersen is rapidly becoming one of the most prolific and sought-after mapmakers for Civil War books, and author Martin has made liberal use of Hal’s maps, which are a very useful addition to the book.

Each of the three main days of fighting has its own chapter, as well as a chapter on the aftermath of the battle, including the initial retreat and Meade’s pursuit and the impact of the fighting and the casualties on the residents of central Adams County.

Martin is not intending to break new ground in Gettysburg, so the battlefield veteran may at first dismiss this book as being too much of a general overview. However, his target demographic are the teenagers and pre-teens who may be making their first visit to the region, or want to learn more about the historical events in the fields and ridges around Gettysburg. As such, this is one of the better introductory books, one that I would recommend to parents and grandparents looking to give such a book to their family members. It would also work well as assigned reading material for a school setting, for book reports, or for small group discussion, or a teen book club.

Martin includes a brief bibliography of selected books by other authors which young readers might enjoy as they dive deeper into the subject.