New book! The Civil War in Pennsylvania: A Photographic History 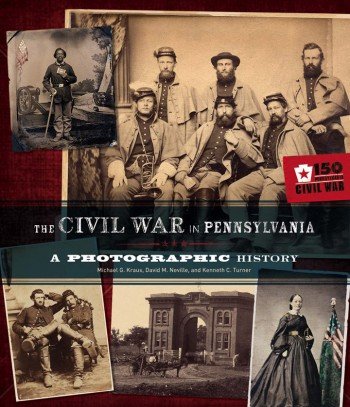 Ken Turner has amassed one of the largest private collections of Civil War photographs in the entire country, with a focus on Pennsylvania-related topics such as soldiers, places, civilians, and events. A small portion of his holdings have been professionally photographed and used to illustrate a wonderful new book from the Pennsylvania Heritage Foundation in time to commemorate the 150th anniversary of the invasion of the state during the American Civil War.

The Civil War in Pennsylvania: A Photographic History has been officially endorsed by the Pennsylvania Civil War 150 committee. Written by Michael G. Kraus, David M. Neville, and Kenneth C. Turner, this book is a broad reaching compilation of images and topics ranging from the state’s military hospitals to its battlefields, civic and military leaders, civilians, factories, and post-war veterans’ organizations. More than 400 photos and crisp prose tell a well rounded story of the state’s involvement in the war effort.

The photographs include rare, unpublished carte-de-visite images of common soldiers from the state, as well as the leading generals and political leaders who helped shape and mold Pennsylvania’s policies during the war years. A reasonable portion of the book is focused on the Gettysburg Campaign, perhaps the most traumatic event during the war for Keystoners, particularly those in South Central Pennsylvania. With so much ground to cover, the authors did not have the time to dive deeply into any one issue or topic, and instead wisely chose to tell as broad of a story as they could. Women, race relations, the pacifist movement, the industrial might, railroads & transportation routes, soldiers, battles — nearly every major topic is represented.

Written by a trio of memorabilia collectors documenting the Civil War in Pennsylvania, the paperback book presents a large selection of images, some of which have never before been published.

The authors are Michael G. Kraus, curator of collections of the Soldiers and Sailors Memorial Hall and Museum in Pittsburgh; David M. Neville, a military historian specializing in the Civil War, publisher of “Military Images” magazine and co-writer with Kraus of a DVD documentary series entitled “Civil War Minutes”; and Kenneth C. Turner, a writer and researcher for a number of Civil War-related magazines and projects, including the Time-Life “Civil War” series.

The book was published by the Senator John Heinz History Center for Pennsylvania Civil War 150.

Turner has amassed one of the largest privately held collections of images and memorabilia related to the Civil War in Pennsylvania. It includes recruiting posters, presentation swords, inscribed corps badges, letters and weapons.

In his foreword, Edward L. Ayers, president of the University of Richmond and author of “In the Presence of Mine Enemies: Civil War in the Heart of America,” emphasizes that “the 150th anniversaries of the American Civil War and Emancipation offer us a great opportunity and a great challenge. More than at any time since those momentous events, we have a chance to see them fully and clearly.”

Works by notable 19th century photographers represented in the book include Matthew B. Brady, Timothy Sullivan and Frederick Gutekunst.

This fascinating and well crafted commemorative book is available from the state’s PA Civil War 150 website and at bookstores throughout the commonwealth.